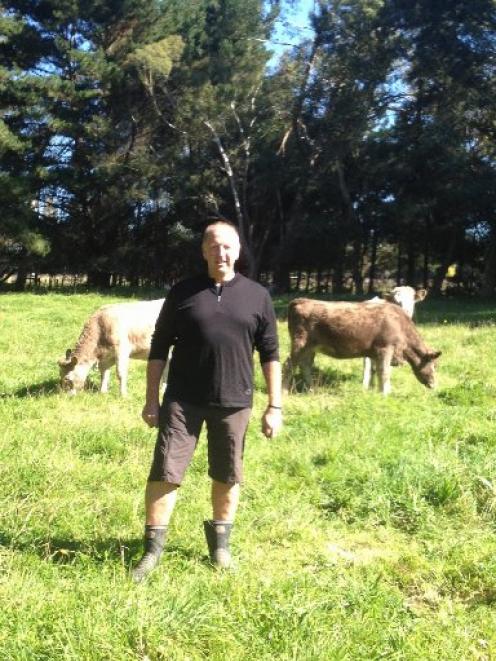 1986 Young Farmer of the Year Russell Whyte. Supplied photo.
Russell Whyte knows exactly the pressure the seven grand finalists in the National Bank Young Farmer Contest will be feeling when they arrive in Dunedin this month.

Mr Whyte, now living in Christchurch, won the Young Farmer of the Year title back in 1986 - the last time Dunedin hosted the grand final.

He described it as a "fantastic" experience, which was followed by an "amazing opportunity" to travel to the UK, as part of the prize package, which also included a tractor and motorbike.

Mr Whyte was farming at Mamaku, near Rotorua, when he qualified for the grand final, representing the South Auckland region.

Before that, he had graduated from Lincoln University with a bachelor of agricultural science and then worked as a farm adviser.

Busy farming 6000 stock units during a difficult period for New Zealand farmers - "1986 was not a very clever time to go farming" - there was little time to study for the Young Farmer competition and was virtually limited to his wife testing him with questions at nights.

But he was fortunate he had wide experience from the variety of farms he had been involved with, including sheep, deer and cropping.

Brought up in Mid-Canterbury, Mr Whyte recalled how he called to see his mother on his way south to the grand final. Since it was being held in Otago, she suggested she show him how to prune an apple tree - but he told her he did not think that was important.

Sure enough, pruning an apple tree was one of the tasks in the practical section and his performance was "not so good".

"I should have listened to Mum," he said.

Another fond memory was a speed event - a precursor to today's popular agrisports - although back then it did not contribute to the points table.

A variety of tasks, from running out an electric fence to loading bales of hay on to a motorbike, had to be completed in a race-like format which proved enjoyable and also popular with spectators.

Mr Whyte believed his own strength was his "all-roundedness" and his ability to think and handle the pressure.

The evening Young Farmer of the Year session proved particularly stressful, as it was being screened live on television but there had to be breaks for advertisements. It was compered by television personality and now Christchurch Mayor Bob Parker.

After leading up to half-time, Mr Whyte found himself suddenly falling behind, but after "cleaning up" in the final buzzer round, he won by one point. Otago-Southland representative Peter McNab - a Lincoln class-mate - was fourth.

Mr Whyte has always maintained an interest in the contest - "the competition is fantastic and long may it last" - and he is also delighted to see the revival of the Young Farmers movement throughout New Zealand.

Now a director of Agritech Management and involved in corporate management of farms, he said farming was still very much his world and something that he was very passionate about.