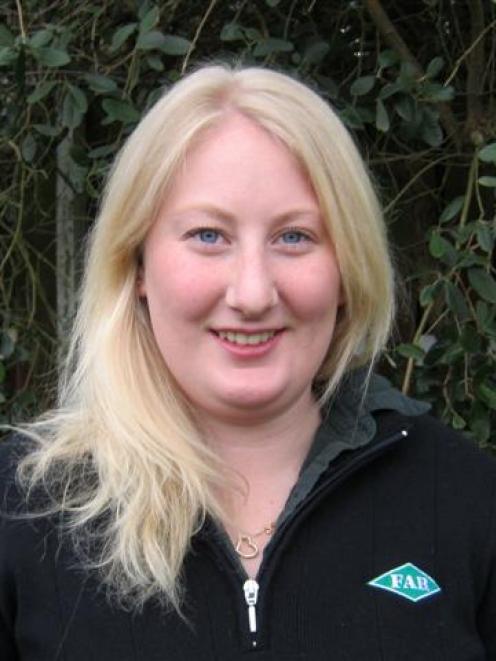 Brought up in a farm in northern Southland, she recently completed a bachelor of science degree at the University of Canterbury, majoring in biological sciences.

She is quite new to the arable sector, having come from a sheep and beef farm near Lumsden, and it was a good opportunity to "be right there in the industry and learning hands on".

Arable farmers recently voted for the continuation of Far. The fourth referendum of growers showed that the arable, maize and cereal silage communities were significantly in favour of Far investing its levy funds into research and extension.

Ms Priergaard-Petersen admitted she started out with virtually no knowledge of the industry but that knowledge was definitely growing.

She was grateful for the support of her colleagues, saying it was like having a personal tutor. "I'm learning some new stuff every day."

She was also enjoying meeting those involved with the industry, along with farmers who hosted research trials on the properties.

While at university she became interested in biological sciences, particularly environmental and biosecurity issues.

Agriculture was such a leading field in New Zealand she decided it was going to be the best workplace opportunity for her.

"Having the opportunity to work with the arable sector, while still having the ability to work in the area of biosecurity, is a fantastic opportunity for me to upskill in this area which I am so passionate about."

She is researching biosecurity risks which could have adverse effects on the New Zealand arable industry if introduced, including weeds, pests and diseases which have had major impacts on arable industries in other parts of the world.

Although she will be working predominantly in the South Island, she will be required to make occasional visits to Australia and the North Island to do trial assessments.

With a specific interest in biosecurity and bio-control management, she will work closely with Far chief executive Nick Pyke in those areas.

Planning and assessing research trials, protocols, treatment and designs will be a key constituent of her role, with the management process of these trials such as application of nutrients, cultivation, water and agrichemicals.

Every day was different, whether it was going out and assessing crops, or scribing for Far staff, or doing statistics on rainy days.

Ms Priergaard-Petersen was also passionate about sustainable practices and looking at how to manage a farm in an environmentally friendly way while also being economic.