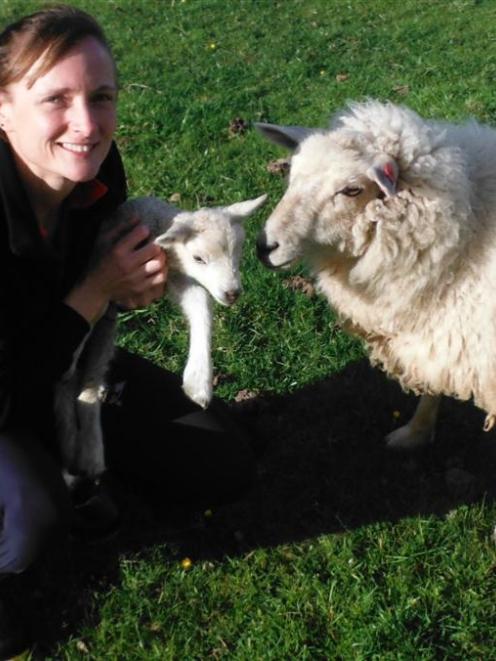 Research physiologist Dr Sue McCoard, from AgResearch's Grasslands campus in Palmerston North, is finding better ways of measuring brown fat stores in animals. Photo by AgResearch.
Not all fats are created equal, and work by AgResearch is looking into how this knowledge can help reduce lamb deaths.

In good conditions, mortality of twins and triplets is below 10% and 20% respectively, but in poor weather conditions it can be much more.

Many of these deaths occur in the first three days of life, often because the lamb is unable to generate enough body heat to keep warm during periods of extreme weather.

Immediately after birth and until they get a feed, lambs have only one main way to regulate and maintain their body temperature: burn ''brown fat'' to generate heat.

Previous work at AgResearch looking at the effects of various maternal supplements on lamb birth-weight and growth performance also saw an increase in brown fat stores.

She received a $35,000 Curiosity Fund grant, which is a seed fund enabling AgResearch staff to investigate ideas that could benefit the pastoral sector.

Her project has been looking at using thermal-imaging as the first non-invasive way to measure the amount of brown fat in the body, and what could possibly increase brown fat deposit in multiple newborns.

''For the first few days of life, newborn lambs are reliant on the brown fat.

''This is particularly important if they are born in challenging circumstances such as storms, where chill index is high, or if they don't have much milk to drink,'' Dr McCoard said.

''Thermo-imaging is being looked at as a non-invasive way to gauge the amount and availability of brown fat carried by each animal.

''Previous to this, the only way to measure brown fat in the body required the slaughter of animals.''

Increasing prolificacy in sheep is a cost-effective approach to increase the efficiency of meat production in a sustainable manner.

An increase in multiple pregnancies is one of the reasons lamb production in New Zealand has been maintained despite reductions in the number of breeding ewes in the past 20 years.

However, twins and triplets are usually smaller at birth and suffer increased mortality early in life compared to their singleton counterparts.

''Increased lamb survival, and increasing the number of live lambs that can be sold or used as replacements, will make a major contribution to the welfare and economic outcomes of lamb production on New Zealand sheep farms,'' she said.