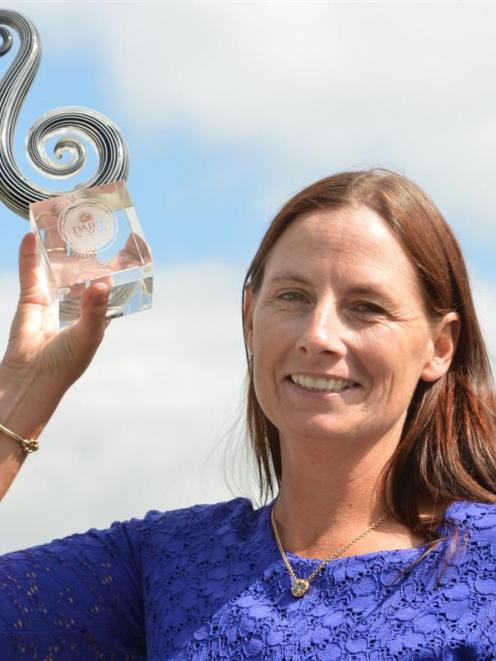 Katie Milne is a straight shooter.

So it's not hard to imagine those attending a meeting on the West Coast, in the early 1990s, took notice when she went along with some concerns about the Resource Management Act's impact on her ability to farm.

There were a large number of Federated Farmers people there, but they were ''all older fellas with grey hair''.

''I think they were pretty shocked to see a young 23 year old bird there. I did ask a couple of questions as well. I think that was that ... the die was a bit cast,'' she recalled.

Soon after, Ms Milne became involved in Federated Farmers and, since then, she has moved through the ranks of the farmer lobby organisation.

Following her success in the Dairy Woman of the Year, Westland Milk Products chairman Matt O'Regan said the award was fitting recognition for her ''passionate dedication'' to dairying on the West Coast and, through her work with Federated Farmers, as a national advocate for the industry.

''She has a practical but compelling approach that commands attention, and she has made a significant contribution to ensuring that farming has a sustainable future in New Zealand,'' he said.

Federated Farmers national president Dr William Rolleston said Ms Milne's can do attitude and ability to break down barriers by communicating at all levels made her ''incredibly influential in the agri political space''.

''She is a practical, no nonsense farmer with a bright outlook on life and this resonates through her advocacy with the federation,'' he said.

Citing the calibre of the other finalists - Andrea Murphy (Alexandra), Elaine Cook (Waikato) and Wilma van Leeuwen (Waimate), Ms Milne had convinced herself she was not going to be the winner.

So when the announcement was made, she was ''quite surprised and shocked'', but s also ''thrilled to bits and very humbled''.

Her credentials - and workload - were impressive, yet she shrugged off any suggestion of a superwoman label, instead citing how fortunate she was to be surrounded by good people.

She was now in her third year as a national board member of Federated Farmers- only the second woman on the board - and sits on the National Animal Welfare Advisory Committee, advising the Minister for Primary Industries.

She is on the Farmers Mental Wellness Strategy Group, partnering with stakeholders on improving farmer wellbeing, and is Federated Farmers adverse events spokesperson. She is also in her sixth year as the federation's West Coast provincial president.

She is West Coast chairwoman of Tb Free and and previously a member of the West Coast Focus Farm advisory board.

She has also been a management group chairwoman for Sustainable Farming in the Lake Brunner Catchment Project, which works with local authorities, the Department of Conservation and the community to help manage, protect and improve the lake's water quality.

To top it off, Ms Milne has been a member of the local volunteer fire brigade for the past 15 years.

Ms Milne and her partner Ian Whitmore run 200 Jersey cows on a 125ha farm which has been in the Whitmore family for more than 90 years. They supply to Westland Milk Products.

They also do some local contracting, making baleage, pit silage, and effluent spreading via slurry tanker and muck spreader.

Ms Milne's heritage was in sheep and beef and she still had relatives farming in South Westland. School holidays were spent down there ''running around on the farm'', and anything to do with the outdoors and nature was where she wanted to be.

Her mother was the farmer in their family, while her father was an accountant. Helping her mother on the farm after school was a regular pastime and it gave her a good grounding in farming.

Back in the day when Ms Milne was a meat inspector in the local freezing works, little did she realise how useful those skills would be later in life.

''Standing there at the gut tray, inspecting lymph nodes, I certainly didn't see down the track that would be a useful experience,'' she said.

Rather, at the time, it seemed a way of getting rid of the mortgage between milkings, she laughed.

The couple had gone sharemilking when drought hit in 1988 and she recalled it being a ''dreadful'' time.

''It didn't defeat us but it nearly did,'' she recalled.

They decided they needed to do a stocktake, have a look around somewhere else and make a call as to whether they wanted to continue in the dairy industry.

So they lived in Alberta, Canada, for two years, before deciding to return home and get back into dairy farming.

They looked at various options and bought Mr Whitmore's parents' farm, as they were looking to retire.

It was around that time the Resource Management Act came into being. With a river boundary on the property, it got Ms Milne questioning what it all meant and that led her to the meeting which inadvertently sparked her involvement in Federated Farmers.

If a farmer did not put their hand up and stick up for farmers, then well meaning people in regulation and legislation would ''put something on you'', without consultation, and that was too big a risk for farming businesses, she said.

''You can't let someone who knows nothing about land, rivers, animals, making decisions for us about land and rivers and animals,'' she said.

Asked how she managed her workload, Ms Milne said a full time staff member, employed in the past few years, handled most of the day to day milkings.

But she still reared all the calves, was involved in management decisions, and did all the farm's bookwork.

She tried to organise her time, but that had got a little harder ''as more things have come along''. Asked how she coped being thrust into the media spotlight, given her role as adverse events spokeswoman, Ms Milne said it was initially ''quite ironic''.

One of the first events she had to deal with was drought and, to be sitting looking out at green grass at home, getting asked questions about how tough it was and what farmers were going through, she would have preferred to be able to speak ''exactly from the same position'' - staring at barren, brown paddocks and praying for rain.

But sometimes, she acknowledged, it was quite useful to be removed from it, so she could see it without the same amount of emotion.

Whatever she was commenting on, Ms Milne endeavoured to express it in a way everyone could grasp, including those who knew nothing about farming.

For that was a big challenge and one that she was keen to help address; getting the ''rest of New Zealand understanding us''.

She wanted urban New Zealand to ''get it'' - that farmers were doing things that were good for animals and the land, that they were stewards of the land and had good husbandry skills.

A classic example of not understanding was the ''chatter'' at the moment over shelterbelts being removed to make way for precision irrigation systems, and how farmers were ''a bunch of greedy buggers''.

Farmers she had spoken to were ''absolutely gutted and devastated'' about having to remove trees they planted 30 years ago, or the previous generation had planted, and it was a ''really tough call for them''.

Work was being done on different types of plantings that could be planted underneath irrigation and there would be shelter again, it would just ''take a bit of time''.

They would not be the ''tall, tall trees'' that people were used to, but shorter, native types and, as far as biodiversity went, that was `going to be really cool''.

''It's going to be different but we're going to get there,'' she said.

Precision irrigation was necessary ''to do all the things we need to do'' - have good outcomes with nutrient management and be efficient with water.

That was probably an example of why she ended up putting her hand up for things.

''That's were people don't get what we're doing and are making rules and regulations around us ... making decisions without fully understanding.''

Asked whether she had aspirations to be the first female national president of Federated Farmers, Ms Milne said it was not her intention.

While she would never rule anything out - ''you never know what happens'' - she was more an issues person, who was very forward thinking in some things, ''but not necessarily personal aspirations''.

''Really for me, I'm just bloody on this train and its going somewhere ... and I'm enjoying going with it. Wherever it takes me,'' she said.