Champion schooled in some hard sheds 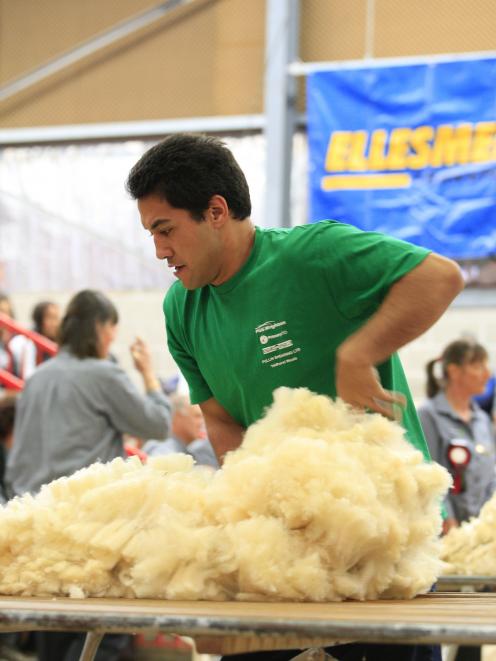 He left school when he was about 11 and continued his studies through correspondence.

Sometimes he accompanied his mother, who worked as a shedhand, and would "help out a bit and play around" in the woolsheds.

"School wasn’t really for me, not back then. I didn’t really like school," Henare recalled.

By the time he was 12, he was entering woolhandling competitions, making his debut in Alexandra in 2004 and  making the junior woolhandling final.

From there, his progression in the sport was phenomenal and, a decade later, he became the country’s youngest woolhandler to be awarded master status.

Now Dunedin-based, Henare is preparing to represent New Zealand for the third time at the World Shearing and Woolhandling Championships in Invercargill from February 8-11.

Henare continued his correspondence studies until he was 15 — the age when he  became an open woolhandler. That year  he was granted an exemption by the Ministry of Education to cease his school studies. Ten years on, there was "nothing really much left" for Henare to achieve, having attained his master status and a world champion title.

"I just want to keep the training alive so the industry doesn’t dissolve," he said.

Asked what he enjoyed about woolhandling, Henare said it was something he was good at.

"A lot of people can do it; for me, I like to stand out ...  from the average Joe. I like to be different and take it to another level."

Making the New Zealand team was always a good feeling and he was in the team for the world championships in Masterton in 2012, where he claimed the individual world title, and in Ireland in 2014.

"To be able to wear a Silver Fern is the ultimate feeling. The people that have trained me, I feel I’ve done them proud," he said.

When Henare dropped out of school, he encountered many older woolhandlers in sheds who had been in the industry for many years.

"They knew everything. Just sitting there, listening to them, they passed on a lot of helpful knowledge.

"I’ve learned from the best teachers ...  the best New Zealand has ever seen," he said.

He singled out legendary woolhandler the late Joanne Kumeroa and Tina Rimene for their assistance.

Kumeroa was a good friend of his mother’s and the pair competed together, representing New Zealand at the world championships in Masterton. He learned a lot about "mental thinking" from her.

Rimene "put a lot of hard yards and time" into Henare; not just woolhandling but life skills in general.

"She took me under her belt like a mum," he said.

Henare is feeling confident ahead of the championships, saying confidence  is a necessity.

"It’s all about keeping positive, looking for the best outcome.

"Ninety per cent of winning comes down to the top two inches, the mental part of it. It’s really nothing to do with your hands or the physical side of it. Training the mind, that’s what will get you through."

It was great to have the championships on "home turf" as woolhandling in New Zealand was different from most other countries that would be competing.

"We do things a little bit different here. We separate way more types of wool. The majority of the other 30 countries that have woolhandling don’t do what we do. It’s very challenging for them to come here," he said.

Once the championships were over, Henare was looking forward to spending more time with his wife and three young sons.

He was also keen to do some studying and "get a real job". Woolhandling was seasonal and work depended on the weather  and, with a young family, a more permanent job would be appropriate, he said.

Proud of your woolhandling achievements m8..always knew you where going to be in a league of your own. You have a "magic" that cannot be taught or copied, consistent, thrilling, and you do it in your own special style and you are a true champion!