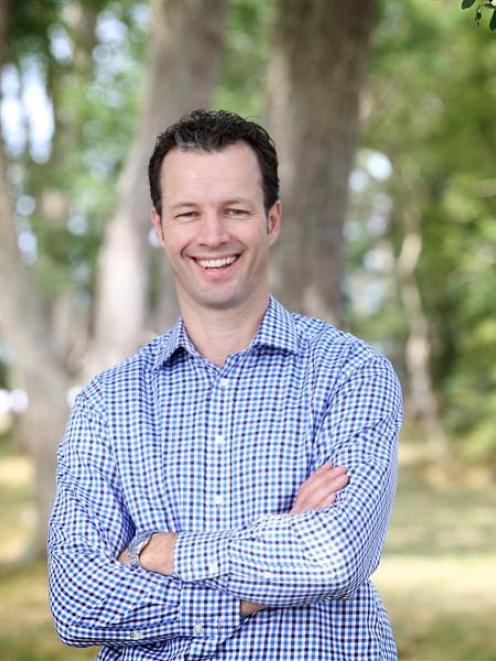 Brought up on a Kaikoura dairy farm which has been in his family for generations, farming is in his blood.

His intention was to go to Lincoln University, complete his tertiary studies and then return and farm alongside his brother.

But he got ''sidetracked'' by the science and business aspect and was encouraged to follow that path.

He figured that even though he was not milking cows, he was happy as long as he was still involved in the agricultural industry.

After graduating with a degree in agricultural science with first class honours, Dr Mackle worked for the Dairying Research Corporation (DRC), which was established as a joint venture between the New Zealand Dairy Board and AgResearch to provide on farm dairy research and development.

He then took leave and headed to the United States with his wife Aroha to do a PhD in animal, food and nutritional sciences at Cornell University.

His wife, who came from Invercargill, also studied and worked while there and it was to prove to be a very interesting and useful experience, Dr Mackle said.

He returned to DRC but then found he had a ''bit of an itch'' to do the business side and he joined the Dairy Board, which led to corporate work for Fonterra and then sales.

From there, he was appointed chief executive of Dexcel, which later merged with DairyInsight to form DairyNZ, the dairy industry good body, of which he was the inaugural chief executive.

The reason for its existence was to help farmers and that was what attracted Dr Mackle to the role.

What he loved most was going out and talking to farmers, which was also ''the best reality check''.

''It's very easy to get caught up in strategy and targets and investment and projects and all that. If you don't keep in touch with what farmers are seeing, thinking and feeling, you lose touch,'' he said.

With his brother Simon running the family farm at Kaikoura, he was still very much in touch with what was happening on the farm and he also received ''plenty of feedback''.

He felt very fortunate that DairyNZ had such a fantastic team and had attracted such good people. That had a snowball effect and it was an ''absolute privilege'' to be part of such a team.

It was a busy role but it was helped by having that good team at work and also at home. He and his wife have four children.

When it came to the current situation in the dairy industry, it was different than in the past and it was prudent to plan for the trough going on a little bit longer than it had in the past. The medium to long term outlook was still very positive, Dr Mackle said.

Being a resilient farmer meant having an understanding of what was ahead, having a plan and, most importantly, executing that plan. He urged dairy farmers, who were facing a low payout this season, to know where they were at.

''We've got some challenges but tactics are in place at an industry level. You need your own plan too. We all need to execute our plans really well if we are to build a resilient industry,'' he said.

The most successful companies through the global financial crisis, particularly in the United States, developed a plan quickly and then executed it well, adapting quickly along the way.

For owner operators, now was the time to ''get back in the business'' and to ''know where the juice is to get out of the orange'', he said.

For sharemilkers, contract milkers or managers, it meant they needed to make sure they were not spending excessive amounts of time on operational matters.

There were farmers around the country who were ''feeling the pain'' and they needed to look after themselves.

There were plenty of good people around and organisations such as the rural support trusts and Federated Farmers that could help.

The dairy farming industry was becoming more complicated and complex, with new challenges and drivers having to be dealt with.

There were limits being imposed, greenhouse gases ''haven't gone away'', consumers and the public were having more of a say about how farmers farmed, and having people with the right skills in the industry was going to be more important.

That was all against the backdrop of ''other people wanting to play in our sandpit'' from overseas.

If you could not do anything about other people's aspirations, then the focus had to be on brand, image, competitiveness, and farming in a way that made New Zealand a ''first choice'' when it came to its dairy products.

The implementation of the National Policy Statement for Freshwater Management was variable throughout the country depending on what stage regions were at.

DairyNZ wanted to work with councils and stakeholders to get the best outcome, which was about finding solutions that were ''real for everyone''.

There was a big push in that space, with science, to work out what needed to be fixed and what was the best way to go about it, ''so everyone wins'', he said.

Volatility had increased in the past few years and that was good news for New Zealand's dairy industry.

''Volatility favours the resilient. That is what our farmers in New Zealand have always been good at.''

Producers overseas would take it harder but, as they became more resilient, then that challenged the New Zealand industry, which needed to stay competitive ''to win and thrive''.

Being competitive was arguably more important than ever in the industry.

Farmers, over the next few years, would be looking to reduce their footprint, while increasing profit.

Dairying was not the traditional industry in New Zealand and dairy farmers had to be adaptive and had to work together over many years, Dr Mackle said.

There had been a lot of change over the past 10 years and something to watch over the next five to 10 years was how the industry would play out in terms of its structure and also that ''collective spirit'' that had been the basis for its rapid adoption over many years, he said.

Dr Mackle expected the next 10 years to be ''fascinating'' and there were plenty of challenges to keep him happy in his role.