Enhancing the ecology a priority for generations of Kilmog farming family 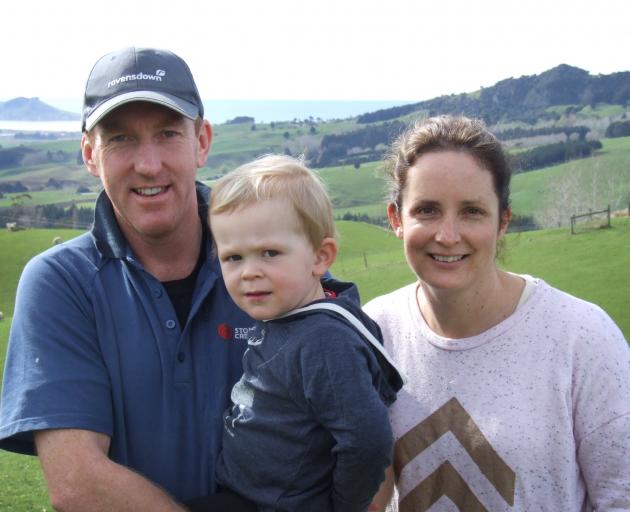 Nick and Steph Scott with William (2) on their farm on the Kilmog, south of Waikouaiti. PHOTO: SALLY RAE
Generations of the Scott family, from Waikouaiti, have invested heavily in preserving and enhancing the ecology of their land.

But as Nick and Steph Scott see it, they are no different from most farmers in New Zealand.

‘‘We run a land-based business that needs to generate an economic return but, at the same time, we are aware of our environmental responsibilities and have a genuine attachment to the land that, in my view, is far greater than that of many of our urban counterparts,’’ Mr Scott said.

They were fifth generation on the property, having purchased what was originally Mr Scott’s family farm in 2006, and later adding an adjoining property.

From Auckland, Mrs Scott is a landscape architect who met her future husband while studying at Lincoln. The couple have three children — Charlotte (7), George (5) and William (2).

The couple run about 4000 sheep and, depending on the season, between 400 and 600 cattle, mainly trading beef animals with some dairy grazing.

The property’s topography varied from relatively steep paddocks to intensive flats, although the bulk of the land was easy rolling.

Nick Scott beside a creek which has been fenced and riparian planted. PHOTO: SALLY RAE
The main challenge was the variable climate; it was exposed to summer dry, although usually a fairly favourable winter, which suited their business.

Over the years, the Scott family had invested a significant amount of capital and time into preserving and enhancing the sustainability of their land.

Any water runoff flowed north, eventually feeding into the Waikouaiti River Karitane Estuary, with just over 4km from the last point at which water left the farm to the river itself.

Two significant creeks run through the farm, both important tributaries to the Waikouaiti River and Karitane Estuary.

The Kilmog Creek was completely fenced from where it entered the farm to where it exited. That was completed by Mr Scott’s father Ian in 1989.

Native areas within the fencing had regenerated with livestock access completely restricted. The water ran clear and clean and the erosion-prone gorge had stabilised, Mr Scott said.

The second significant creek travelled for 1.5km through intensive flat paddocks. The family undertook a three-stage project, starting in 2012, fencing the creek on both sides and riparian planting about 4m-5m on either side in native species.

Members of the Karitane Estuary Care Group were involved with the first stage of the project.

The final stage was completed only recently and the creek was now fenced and planted from boundary to boundary.

A total of 6000 natives had been planted within that area and two bridges had been built, enabling sheep and cattle to cross the creek without disturbance.

Those projects had been voluntarily completed to protect the streams, given the property’s intensive stocking rates and farming systems.

The creek before fencing and planting. PHOTO: SUPPLIED
But Mr Scott emphasised such measures were not practical and, in his view, not necessary, on more extensive hill country operations.

In 2007, the Scotts identified 6.5ha of native bush as another area they wanted to preserve. They fenced it off and formally placed it under QEII covenant.

While the motivation was to preserve the area for future generations, it had a ‘‘twofold’’ effect, making the area easier to farm.

With livestock restricted, mustering was much easier, and the bush had also improved without grazing.

Over a 40-year period, 14 separate areas on the farm had been identified as being slip-prone. During that time, they had been fenced off and planted in trees.

Those areas collectively totalled 40ha and were now a mixture of natives, pinus radiata, macrocarpa and blue gum.

About 10km of fencing was required to subdivide off those areas, and more than 50,000 trees have been planted.

Mr and Mrs Scott recently developed a small wetland area, physically enlarging the area and fencing it off from livestock.

They planted the banks in a combination of native and exotic plants that were both aesthetically pleasing and would encourage waterfowl activity in the area. They had a hut at the wetland, which was a great place to spend time with the family.

Mr Scott said their efforts were ‘‘not just a kneejerk reaction’’ to recent publicity around environmental issues — ‘‘this has been going on for generations’’ — and he particularly acknowledged the work done by his parents.

The majority of the farming community had been proactively taking measures to lessen their impact on the environment, not just over the past few years but for many decades.

There were many extreme views and figures being portrayed that were ‘‘not actually fact’’.

‘‘The majority of farmers do not have their ‘head buried in the sand’ and are in fact working proactively to improve aspects of their farms,’’ Mr Scott said.

Everyone needed to look at where improvements could be made to lessen their ecological footprint.

However, recent ‘‘propaganda’’ around farming and the subsequent ‘‘blame game’’ in regards to water quality needed to be looked at in balance.

Applying new taxes to farms would have the opposite effect to what was desired; it would force further intensification and reduce funds available to be spent on conservation measures.

As well as the environmental benefits, their plantings were also ‘‘aesthetically awesome’’ and provided shelter for livestock, particularly beneficial at lambing time.

Mr and Mrs Scott have invited representatives of the Department of Conservation, the Otago Regional Council, Fish & Game and the Karitane Estuary Care group on to their property.

Spending time with such groups, whether planting trees or electric fishing a creek, meant good dialogue and ‘‘probably gives us more understanding of them and vice versa’’, Mr Scott said.

He encouraged people to get such groups involved, while Mrs Scott suggested giving urban people more opportunities to help with planting.

Mr Scott’s biggest concern at the moment was not commodity prices; it was the potential issues and pressures farmers faced with environmental restrictions and challenges, health and safety, animal welfare and synthetic meat.

‘‘We’re just going to have to be clever and hopefully we’ve got the people in the right places to push our case.’’

While there had been some tough times in the red meat sector, the couple believed the fundamentals were there for demand for protein.

The only certainty in the sector was volatility and some diversification was probably key to managing that.

‘‘We don’t just farm for fun. We’re in it for an economic return or it’s not viable. It’s a business. I don’t think urban people realise it’s a multimillion-dollar business,’’ he said.