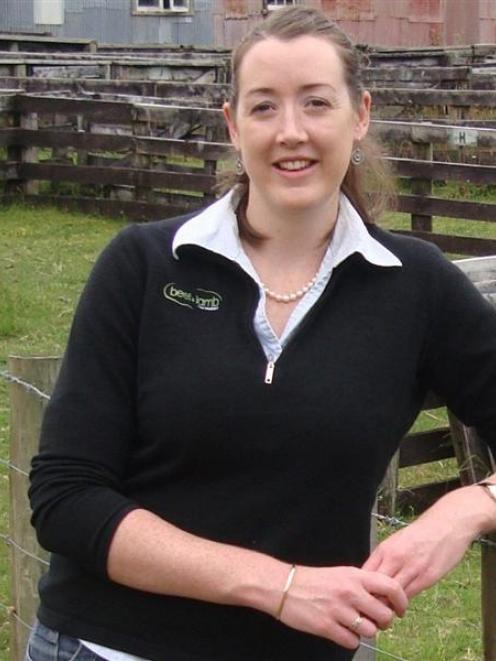 Erica van Reenen is passionate about both agriculture and the environment. Photo supplied.
When Beef and Lamb New Zealand decided to create a new environmental extension manager position, it was an ideal job for Erica van Reenen.

The role combined two of Ms van Reenen's passions - agriculture and the environment.

It was established earlier this year to support farmers wanting to achieve environmental best practice on-farm, while maintaining profitable businesses.

Ms van Reenen (29), who grew up in Wanaka, has had a long-standing love of farming, which was coupled with an equal passion for conservation and the environment.

After leaving secondary school, she headed to Massey University to study veterinary science.

She had wanted to be a vet all her life and had never considered any other option, she recalled during a recent visit to Otago for a Trees on Farms workshop at Dunback.

But after just three weeks, she decided to change to a science degree, in agricultural science, having come to the realisation she did not want to be a vet.

She realised her passion was agriculture and, in hindsight, she was very proud she made the decision to switch, saying she was now doing what she really loved.

For both her masters degree - which was in merino wool production - and undergraduate studies, she did as many ecology and conservation papers as she could.

After completing her studies, Ms van Reenen was keen to get into policy, working in an area where she could make a difference for high country farmers.

At that time, Maf (now the Ministry for Primary Industries) was doing a big recruitment drive and she secured a job working in climate change.

She spent three and a-half years working on the emissions trading scheme for agriculture.

''It was a fascinating first step into the real world. I learnt pretty quickly how to deal with very angry farmers,'' she recalled.

It also gave her a ''massive insight'' into how the Government worked. When she first started, there was a Labour government and then National won the election.

It was a case of being ''very much thrown straight into it headfirst'', dealing with industry stakeholders and redesigning it, and switching from one minister,

Jim Anderton, to another, David Carter.

Climate change was a big issue and it was going to affect New Zealand. There was an opportunity for the country to add value to what it produced.

''I still firmly believe New Zealand needs to do its part for climate change,'' she said.

Then came a ''cool opportunity'' to be involved with the new rental system for Crown pastoral leases, and she achieved her goal of being involved in high country policy.

Ms van Reenen then moved from Wellington to the Waikato and moved into the sector performance team for six months, working on a range of things including Sustainable Farming Fund, and Primary Growth Partnership projects.

Then came a phone call from Beef and Lamb New Zealand, asking if she would be interested in an extension manager's role.

By that stage, she had ''done the science thing and the policy thing'' and she realised needed another step around extension ''to actually get farmers to do something different''. Doing something different could be doing the same thing, but being informed about it, she said.

With a desire to work more closely with farmers, she leapt at the opportunity and took on the role of extension manager for mid-Northern in 2011.

She had previously worked with Beef and Lamb in Wellington, but ''across the table''.

The extension managers were all encouraged to work on where their skills were and that meant she could ''get in a few more environmental things''.

But still, it was not quite enough - ''the environment thing just wouldn't go away'' - and she was lucky that Beef and Lamb decided to create a new environmental extension manager role.

While it was a national role, she was still working with the same team, while specialising in the two areas that she loved.

It has been a busy time for Ms van Reenen since she started the role on March 1, setting up new programmes, getting land and environment plans on track, supporting extension managers and talking to as many stakeholders as possible.

Describing herself as quite an aspirational person, she preferred to talk about ''best practice'' rather than ''good practice'' as she would always rather be trying to do better.

She completed the Kellogg Rural Leaders programme in 2012 and a lot of what was driving her was the result of research she did while on that course, on increasing environmental practices on sheep and beef farms.

Ms van Reenen, who now lives with her partner on a sheep and beef farm in Rangitikei, has been heavily involved in Young Farmers.

It was an exciting organisation to be part of and she had some ''pretty amazing'' opportunities because of her involvement.

While in Wellington, she was chairwoman of Wellington Young Farmers and she came up with the idea of having an industry cocktail function.

Chairmen, chief executives and other key people involved in industry bodies were invited, along with the chairmen of the Young Farmers clubs in Manawatu, which was from Wanganui south, and also Wairarapa, while all the Wellington club members were also there.

David Carter, then Primary Industries Minister, attended and it was exciting to have links form both ways.

''It opened several doors for most people that were involved,'' she said.

That had gone from strength to strength and 50 people attended a recent meeting, she said.

Ms van Reenen has also been involved in the Young Farmers Contest. She convened the 2010 regional final, was on committees for the next three, and then convened last year's Waikato-Bay of Plenty regional final in Hamilton.

In this year's contest, it was her last week in Hamilton when the district final was being held and she decided it would be a good thing to do on her last weekend.

She got second which qualified her for the Waikato-Bay of Plenty regional final.

She decided she ''might as well give it everything'' and enlisted help from ''a whole bunch of people'' in the community, which was a great way to meet new people and pick up new skills. Mr Van de Molen also gave her a coaching weekend.

While she wanted to win the regional final, Ms van Reenen said she was realistic about the competition she faced, and she thought a top four placing would be ''pretty cool''.

She finished second to sheep and beef farmer Dwayne Cowin who was competing in his fourth regional final.

Now she had ''the bug'', she was keen to have another crack at the competition, although she would be representing a different region.

In the weekends, Ms van Reenen enjoyed helping out on the farm, which also gave her a good grounding.

Her partner was very passionate about the industry, his family were all very good farmers and there were some ''fantastic'' conversations around the dinner table, she said.

With her new role, it was also ''pretty valuable'' to have their insight.