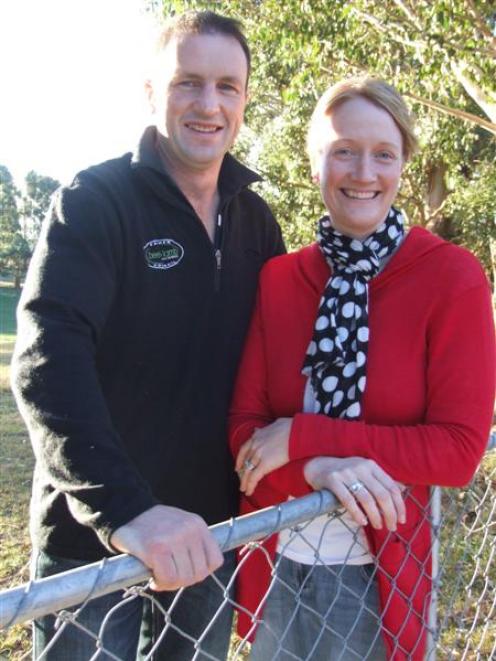 The North Otago couple were awarded the Gordon Stephenson Trophy during a function at Parliament Buildings that celebrated people farming in a manner that was environmentally, economically and socially sustainable.

The couple entered to find out more about the awards and to identify where the major gaps were in their business.

Initially they thought it did not suit to enter this year and they thought they would try next year, but then realised they were never going to get everything done that they wanted before entering and they would "give it a go".

The process was not arduous and the couple reckoned that judging would be a lot more difficult than entering.

It did not worry them having people on their farm, viewing and finding out about their operation, as it provided feedback and opinions on what the judges - specialist people in the industry - thought, they said.

They were "chuffed" to firstly be named the supreme winners in the Otago awards, which were announced in Dunedin in April.

It was a very positive evening, Mrs Smith said.

When they headed to Wellington for the national awards, they thought it would be "great to meet the other entrants, have a good time and we'll come back home", Mr Smith said.

There was a 30-minute "full-on" interview, followed by presentations the following day by all nine regional finalists.

The couple enjoyed meeting the other finalists who were doing some "amazing" things on their properties, Mrs Smith said.

They had made their assessments about who would win the national title and, when Primary Industries Minister David Carter read their name out, they were stunned.

Mr Smith said he and his wife were a "rounded team" and had different views on lots of things.

Life was busy for the couple, who have three young children - Charlotte (5), Henry (3) and George (8 months) - but it was a matter of trying to balance everything.

At that time, she was in Gore and a senior field officer for Ravensdown Fertiliser, the only female firefighter in the Gore Fire Brigade and organised the Starlight Ball at Lochiel as a fundraiser for the Child Cancer Foundation.

Mr Smith grew up on a sheep farm in Southland and then spent 10 years in the rural transport industry.

He always wanted to go farming.

In 2008, the opportunity arose for Mr and Mrs Smith to move to North Otago and join Mrs Smith's family's farming operation.

Mrs Smith never imagined her children would go to the same school she did and it was rather special.

Five Forks was a great community to be part of, as Southland had been.

Mr Smith is on the Beef and Lamb New Zealand Central South Island Farmer Council and coaches the Valley premier rugby team and is also involved with the Perendale Sheep Society.

She tended to do the farm's administration work at night and would be able to do more practical farm work once the children got older.

Their journey was "just beginning" and there were a lot of other things they wanted to do in terms of development, some consolidation and continuing to widen their involvement with the industry, she said.

The couple were very conscious that, especially in the next 12 months, they had an ambassadorial role and they wanted to make sure they could represent all industries well.

They were advocates of "the three P's" - passion, pride and productivity.

They had passion not just for what they did but for the whole agricultural industry, pride in what they did on the farm, while they still had to be productive.

The Ballance awards fitted in well with their ethos, as it was all about sustainable productivity, Mrs Smith said.

Last year's national winners, Grant and Bernie Weller, of Southland, undertook a visit to Europe where they met industry representatives in key markets and had the opportunity to talk about their farming practices.

Beef and Lamb New Zealand would be working with Mr and Mrs Smith in the months ahead to ensure their "great story" of farming in an environmentally, economically and socially sustainable way was heard both within and beyond the sector, chief executive Dr Scott Champion said.