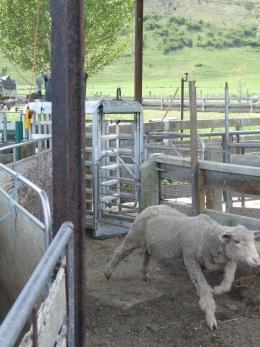 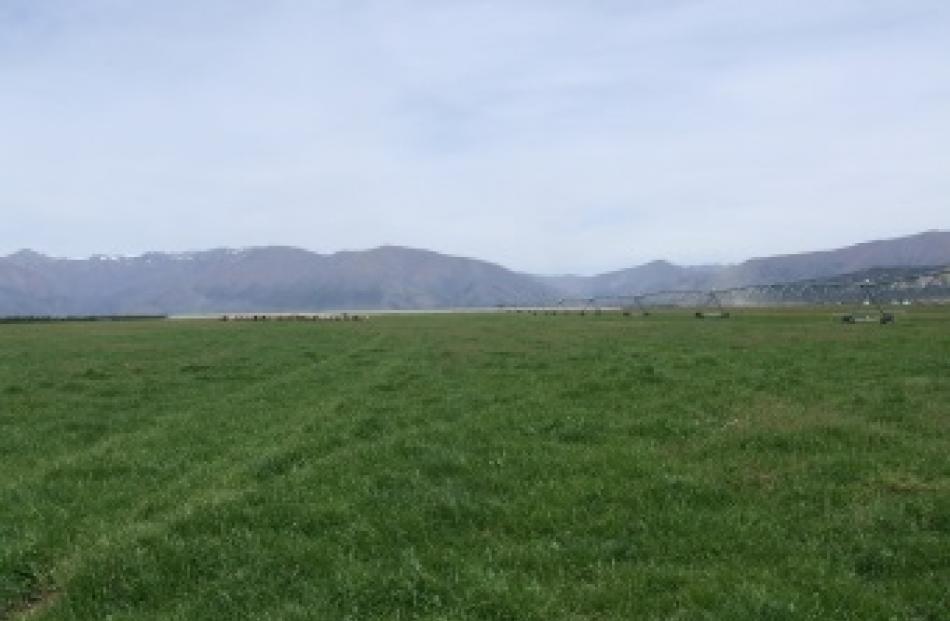 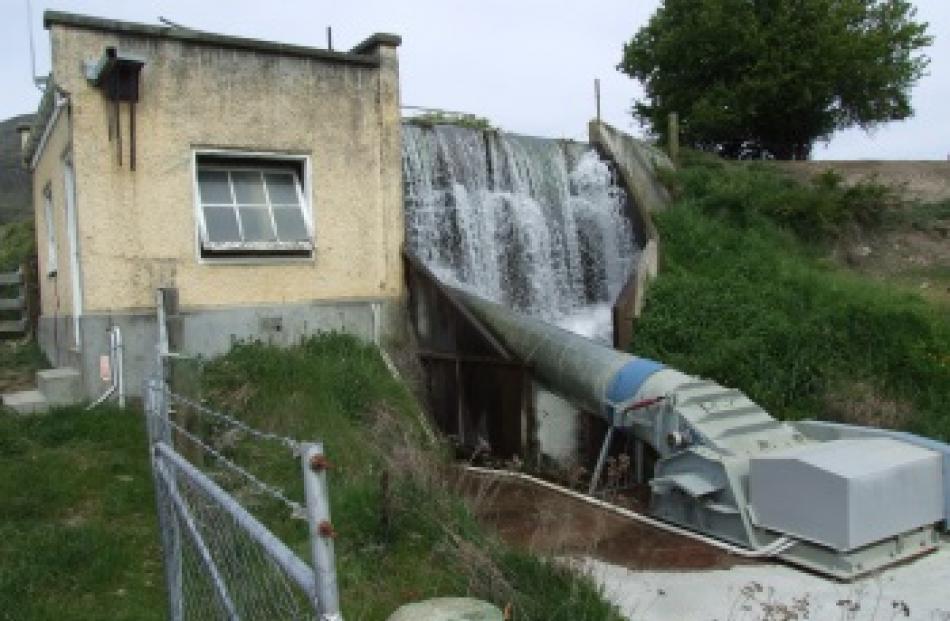 The hydroelectricity plant at Omarama Station. 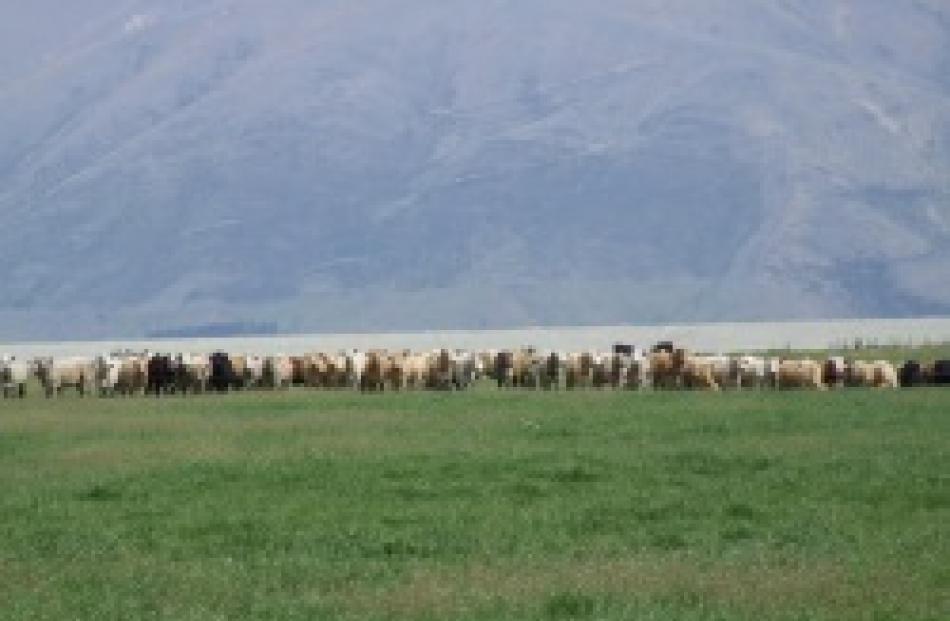 That's the simple message from Richard Subtil, who is unashamedly proud to be a sheep and beef farmer.

Mr Subtil and his wife Annabelle, who farm Omarama Station, were the supreme winners in this year's Canterbury Ballance farm environment awards.

A field day was held recently at their 12,000ha Upper Waitaki property, which has been in Mrs Subtil's family since 1919.

The impressive operation includes merino sheep and beef cattle, an extensive irrigation development, a hydroelectricity plant and a homestay.

James Hoban, one of the judges for the awards, described it as a ''very hard business to fault''. On the economic side, the Subtils were industry-leading, profitable high country farmers.

Environmentally, they were ''farming in a goldfish bowl'', alongside a main highway in a sensitive environment, and they had to be open and transparent about what they were doing.

On the people side of the business, the relationships they had built meant they had a strong team around them.

''You have to be an all-rounder to win this award. We were really proud to have them as the Canterbury winners,'' Mr Hoban said.

Mr Subtil said a key factor at Omarama Station was to focus on the future - ''way in the distance'', rather than the short term in front of them, and invest in that future. About $6million has been spent on centre-pivot irrigation and 560ha of flats is now irrigated by eight pivots.

Pivot irrigation has transformed the flats at Omarama Station.

Even during judging of the farm environment awards, the couple were questioned how they could finance such investment and how they made it work.

''People just don't see this level of investment can work when you're sheep and beef farmers,'' Mr Subtil said.

As a proud sheep and beef farmer, he was frustrated by that ''negative attitude''. Farmers in general had talked themselves into the idea they could not make money, so they did not invest in their operations.

The couple were passionate about doing a job well, one their children - daughter Emma and son Henry - could be proud of in the future, while also being profitable.

About 70,000kg of 17 to 19 micron wool was primarily sold on contract to Icebreaker and John Smedley, while all beef production went ANZCO Foods' Aleph programme, destined for a Japanese restaurant chain.

The couple were extremely fortunate that Mrs Subtil's late father, Dick Wardell, invested in the future and gave them ''the springboard to go forward'', Mr Subtil said.

Tenure review was recently completed and the Subtils' secured freehold of all but 120ha, which is now a scientific reserve for the protection of native eels.

For 11 years, the Subtils have worked with local iwi and the Department of Conservation to promote the regeneration of the native longfin eel population.

John Wilkie, of the eel recovery programme, said eels were probably one of the best environmental monitors, aside from water monitoring.

Analysing an eel could reveal what happened over the time since it entered the river right through its life cycle. If your eels were thriving, you had good water, he said.

A QEII National Trust covenant has been placed over 2500ha, including a high country bog wetland containing rare native species.

Omarama Station runs about 19,500 merino sheep and 1000 beef cattle. In preparation for the impending El Nino weather pattern, about 2500 stock units had already been dropped.

When the water takes from the Ahuriri River were restricted, they went from full allocation to being completely shut down.

There had been times when they had up to seven weeks without water and, given the substantial pivot investment, that was ''pretty painful'', Mr Subtil said.

About 18 months ago, they started the water storage pond process, which provided enough water - at 50% reduction - to last at least a month. The pond cost about $800,000.

''This is just our insurance policy to maximise the potential of the pivots we've got established,'' he said.

There were commercial possibilities they would consider over time. By making the investment, they should be able to safeguard their water.

On the flats, before irrigation, carrying capacity was about quarter of a stock unit per hectare a year. Border dyke irrigation pushed that up to 14 stock units and now, under pivot, it was 24. They were now moving into dryland development.

Dr Jim Moir, of Lincoln University, has been looking at soil and plant challenges on the property, as soil acidity is a big problem in the high country.

Aluminium toxicity, a problem all over the world, was a big problem because it affected clover most. Often, applying lime was difficult, as farmers could not afford it, Dr Moir said.

He was trying to find a less expensive solution so toxicity could be reduced - particularly getting legumes to grow.

Legumes were there to pump nitrogen into the soil and provide high-quality feed. The problem was that most legumes were sensitive to aluminium.

His work included finding hardier varieties. Of all the legumes, lucerne was the most sensitive to aluminium.

A ripper has been developed over the past several years to deliver lime deeper into the soil, as it could take years otherwise to travel through the soil and change the pH, he said.

Some field trials were being set up, including at Omarama Station, where Russell lupins, lucerne, ryecorn and festulolium were being planted.

The Subtils' were early adopters of animal EID (electronic identification) and had worked with industry organisations to refine the use of that technology.

Estimated breeding values (EBVs) were not magic but they did help work out where the genes were to make a more profitable operation, while EID brought genetic gains to the ewe flock and made managing the flock easier.

At Omarama Station, it was not all about micron, as they were also targeting meat production. They made the decision to focus on supplying wool for Icebreaker contracts, at about 18.9 micron, but had really focused on reproduction and getting good growth.

It was quite a carcass-driven breeding objective. Some top genetics were starting to flow into their production system, Dr Ferguson said.

It was not all just about figures - they looked at the structure, making sure the animal would thrive in the Omarama environment.

They needed well-developed lambs at weaning time that went on to be good keepers or culls. In tandem with that was creating a good feedbank so there was plenty to feed multiples.

He was frustrated there was no good data-management programme that could work in with other programmes to build up a whole raft of information, including the likes of water, chemicals, fertiliser and scanning percentages. He was looking forward to that being developed.

An interesting feature of Omarama Station is the hydroelectricity plant. Mrs Subtil's grandfather Wilfred and great-uncle Cecil Wardell paid 1000 in the 1930s to build the original structure. Mains electricity did not arrive in the area until 1954.

The original turbine, which was made in the United Kingdom in 1890 and served in Manapouri, was ''already well second-hand''.

A new turbine and penstock (sluice) was installed a few years ago. The biggest issue in previous years had been balancing supply and demand. Plugging into the national grid to sell excess power made financial sense and it was a ''pretty good feeling to be self-sufficient'', Mr Subtil said.

When it came to farming, there was a ''whole new world of compliance'' coming in. It was going to be the same, wherever farmers were farming in New Zealand, and they needed to ''get ahead of the game'' and become experts on their own property.

''I really encourage people to get involved, understand what's going on and build your own bank of data and know how you're going,'' he said.

Taupo farmer Mike Barton, who farms under a nitrogen cap, implored those attending to ''engage with the process''.

The reality was that farming had an impact on the environment, although the response from farming leaders tended to be deny that, he said.

He and his wife Sharon had now been three years farming under a nitrogen cap, selling their beef under the Taupo Beef brand.

The business had grown to include five other farmers and had been extended to lamb. Initially, they were only selling in the central plateau area but were now selling into Wellington and Auckland, and hoped to eventually sell to an export market.

Mr Barton no longer called himself a farmer - instead he referred to himself as a food producer who cared about the environment. Eating was the final step in the agricultural process, he said.

Environment Canterbury water and land programme director Christina Robb said the regional council was working with farmers to grow the economy, make it more resilient and look after the environment.

There was pressure for water quality to improve and everyone was learning.

ECan was trying hard to make it as easy as it could.

Her advice to farmers was to find out about what good management practice was for their sector and to start thinking about farm environment plans.

The Subtils were role models and there were lots of lessons from the field day. For her, it was particularly around what could be done in a sensitive environment.

''It's really gratifying to see the way you're farming in this environment, demonstrating to me you can do anything if you apply yourself to it,'' Dame Margaret said.

Mr Subtil was a strong advocate for the Ballance farm environment awards system, saying it had been an extremely beneficial process for them to go through as a team. It made them ''sit down and think about stuff'', while judges' feedback had been very good.