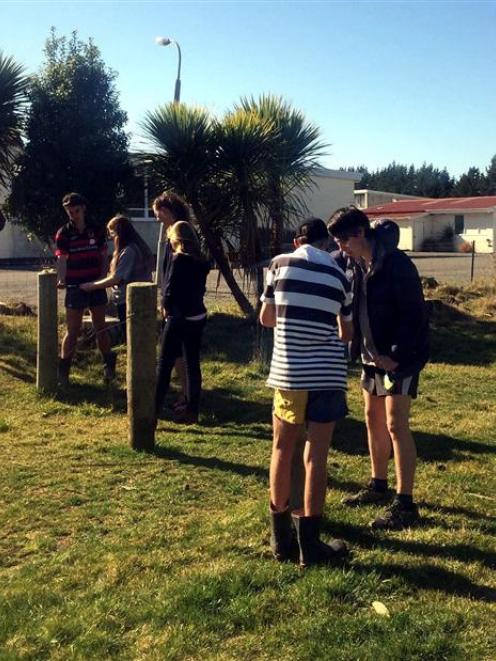 School pupils did a lot of prior planning to make the day a success. It was a big learning curve for us and the school. The day started with a dog trialling demonstration by Barry Hobbs, assisted by Allan Thompson.

The visitors watched with interest as his well trained dogs got the sheep into the pen. Next it was off to be put into random groups for modules. Barrie Rae, an enthusiastic Poll Dorset breeder taught them stock judging, helped by Jack Price.

After the modules we had a well earned lunch break. Thanks to Jacob Sullivan and Mrs Sanderson for tending the barbecue.

After lunch we did games, including gumboot tossing, sack races and problem solving, and we were pleased to beat St Kevin's at tug-o-war.

A good day was had by all. Thanks to Biddy Huddlestone from Young Farmers, Lance Ruehorn, for his photography, and Will Smith for handing out spot prizes.

Also to the farm committee, particularly Mr Fox, Mr Isbister, and Mr Ruddenklau. Thank you also to Waterforce and Farmlands.

Also thanks to Miss Prentice for letting we boys run the day. I would also like to thank all the boys who helped out. We will hold more days like this in the future.

James Kinsman is a Year 12 pupil at Waitaki Boys'.