Finalist liked 'getting stuck in' 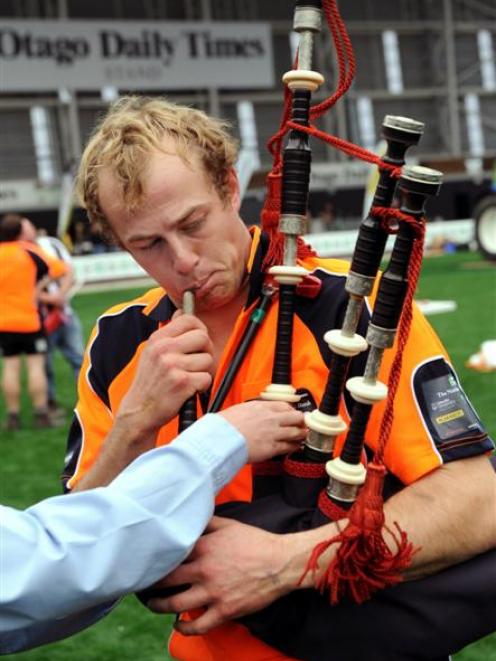 It was back to work as usual for the Gore sheep, beef and arable farmer after a gruelling few days in Dunedin at the grand final of the National Bank Young Farmer Contest.

Finishing runner-up was not new for Mr Gardyne, as he was runner-up to Grant McNaughton in 2010, but he was philosophical about defeat.

While he obviously "wanted to go one better", the contest had been great fun and Mr Lilley deserved to win, Mr Gardyne said.

"In that [final] buzzer round, I don't think I could have studied to beat him," he said.

With a day job as a farmer, it was not surprising Mr Gardyne did so well in the practical aspects of the competition.

He enjoyed "getting stuck in and getting the hands dirty".

He found the toughest parts of the contest were the Saturday evening session and the business plan part of the technical day.

As for the best? Shearing sheep during a head-to-head challenge on the practical day at Forsyth Barr Stadium was "great fun".

"I loved that. I just wished the whole day had been shearing sheep."

Contestants had to bid for different lengths of time to shear three sheep.

Mr Gardyne bid on the least amount of time but still finished first.

The seven contestants had a "great time together" and he was full of praise for Northland's representative Katherine Tucker, only the third female grand finalist in the contest's history.

One of the things that mitigated not winning was the fact the finalists had such a good time together, he said.

As a full-time farmer, managing a 647ha property, Mr Gardyne only took one week off work before the grand final to study.

Before that, study took place before work in the morning and at the end of the day.

"I'm a farmer and the contest is something I do on the side.

He had "great support" from Otago-Southland and he had been very fortunate that both grand finals he had been in had been held in his home region.

On the Saturday night, he could hear people cheering him on which was "really cool".

Mr Gardyne was grateful for the support of his wife, Esther, saying he had not been very useful around the house for several months.

"I'm going to have to start pulling my weight."

Having now competed in two grand finals, Mr Gardyne was ineligible to enter the contest again.

However, he intended to continue to be involved in the organisation of the event.

From a contestant's point of view, he said he had grown his skills so much, including public speaking, which had never previously been a strong point.

This year he won the speech competition at the grand final.

From an organisational perspective, there was a great group to work with and they had a great time, he said.

He is also involved with his local church where he takes on various roles and helps with events.

He has completed the bronze, silver and gold Duke of Edinburgh awards.

Asked how he fitted everything in, Mr Gardyne said "sometimes you just don't sleep much".

"I don't spend a lot of time watching TV.

"I think everyone's got 24 hours in the day.

He enjoyed working with others and he was thrilled to see the recent upturn in Young Farmers, which was "really going places".

Otago-Southland was the second-largest region and the aim was to become the biggest.

Mr Gardyne's younger brothers have featured in the national TeenAg finals and he did not rule out the Gardyne name appearing again in the Young Farmer Contest grand final.

The Goldpine NZYF national fencing competition was held at AgResearch Invermay during the technical day of the contest, with seven teams competing.

Angus Brown and Daniel Plowman from East Coast's Ballance Club won the top spot and received $1000 in goods and cash from Goldpine.

Otago-Southland's Brad McNamara and Lyndon Wallace were second and James Rodgers and Nigel Will (Taranaki-Manawatu) were third.

It was a good weekend for Robert who, with Richard Gardyne, was second in the TeenAg grand final.