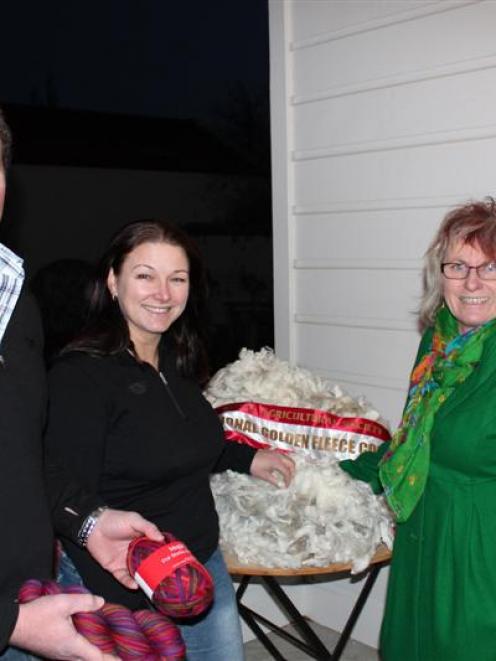 Andrew and Tracy Paterson, from Matakanui Station, with Marnie Kelly from Touch Yarns, and one of the Patersons' show fleeces, at the opening of Mrs Kelly's new shop in Clyde. The multicoloured yarn Mr Paterson is holding is a sock yarn called Matakanui. Photo supplied.
Ask Marnie Kelly what she likes about Matakanui Station's fine-wool fleeces and the answer is simple - ''they're absolutely fabulous, actually''.

Mrs Kelly is the general manager of Central Otago-based Touch Yarns, which produces mostly hand-dyed wool yarns which are exported to Europe and the United States, as well as sold in shops throughout New Zealand and Australia, online and through a retail shop in Clyde.

She has had a long association with the Paterson family at Matakanui Station, near Omakau, dating back to when she was breeding her own coloured sheep and bought rams as an outcross.

For some years, she has been buying their show fleeces, a relationship she highly values.

''We couldn't make the quality of yarn we make if we didn't have that quality of fleece to put in. The end result is only what you put into it,'' she said.

There were 120 fleeces entered across the fine wool and strong wool categories, and the event was hosted by the Otago-Taieri A&P Society. The society will also host the competition next year before it moves to Oxford in 2015.

While Matakanui Station has featured prominently in fleece competitions - including winning the supreme champion fleece at the Canterbury A&P Show seven times in the past nine years - it had been 28 years since it last won the Golden Fleece title. Matakanui also won in 1983.

Mr Paterson was particularly pleased it was a ewe fleece, saying it highlighted the station's breeding programme, selection of sheep with attributes that were suitable for the property's tough climatic conditions, and animal health programme was paying off.

''Sometimes a ewe comes under pressure around lambing time, which is usually our coldest time and most unpredictable weather, which can cause sheep to have a break in their wool. In this ewe's case, she handled those pressures well,'' he said.

All of the Matakanui show and display fleeces were destined for Touch Yarns, which has recently moved into a new retail outlet in Sunderland St, Clyde, in a 80-year-old villa.

Mrs Kelly was excited about the move, particularly having the main street presence, while Mr Paterson and his wife, Tracy, were supportive of what she had done to ''keep things local''.

Innovation was necessary in such a business - ''there's so much competition out there'' - which was why the company used the highest-quality wool it could get, which was sourced locally, Mrs Kelly said.

That was important for their customers, who wanted to buy a New Zealand product. And their point of difference was that their wool came from the local area and they manufactured the yarn and dyed it, she said.

The Patersons used fleece competitions as a promotional tool to show their wool ''to a lot of people'', Mr Paterson said.

They sent many fleeces to the prominent fine wool A and P shows, particularly the Canterbury, Upper Clutha, Mackenzie and Central Otago shows, as well as the national Golden Fleece. He described the fleece that won the Golden Fleece as ''a very nice fleece''.

Matakanui's ewes were ''looking really good'' and he was expecting some more good fleeces for the next show season.