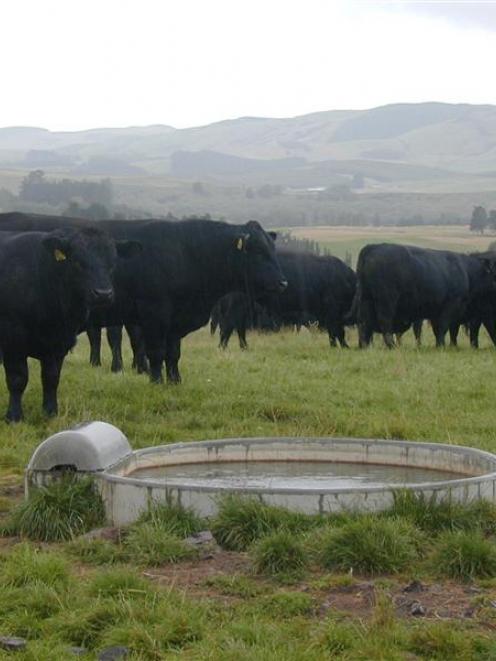 Angus cattle will be the first animals to have SNP Chip gene technology late this year to improve selection for traits. Photo by Neal Wallace.
A new genetic product, or SNP Chip, aimed at assisting sheep breeders and Angus beef breeders with molecular breeding values, has been launched in the United States and will be available in New Zealand later this year.

The products are being commercialised by Pfizer Animal Health.

Sharl Liebergreen, the company's technical service regional manager, said the technology was leveraged off the bovine genome sequencing, which allowed geneticists initially to use 50,000 DNA markers at once but would soon grow to 500,000 markers.

By comparison, the dairy industry was using 500,000 gene markers.

Mr Liebergreen told a Silver Fern Farms sheep and beef forum in Gore that, by themselves, most of those markers had small effects.

Cumulatively, those effects were large and influential, allowing selection of animals for diverse values, such as carcass weight, numbers of offspring born, survival or beef tenderness.

The information for beef cattle has been extended to include previously difficult-to-measure values such as average daily weight gain, dry matter intake and net feed intake.

Mr Liebergreen said the first gene tool was for Angus because Australian and United States breeders had a massive amount of phenotype information, but similar tools would soon be available for other breeds as data was accumulated.

In sheep it was available for the main maternal sheep breeds - Romney, Coopworth and Perendale - and would enhance information on hard-to-measure traits of number of lambs born and faecal egg counts, while enhancing information in weaning and carcass weights.

A measure for lamb survival was not far away, he said.

Mr Liebergreen said it was made possible because of sequencing of the sheep and bovine DNAs and scientific collaboration between Sheep Improvement Ltd, Meat and Wool New Zealand, Ovita and AgResearch.

Pfizer has bought Catapult from Ovita and has first refusal on any sheep genomics technology developed by Ovita, jointly owned by AgResearch and Agritech Investments Ltd, an investment arm of Meat and Wool New Zealand.

"This wouldn't have occurred without sheep and beef levies being paid to Meat and Wool New Zealand," he said.

Mr Liebergreen said Pfizer not only paid royalties to Ovita for the technology, but also contributed $500,000 a year to Ovita for research.

He described SNP Chips as a steep change in the quality of information made available to breeders and their clients, comparable to Sheep Improvement Ltd and the Central Progeny Test, but he warned the speed of new technology was proving a challenge, not only to scientists, but also farmers.

It would continue at this pace, he said, because scientists now had access to the bovine and sheep genome sequencing.

AgResearch's manager of applied biotechnologies, Jimmy Suttie, told the seminar New Zealand could no longer trade on being the world's lowest-cost food producer, but had to play to its advantages and use new technology to provide food markets wanted.

"New Zealand's point of difference is how we develop and adapt technology," he said.

Farmers needed to adapt several technologies to achieve that, he said.

But New Zealand farmers had to achieve those gains from a declining pastoral area and reverse a trend of increasing the number of stock units per hectare, which he warned could not continue indefinitely.

Dr Suttie gave an insight into some of those new technologies, including fungal endophytes that live in grass and confer pest resistance, but without neurotoxic disease in animals.

This could boost milk production 10% to 15% and liveweight gains 10%, providing a financial benefit of $225 a hectare.