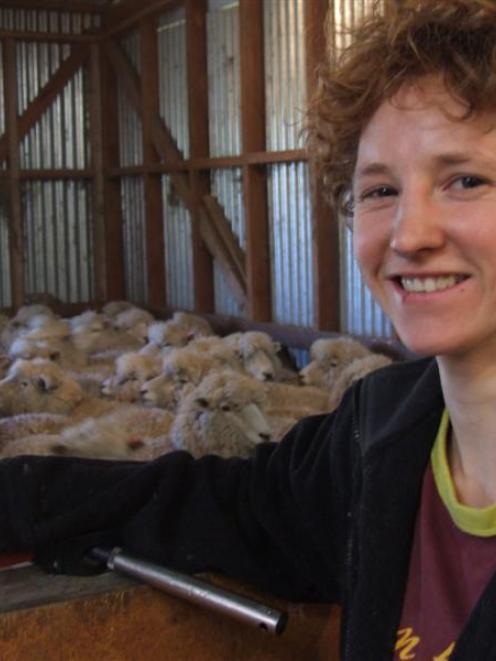 Cordula Ihring takes a break from shearing at a North Otago farm recently. Photo by Sally Rae.
Cordula Ihring is one determined woman.

The qualified German vet has traded a stethoscope for a shearing hand-piece as she works for a Kurow-based shearing gang.

During the morning smoko break at Peter and Pauline Dodd's Tapui farm, in North Otago, recently, Ms Ihring (28), known as Cordy, spoke of her passion for shearing.

''I love it,'' the slightly-built woman enthused.

While not from a farming background, she was born in a small town of about 2000 residents in Germany and was keen on animals from a young age.

Her first taste of the shearing industry came when she got a job wool-handling in Australia. While wool-handling was not her thing, she became interested in shearing.

The sheep industry in Germany was very different from New Zealand, with a lot of hobby farmers with small numbers of sheep. There were no shearing sheds - ''you shear anywhere you can'', she said.

After qualifying as a vet, she decided she wanted to improve her shearing skills and Australia and New Zealand were the best countries in the world to do that, she said.

Shearing provided a way for her to combine work and travel and she had ''so much fun'' doing that. She also had completed shearing courses in both Australia and New Zealand, which had been very worthwhile.

After stints in Taumarunui and Dipton, Ms Ihring was now working for Dave Gard's shearing gang. She intended staying on for pre-lamb shearing. She is eight months into a year-long trip to New Zealand.

While there were ''quite a few'' New Zealand women shearing, it was very unusual to encounter foreign female shearers, Mr Gard said.

It was not all about brute strength; rather, it was how a shearer had been taught and their technique. Like anything, ''the more you do it, the better you get at it'', he said.

Ms Ihring fitted in well with the team and having an international flavour also helped boost morale.