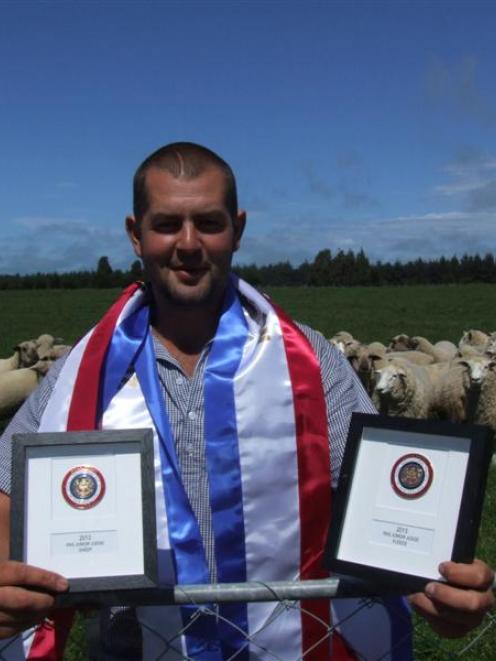 Ross McCulloch with the gold medals he won at the recent Hawkes Bay A&P Show. Photo by Sally Rae.
Young Glenavy sheep farmer Ross McCulloch has proved he has an eye for stock.

Mr McCulloch (24) won Royal Agricultural Society of New Zealand gold medals in both the sheep and wool sections at the recent Hawkes Bay A&P Show in Hastings, securing him a trip to Australia next year.

He will compete in a stock-judging competition at the Royal Queensland Show (also known as the Ekka) in Brisbane, a 10-day event which attracts about half a million visitors, in August.

Mr McCulloch qualified to compete at the Hawkes Bay show during a competition at last year's Waimate A&P Show.

While used to working with Coopworths, Dorset Downs and Texels at home, he was faced with judging Romneys and Suffolks in the sheep section at Hawkes Bay.

He had to place the four sheep in each breed and then speak about his reasons for placing them in that order.

Mr McCulloch only began competing in stock-judging competitions a couple of years ago, encouraged by his father Bruce and uncle Digger McCulloch, both well-known in sheep-breeding circles.

''I probably got into it because they made me,'' he joked.

Having grown up around stud sheep, he had been picking up tips and gaining experience over the years.

The public speaking element of the competition had also been good for him and he was getting more comfortable standing in front of people and talking, he said.

He believed the secret to stock judging was to go with your first impression.

''Go with whatever you think first, that's usually the way it is. You've got to have a wee bit of an eye for it as well,'' he said.

Mr McCulloch, who is involved with the Glenavy Young Farmers Club, was keen to see more young people get involved with stock judging. He was looking forward to his first trip to Australia.