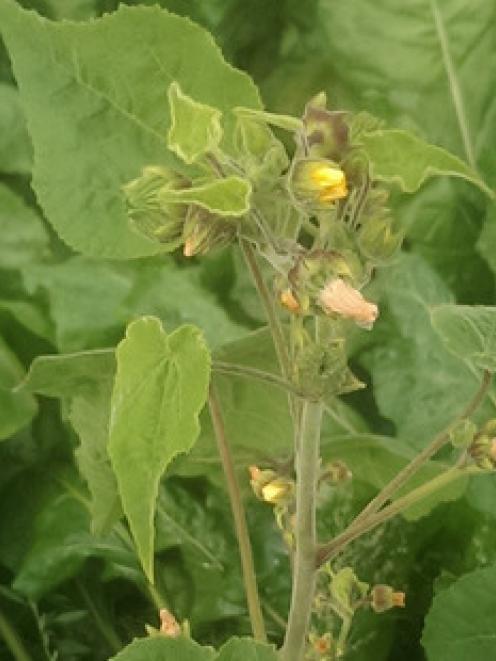 Velvetleaf standing above the beet crop it is growing in. Photo: supplied
Minister for Primary Industries Nathan Guy says he had "strong words" with his Italian counterpart after seeds imported from Italy led to a potentially costly outbreak of velvetleaf.

Labour has called for the company behind the beet seed importation to be prosecuted, but MPI is still considering its options.

The contaminated seed has been sown on more than 250 properties from Southland to Waikato, and is linked to beet seeds imported from Italy.

Ministry of Primary Industries and regional councils throughout New Zealand initiated an urgent response to the weed in March.

The invasive, broad leafed, prolifically seeding velvetleaf plant is capable of reducing a host crop's yield by more than 30 per cent and spreading further in the environment.

It grows to about a metre high, has very short-lived buttery yellow flowers, distinctively segmented seedpods and large heart-shaped or circular soft leaves that have an unpleasant odour when bruised.

Each plant can produce thousands of seeds that stay alive in the ground for years.

Appearing before Parliament's primary production committee today, Mr Guy was asked by Labour's primary industry spokesman Damien O'Connor how MPI allowed the outbreak to occur, when it had in the past blocked the importation of such seeds on the basis it was difficult to tell what could be contained inside them.

"I'm very disappointed that one or two countries didn't appropriately certify ... I've told -- actually in quite strong words -- the Italian minister when I met him at the OECD conference in Paris, how disappointed I was in regards to this."

"We are now working on some science about what herbicides can control and eradicate velvetleaf."

Mr O'Connor said disappointment "meant nothing", given the outbreak could potentially cost the country hundreds of millions of dollars. He said MPI should prosecute the company involved, to send a clear signal.

MPI said the matter was currently under inquiry, and a company was being investigated. However, the challenge was to prove knowing intent.

The highly competitive velvetleaf plant was first found in New Zealand growing amongst fodder crops on a Waikato farm in 1978, having arrived in contaminated imported seed, but was contained to only a few sites. This latest heavy incursion is far more widespread.

MPI has directed grain and seed retailers who have sold the Kyros and Bangor beet seed to hold any remaining seed in stock and to instruct customers to return any unsown product. Growers who have unsown seed should return it to the retail outlet.

Velvetleaf has been grown in China and northern India for thousands of years for its jute-like fibre, and edible seeds.