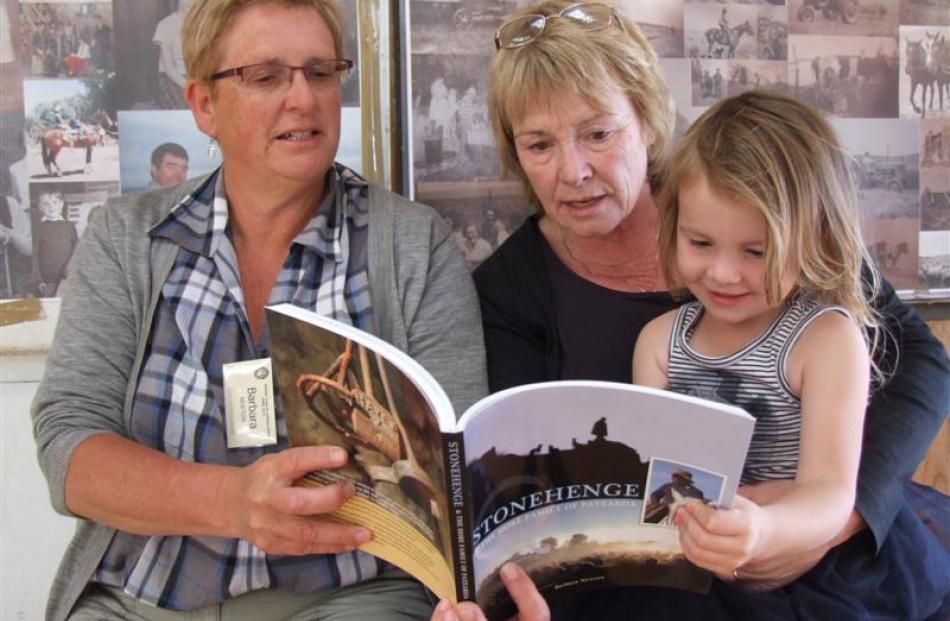 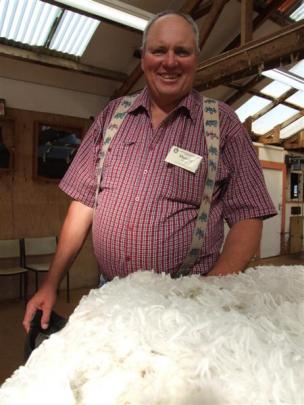 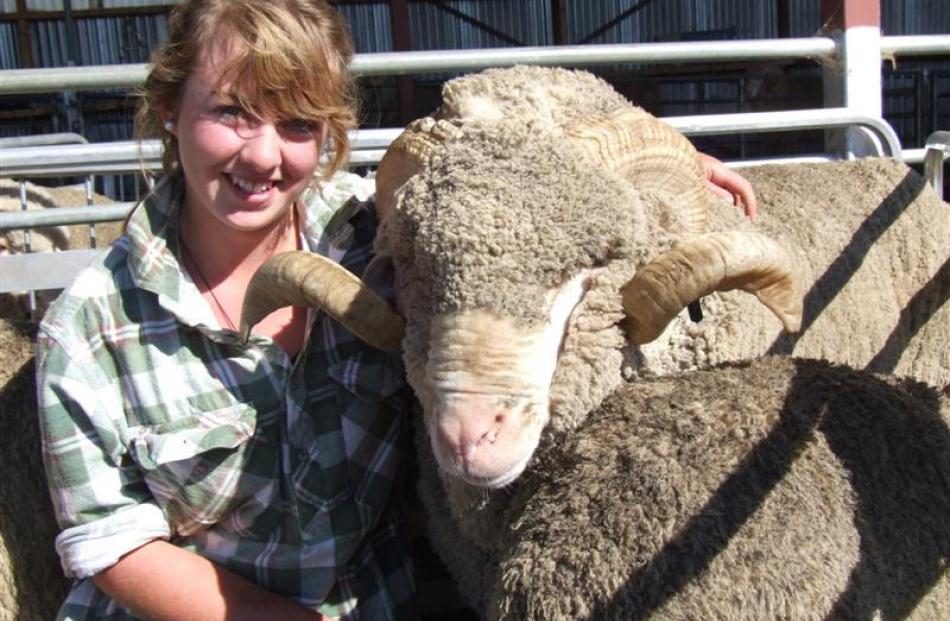 Ashley Boardman with a ram on display at Stonehenge during the Central Otago stud merino breeders tour. 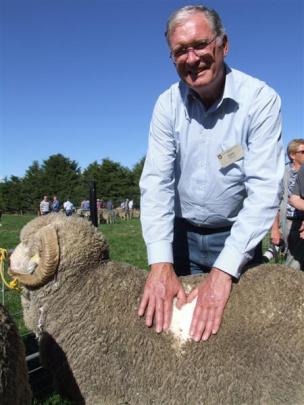 John Taylor, from the Winton merino stud in Tasmania, inspects a ram on display at the Paterson family's Armidale stud at Gimmerburn. 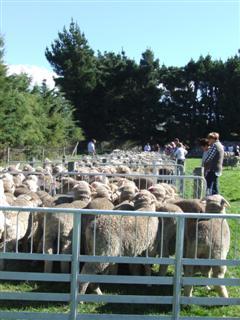 Some of the many merino sheep on display at the Paterson family's Armidale stud.

When it comes to the history of sheep studs, it is hard to go past the Taylor family from Tasmania.

The Winton merino stud, established in 1835, is the oldest continually running stud still in the same family, in Australia.

The stud was founded by David Taylor, whose great-great-grandson, John Taylor, was on the Central Otago Stud Merino Breeders tour last week with his wife Vera. It was the first time Mr Taylor had been on the tour and he was impressed.

The sheep were "looking a picture" and he believed both their size and wool quality would surprise a lot of people in Australia.

The Taylor family's operation comprised about 3237ha, running about 12,000 sheep, 250 head of cattle and also cropping.

Irrigation meant they were able to irrigate everything from potatoes to poppies and grass seed, so the operation has become a lot more diversified.

But merino sheep were still a passion and while John Taylor still did some of the classing and lent a hand, the stud was mostly in the hands of the next generation - his son, also called John Taylor.

The Winton stud has sold sheep to New Zealand in the past, including to Mount Cook Station and Moutere Station.

Mr Taylor said he was passionate about the wool, its softness and brightness.

"The style, particularly of the Saxon merino, its unique." Fellow Australians Murray and Nella Price, from Glen Maye in New South Wales, were also enjoying themselves.

They came on the tour at the encouragement of Mr Price's parents who came when it was last held in 2004 and suggested they should do it this time.

Mr Price is the fourth generation to farm in the area and he and his wife run about 4000 superfine merinos, including a merino stud, on the 1500ha property, along with some fat lambs and about 50 head of cattle.

The couple started their stud in about 1996, wanting to breed rams for their own sheep.

They were into the finer end of the breed, with this year's hoggets at 14.8 micron.

Allan and Simon Paterson, from the Armidale merino stud at Gimmerburn, had a large and impressive display of sheep, as well as wool, to view.

Allan Paterson, who has been on the property for 35 years, described it as "the most unbelievable season".

He cited the amount of hay that had been made and gone out of the Maniototo and store lambs that had come into the district, whereas often, it was the other way around.

It was a good time to be in the industry, with both the season that had been experienced and also relatively good prices.

Wool and meat prices were both very good, even though the schedule had come back a bit.

And initiatives in the meat side of merino marketing were also helping lift the profile, he said.

At the Hore family's property, Stonehenge, at Patearoa, Jim Hore and Barbara Newton signed copies of a newly released book documenting the family's occupation of the property for more than 100 years.

Stonehenge and the Hore family of Patearoa was written by Mrs Newton who has many strings to her bow, including author, wool classer, massage therapist and freelance photographer.

Mrs Newton, who has been classing the Stonehenge merino clip for 22 years, said she did not consider herself a writer, "just a collector of facts".

The Hore family book was her third history book, following books on St Clair and Albert Town. Not only was it a history of the family, which has farmed at Stonehenge since 1910, but it also outlined what had happened over the years, how things had changed - irrigation was probably the biggest change - and farming practices, she said.

Mrs Newton, who was the merino tour photographer, was originally a "city slicker" from Dunedin. But she had two uncles in the wool industry and her mother used to spin wool.

The first merino clip she ever touched was from Galloway Station. "That was it, I was hooked."

She loved the animals and loved working with wool and there was nothing more magnificent than a full-woolled merino ram, she said.

With classing only taking up three months of the year, she trained as a massage therapist.

She had a long-time interest in anatomy and had also always had regular massages.

She had been trying to drum into those working in the shearing industry that they should be looking after themselves, not just through nutrition and hydration, as it was very repetitive work.

Having been classing at Stonehenge for more than 20 years, Mrs Newton was "part of the place now", Jim Hore said.

The Stonehenge merino stud was established by Mr Hore and his brother Neville in 1969.

When Neville Hore went "over the hill" to Mt Alexander in Danseys Pass, Jim took over his share.

Now, the next generation, Jim and Sue Hore's sons, Charles and Andrew, were both keen on wool and stock and Jim hoped they "keep on going".

She did not enjoy that, nor a subsequent six-month stint working on a dairy farm.

After doing lamb-marking for both Jim and Neville Hore, she landed a job at Stonehenge, where her duties included stock work and irrigation.

"Jim's really good. I've learnt so much. It's a better education than uni." Before moving to Patearoa, her farming knowledge and skill was "pretty basic".

She had since learnt to shear a sheep, along with "just stock sense, stockmanship and all that sort of stuff".

Being a stud property, she enjoyed learning about breeding and also about merino wool.

It was a job that kept her busy all the time but she loved both the work and the lifestyle.

Being female was no barrier to her work - "I always give everything a nudge" - and there was not much she could not do, she said.

As for the future, she expected to travel overseas and wanted to own or manage her own farm eventually.

About 130 people undertook the entire tour while between about 40 and 50 did parts of it.

The standard of presentation of sheep throughout the tour was "very, very high".

In addition to some Australian visitors, there were also six merino enthusiasts from Argentina.