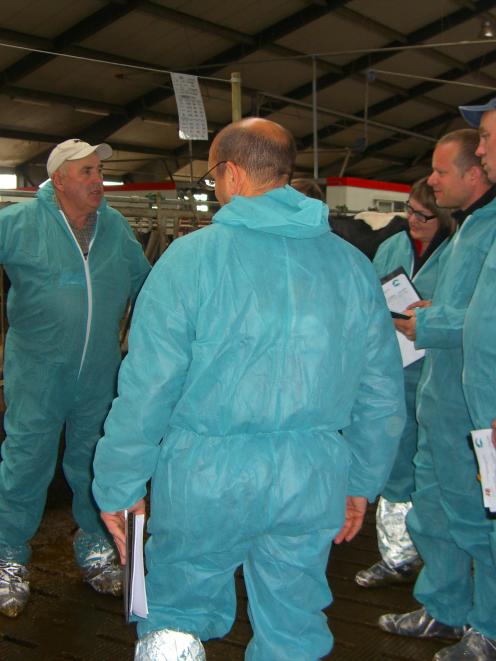 As well as being a dairy farmer who is trying to retire, Mr Aitken, of Maungatua, is a member of the World Holstein Friesian Federation Type Harmonisation working group. He spent some time in Denmark attending its two-yearly meeting in May.

The working group was seeking to standardise or ''harmonise'' 18 different physical traits in Holstein Friesians by classifying or precisely defining the ideal of each of those traits and promoting the evaluation system.

This meant classifiers would be able to evaluate animals to a common international standard.

''It is so people are talking the same language [when discussing cow traits],'' Mr Aitken said.

''The group started 22 years ago and now we have 23 countries represented with 45 participants.''

He had attended five group meetings in the past 10 years but it was the first time he sat on the panel. While there, a training workshop for the classifiers was held and they also visited dairy farms in both Denmark and Sweden.

He said New Zealand's national Holstein Friesians herd was ranked comfortably in the top 15 for meeting the standards.

However, part of the reason New Zealand was not higher in the rankings was while Europe and the United States use a lot of the same bloodlines, Australia and New Zealand tended to used their own home-grown, grass-fed bulls.

''New Zealand grass-fed cattle are a unique strain,'' he said.

''Therefore we are never going to get a perfect match.

''However, our standards are no different.''

However, Mr Aitken said New Zealand had a problem with rump angle.

''It is too high and needs to be reduced a little bit.

''I put it down to the popularity of the show ring and breeding cows with a high pin bone.''

The meetings are held in different parts of the country and the next one will be in Argentina in 2016.

He would like to see the group meet in New Zealand at some point.

Mr Aitken is a classifier for Holstein Friesian New Zealand, and is one of 12 trained people who classify cattle throughout the country from mid-September to mid-December.

''Most are breeders who have a passion for the breed.''

In addition, they have contracts with LIC and CRV Ambreed to classify their animals to ''make sure we are all on the same page''.

Jersey New Zealand has its own classifiers and standards.

Mr Aitken is also a senior Holstein Friesian judge and chairman of the Traits Other than Production committee.