Home is where the cows are 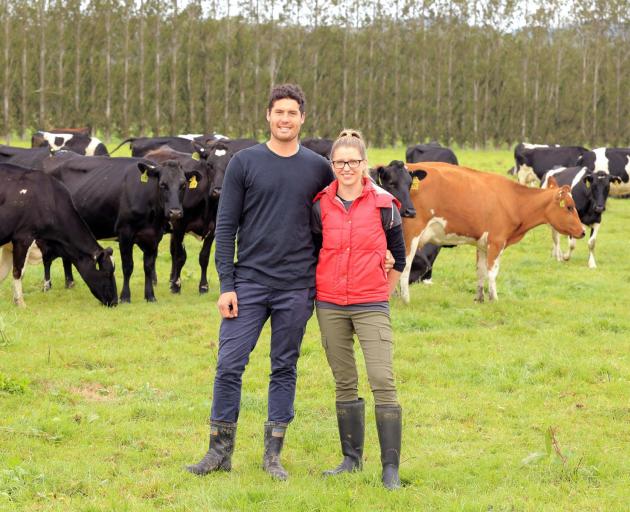 Kaitangata sharemilkers Mathew and Catherine Korteweg have confidence in the future of the dairy industry. Photo by Richard Schofield.
Running his family's dairy farm in South Otago was a long-term dream for Mathew Korteweg - not that he thought it would necessarily happen.

Mr Korteweg and his wife Catherine are now in their third season lower-order sharemilking on the Kaitangata property, milking 560 cows at the peak.

They say they are in the industry ''for the long haul'', armed with a solid plan and confidence in the future.

Still, they are expecting some headwinds each season, whether it involves compliance, health and safety or environmental factors.

Mr Korteweg's dairy farming parents, Stephen and Rhonda, encouraged their children to ''go out and do something else'' after leaving school.

So when he left boarding school in Dunedin, he completed a certificate in landscaping at polytechnic.

Following the year-long course, he worked for a landscaper in the city for a year before heading to France to play rugby for four months.

Returning home, he worked as a landscaper before heading to Australia for four years where he played rugby, spent time doing mineral exploration for a geology firm - ''looking for gold basically'' - and managed a dairy farm just out of Melbourne for the last 18 months.

The high-input non-irrigated property in West Gippsland was owned by an expat Kiwi and working there was a good experience, Mr Korteweg said.

When his brother Blake moved on from the family farm, Mathew jumped at the opportunity to return home to farm.

He admitted it had ''certainly been a challenge''. The year before the couple returned home was the record payout year but that was not a factor in the move.

''To be honest, that didn't even cross my mind. I never thought I'd get a chance to come home to the family farm,'' he said.

His brother had been doing a really good job and was well established.

But he had always said to himself that if he ever had the chance to head home, he would.

Working for someone else in the interim had been a very valuable experience, he said.

Mathew and Catherine Korteweg were runners-up in the Share Farmer competition in the 2016 Southland-Otago Dairy Industry Awards and also picked up merit awards for human resources, dairy hygiene and business performance.

Mr Korteweg was an advocate for DairyNZ's Dairy Connect, a support service launched in 2012 to facilitate the sharing of information between farmers.

Farmers seeking information about a specific dairying topic could sign up and receive advice from a support farmer willing to provide support and advice on a range of subjects from animal management, staff, pasture and feed through to environment, business, adverse events and personal wellbeing.

The service was available to all farmers: owners, sharemilkers, managers, contract milkers and farm assistants.

Keen to explore whether the possibility of once-a-day milking was suitable for his farm system, Mr Korteweg submitted his details to Dairy Connect.

He subsequently received a call from a support farmer who provided him with further information, including answering his questions.

The service was ''definitely beneficial''. It was an easy process to enter his details and the call came just two days later.

There was no 'beating around'' trying to gather information, he said.

What particularly impressed him was that the service catered for everyone from a farm assistant looking for more information about progression in the industry to a farm owner looking to put in a new effluent system.

Mr Korteweg was still interested in once-a-day milking although, if anything was to happen, then it would still be a couple of years away, he said.

In Otago and Southland, there were 57 Dairy Connect support farmers and 420 were involved throughout New Zealand.