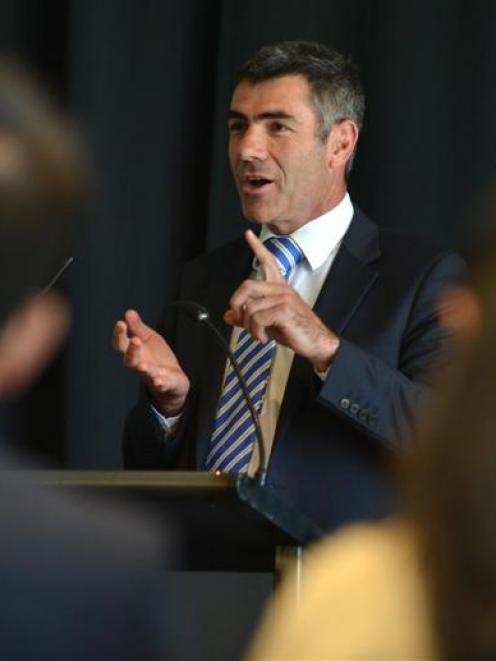 Addressing the recent Global Food Safety Forum in Dunedin, Mr English likened the fiasco, which turned out to be a false alarm, to the earthquakes in Christchurch.

Christchurch now had a better city and he believed the incident should be like an earthquake for Fonterra and the dairy industry.

''If they can't get, frankly, their s*** together so that they are better for it, then I think New Zealand's in a lot of trouble ... I hope that they do but the jury's out for me,'' he said.

The response from the Government to the incident showed how seriously New Zealand took food safety issues. There were not many countries who had the prime minister commenting on food safety for a specific company, he said.

Primary Industries Minister Nathan Guy said the scare highlighted the critical importance of supply-chain management and ensuring traceability at all points through the supply chain.

Ensuring safe and secure food supply was one of the most fundamental responsibilities of any government and one the New Zealand Government took ''incredibly seriously''.

A successful food business must also play its part. The key to success would often be the ability of a company, or a country, to respond to the market, to recognise and manage risks and to seize opportunities.

Consumer interest was increasingly going beyond food safety into values-based attributes such as animal welfare, sustainability and production methods. Some areas were covered by regulation and some were not, but all benefited from a collaborative approach.

The process of globalisation had many consequences; in the food area, it meant suppliers were more connected to markets and consumers than ever before, he said.

For New Zealand, which exported to nearly 200 markets around the world, the increased connectivity - and the inevitably increased scrutiny which resulted from it - had its challenges.

Both Government and business had to be smart about keeping up with consumers' changing expectations.

ExportNZ executive director Catherine Beard said food safety was all about good systems and trust. ''You've got to be doing what you say you're doing''.

There had been the rise of the consumer and, at the end of the day, the consumer was ''king and queen'', she said.

Technology was going to help hugely with verifying what consumers were eating was what they thought it was.

A lot of small to medium exporters in New Zealand, who did not necessarily have a lot of resources, often had difficultly in interpreting rules coming from government. Having some clarification concerning those rules would be very useful.

A challenge for the export market, particularly in developing markets, was encountering different treatment at different ports for the same goods.

She believed New Zealanders had to educate themselves and understand language and cultural reasons for some of those problems.