Horsing around a serious pastime 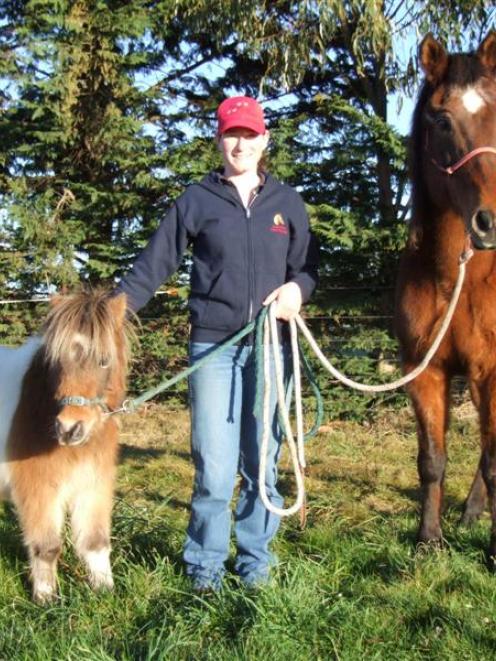 Tara McConnell at home at Flag Swamp with Laddie and Trixie. Photo by Sally Rae.
Ask Tara McConnell how she fits everything into her day and the answer is simple - with a head-light.

Miss McConnell (24), of Flag Swamp, works as a shed-hand for a shearing gang four days a week, but the rest of her time is consumed with horses.

Horses have been her passion virtually since she was born, ironically to non-horsey parents, and she believed her first word was "horsey".

She admitted she did not have time for a social life and while she used to go to salsa dance classes, she no longer had time.

She is doing a course through HoofNZ, a hoof-care organisation whose goal is to provide a quality natural hoof-care training programme to support the growing demand for professional trimmers, to become a fully qualified practitioner.

Her interest in natural hoof care was whetted in her teens and, after doing some research, she got in touch with Pete Ramey, a hoof-rehabilitation specialist in the United States.

She learned "heaps and heaps" from him, gaining tips and information through emails, and started trimming the hooves of her horses, then for friends and now for clients.

She has trimmed the hooves of all sorts of horses and donkeys - from miniature horses to Clydesdales.

Barefoot horses were becoming popular in the North Island, with some excelling in all the equestrian disciplines, and increasing numbers of people were more inclined to the barefoot option, she said.

She is also studying Equine Touch, a non-diagnostic, non-invasive equine bodywork system, which she described as a cross between massage and acupressure.

As well as trimming and body work, she does laser therapy, saddle fitting and recently started a herbal course.

"Everybody's telling me I need to do dentistry as well," she said.

Her clients stretch from Outram to Herbert and as far inland as Macraes, while most of her work is in the Dunedin-Mosgiel area.

When looking at a horse, Miss McConnell always starts at its feet, before being drawn to any body issues.

Miss McConnell would eventually like to work with horses full-time and have more rehabilitation cases at home, for which she sees an increasing need.

In 2010, she travelled to Australia's Northern Territory and followed brumbies in the wild, sleeping rough in the outback.

It was exhilarating getting close to stallions with their bands of mares and foals, she said.