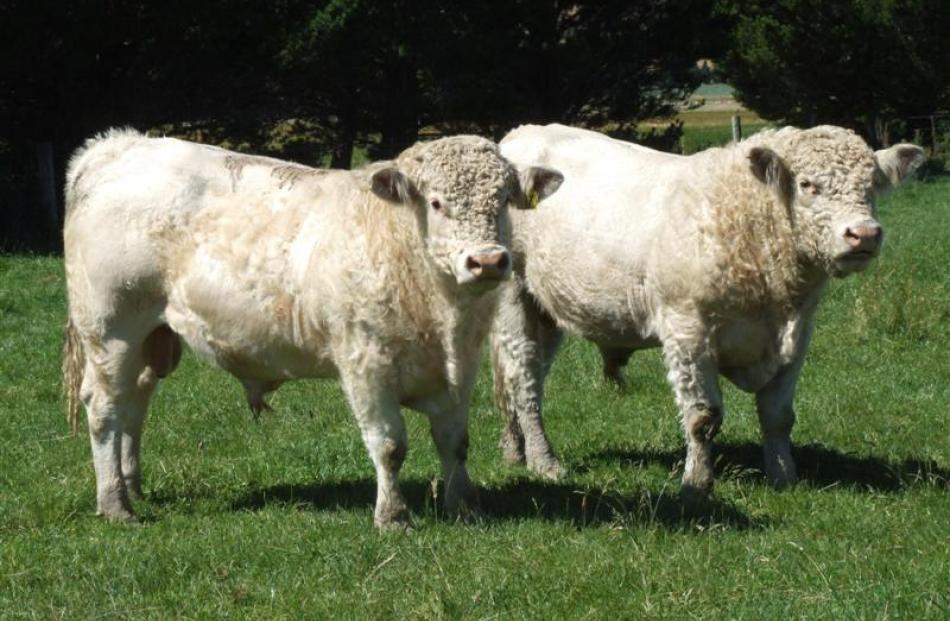 Two of the bulls that will be offered at this year's Taiaroa Charolais bull sale in May. 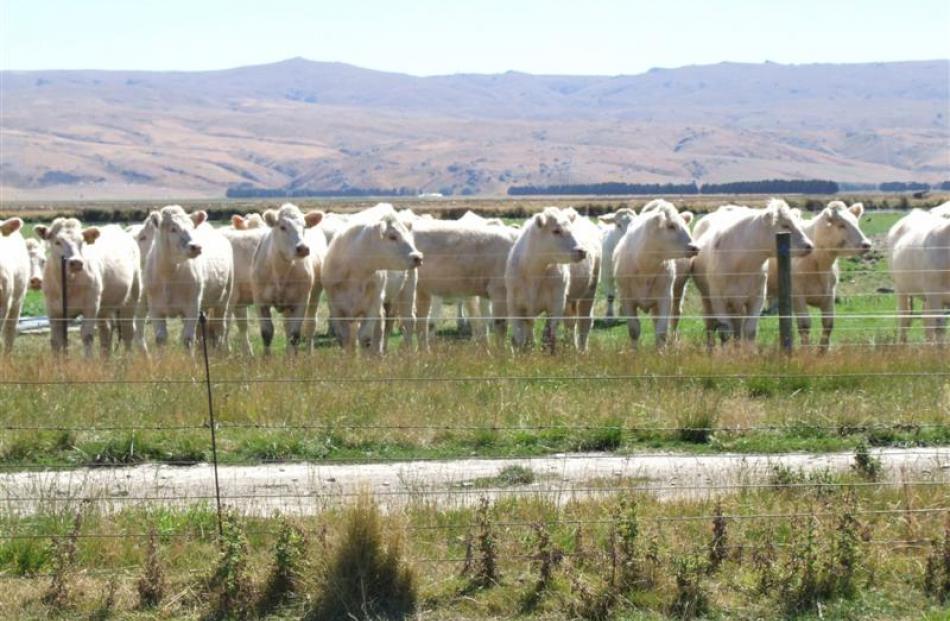 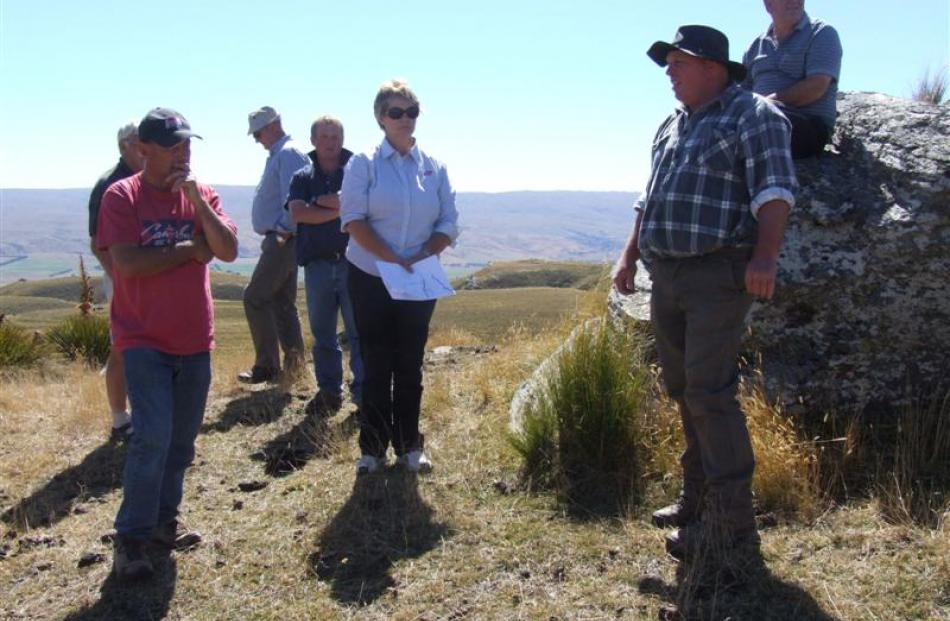 Drew Dundass reckons the Charolais breed of cattle is a ''beautiful animal''.

Mr Dundass, who jokes that he married into the breed, and his wife Carolyn (nee Aitken), manage Glen Ayr, a 1577ha property in the Paerau Valley, home to the Taiaroa Charolais stud.

Glen Ayr Ltd comprises two properties - Glen Ayr, and Glenfield, a 600ha finishing property on the Maniototo Plain which has a 343ha run block in the White Sow Valley, managed by Mrs Dundass' sister, Dawn Sangster, and her husband David.

Mr and Mrs Dundass hosted a field day at Glen Ayr last week, which included a farm tour with spectacular views over the Maniototo and an opportunity to view their cattle.

The Charolais breed was developed and established in the Charolles district in central France.

The first Charolais semen was imported to New Zealand from Britain in 1965 for trials at Lincoln and Ruakura.

The following year, commercial semen was brought in by the Sutherland family of Centrewood, Waimate, while the New Zealand Charolais Cattle Society was formed at a meeting in Oamaru in 1968.

The Taiaroa stud was founded by Tom Aitken, who ran shorthorn cattle prior to 1966.

After viewing some Charolais cattle at Waimate, he decided to artificially inseminate six cows. Delighted with the result, his next aim was to breed a purebred herd.

Artificial insemination was time-consuming, so he bought two purebred bulls, including the first New Zealand-bred purebred, and imported a heifer from England. Using embryo transfer, he got five bulls and one heifer.

They now had 61 mixed-age cattle and 12 bulls from the Organs' Cotswold stud.

Speaking at the field day, Mr Organ, who first used Charolais bulls when they were introduced into New Zealand, said he was excited to be involved in the joint venture.

The aim was to provide both commercial and stud breeders with a much better selection of better-performing bulls for purchase.

Over the years, he had been passionate about improving the Charolais breed, focusing on traits such as temperament, ease of calving, and achieving excellent growth rates.

The objective of the partnership was to work together to continually raise the standard of the breed and he was confident the bulls available to purchase would shift anywhere in New Zealand.

The condition of the stock at Glen Ayr was testament to the dedication, efforts and animal husbandry skills of Mr and Mrs Dundass, Mr Organ said.

He also acknowledged the efforts of Mr Aitken over many years.

Mr Dundass was impressed with both the quiet nature of the Charolais and also the hardiness of the breed.

Farming in the Paerau environment was demanding, with hot summer temperatures and frequent snow and heavy frosts during winter.

There was now 130ha under K-line irrigation, with the capacity to add a further 45ha. That irrigation was also essential for lamb finishing, baleage crops and striking winter crops.

At this year's annual Taiaroa bull sale in May, Mr and Mrs Dundass were changing to a live auction, and were in the process of building a sale ring, instead of selling by description.

It was expected to offer nine Cotswold bulls, while Mr Dundass hoped to offer between 20 and 23 Taiaroa bulls.

He would like to sell more bulls in the future, saying with the addition of the Cotswold cows, they had culled out some poorer cattle and had a better base to select from, so they should be able to select more bulls for sale.

Bulls were sold as far afield as Hawkes Bay, with many sold throughout Central Otago.

Temperament was a key factor in the operation.

''It doesn't matter what an animal's like; if the temperament's no good, it's gone,'' he said.

Mr Dundass was ''fairly optimistic'' about the future for sheep and beef producers, citing the quality of the product and the demand for grass-fed beef.

Alliance Group's yield grading sounded exciting and ''if we hang in there, we might be just turning the corner'', he said.

Nick Beeby, from Beef and Lamb New Zealand, who is the manager for emerging markets in the market development team, said while New Zealand had a small beef herd by international standards, it was on the ''world stage'' in terms of exports.

For a long time, the main market for New Zealand beef had been the United States and he could not see that changing in the short term.

The growth that had come recently from China had been ''pretty phenomenal''. In 2006-07, China was not on the list of New Zealand's top 15 beef markets. A couple of years ago, it was 12th-largest and and it moved up to third-largest last year.

Carl Alsweiller, Alliance Group's marketing manager for beef and general products, said food was a ''great business to be in'', with a growing global population, increasing consumption and a need for more protein.

Those who continued to produce lamb, mutton and beef would eventually get better pricing. Prime stock was decreasing as farmers moved out of sheep and beef.

Due to the growth of the dairy industry, dairy cows were now about 34% of Alliance Group's beef kill, compared with about 16% in 2007-08.

China was a ''shining light'' with insatiable demand. It had expanded to buying a full range of cuts and had become ''quite a dominant force'' with a growing affluent population, Mr Alsweiller said.

There were opportunities for quarter beef - China wanted to import more and Alliance Group was investigating how to modify its Mataura plant to handle quarter beef.

The United States beef kill this year was predicted to be the lowest in 25 years.

Food and supply security was important and New Zealand had an ability to capitalise on that, while free trade was a priority, he said.

Alliance Group procurement manager Murray Behrent said it was planned have a payment structure by October for the company's VIAscan yield-grading system for beef.

It was not about breed but about identifying the best sires in each breed. That was what happened in the sheep industry and it would be replicated in beef, Mr Behrent said.