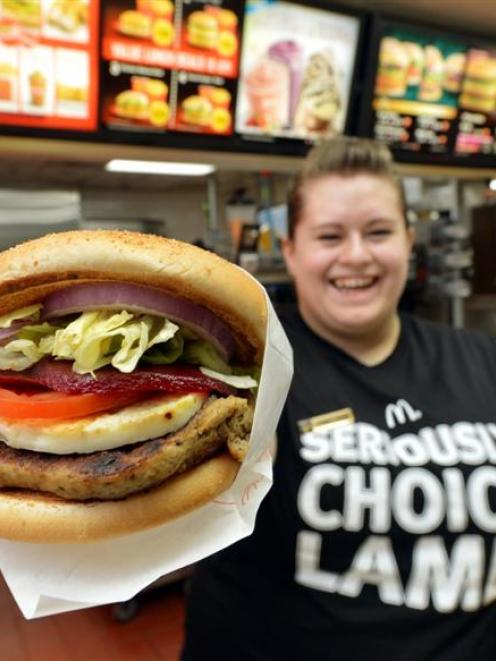 Shift supervisor Samantha Taane holds a lamb burger at McDonald's in George St, Dunedin. Photo by Stephen Jaquiery.
Farmers are fair fizzing at the launch of New Zealand lamb on to the menu at McDonald's restaurants throughout the country.

The Serious Lamb Burger - McDonald's largest burger - and The Lamb Snack Wrap have been launched following a two-year product development process. Another lamb product will be added in the coming weeks.

New Zealand is the only McDonald's market in the world to offer lamb on its menu permanently, managing director Patrick Wilson said.

McDonald's New Zealand has partnered with Beef and Lamb New Zealand, which is endorsing the new range of products, available at 160 restaurants nationwide.

Independent research showed 82% of respondents in New Zealand liked lamb but 65% said cost was the main reason why they did not eat it, Mr Wilson said.

"Lamb is so iconic to New Zealand, but sadly it has become unattainable for many Kiwis, due to its price.

"McDonald's is really excited to be adding this option to our menu and making fantastic lamb products available at an affordable price for our customers," he said.

Long-time sheep breeder and farmer John McDonald, from Cromwell, described the initiative as "amazing", saying it was getting lamb into a different market.

It was a healthy product, the recipes looked "brilliant" and that after tasting a burger, consumers "might want a roast".

Mr McDonald, who has been sheep farming on his own account since 1968 and breeding genetics since 1969, is passionate about sheep and genetics and was still "totally involved" in the family business.

He could see lamb "getting further and further up the scale as a more niche market" and he was feeling very bullish about sheep farming into the future.

"This is about adding to the lamb we produce because for the first time ever, lamb is to become a permanent menu item in a major family restaurant chain," she said.

As a sheep and beef farmer, Mrs Maxwell said she knew the positive impact McDonald's involvement with AngusPure had had.

Since August 2009, McDonald's had not only purchased some 2 million kg of AngusPure beef, but it had greatly raised the profile of it.

"This is where things get truly exciting. If lamb works here, it may find itself on to menus in other countries, the Middle East and Asia especially.

"New Zealand is already a major supplier of beef as part of McDonald's global supply chain and it is not a dream to believe lamb could well follow.

Frankly, we are excited because we can see only upsides from the farmer's perspective," she said.

She was also pleased to see the close co-operation from the farm gate and Beef and Lamb, as well as multiple processors.

"This is unity around a value-added product and it is as heartening as it is creative," she said.

Beef and Lamb chief executive Rod Slater was thrilled with the new partnership and the potential the products had "to get Kiwis eating more New Zealand lamb".

The export-quality lamb patties were made using shoulder cuts with the meat sourced from farms throughout New Zealand.

The patties were made at the Anzco plant in Waitara.

Mr Moore, now New Zealand's Ambassador to the United States, made a "somewhat throwaway comment" as trade minister in the 1980s that lamb burgers could be a way for New Zealand to diversify its lamb exports.

It drew much derision at the time and former prime minister Sir Robert Muldoon labelled him "Chutney Mike".

A tweet by Mr Moore set tongues wagging - "Ha! It is wrong to be right too soon. The big guys back the Lamb Burger & so does the little guy."