Lavender oils award success out of the blue 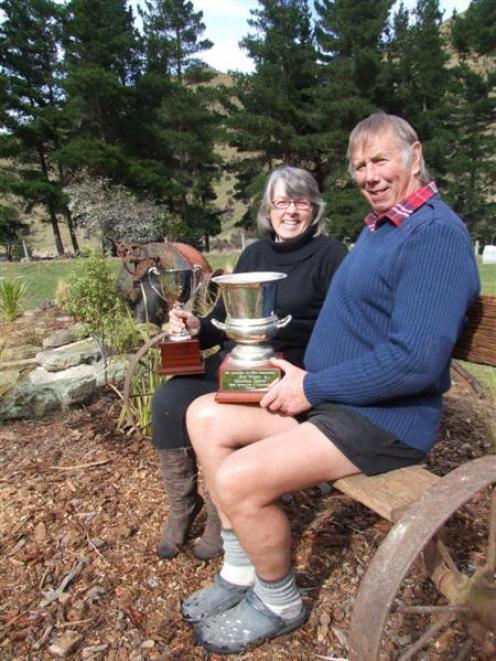 The first-time entrants were "totally gobsmacked" to win the Ken Wilson Memorial Trophy and the Eoin Johnson Memorial Cup for the best grosso and best lavandin oil respectively, along with a silver award.

Mr and Mrs Todd own a boutique lavender farm, Danseys Pass Lavender, in the remote Danseys Pass in North Otago.

The distilling is done by Russell Rofe of Hook Bush Lavender, near Waimate, who is very passionate about lavender and who has been very encouraging of their venture.

While they always thought they produced good oil, they had never previously had it tested. Mrs Todd sent if off, not knowing if it would get there on time, as it was posted on the last possible day.

There were about 60 entries, including oils from France, and the couple got a call "out of the blue" to notify them of their achievements.

The oils were judged by five judges for the following characteristics - aromatic notes like round, fresh or rich; intensity or impact of the aroma; definition and clarity of the individual aromatic notes; the balance between those notes and how typical they were of the particular cultivar.

Two particular types of lavender are grown commercially for oil - augustifolia or English lavender, and intermedia lavender - also called lavandin - a hybrid cross between an augustifolia and a latafolia, which grows in the wild at higher altitudes in the Mediterranean.

Lavandins are sterile and must be grown vegetatively.

They produce large amounts of strong oil used for the likes of soap making and candles.

Augustifolias produce a finer oil with a lesser volume.

Describing themselves as "real amateurs", Mrs Todd said they did things as organically as possible, using whatever resources were on hand. They used old sterilised beer bottles for the oil.

They were also not "super-fussy" with their plants, although Mr Todd - a landscaper and gardener by trade - was super-fussy with straight lines in the garden, his wife joked.

They have just over 2500 plants on their 4ha property, with the potential to produce between eight and 10 litres of oil.

The oil they produced was very intense, which Mrs Todd attributed to the climate where they lived - the heat and the cold.

Their situation was similar to the French lavender fields of Provence and it was "just fabulous" working outside, Mrs Todd said.

The couple have a shop on the property, which will open from Labour Weekend, and they encourage visitors to bring a picnic and enjoy the garden.

A new feature is a turbine, installed in the early 1940s to supply power to their house and a neighbouring property, but which was removed in the mid-1950s, with the arrival of electricity.

It had since been recovered and now has pride of place in the immaculate garden, which is often likened by visitors to a mini botanic garden, Mrs Todd said.

While Mr Todd is in charge of the maintenance work, Mrs Todd enjoys making things for the shop, such as lavender soap, bath bombs and candles. Lavender ice-cream, made by Riverstone Kitchen, is also available.

More motorists were travelling over Danseys Pass and the shop attracted plenty of interest.

"People just come across the purple gates. It's almost like there's no choice. People are very curious," she said.

The smell of the lavender also often evoked memories and strong connections to family stories, she said.