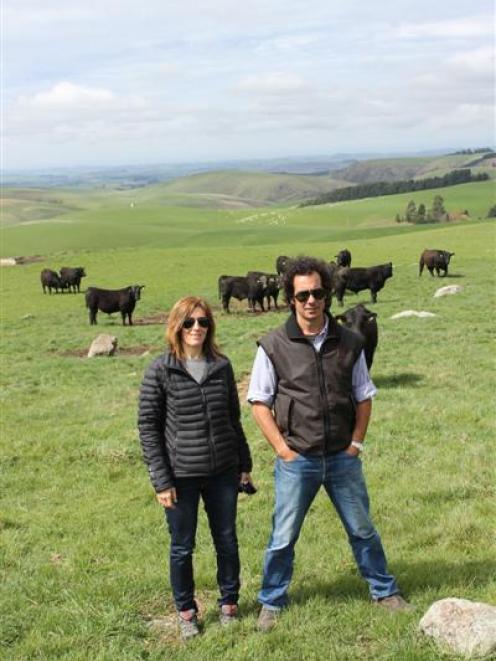 The international four-yearly forum, which was last hosted in New Zealand more than 30 years ago, is also celebrating the 150th anniversary of the introduction of the breed to New Zealand.

Before the forum, the South American couple visited the South Island, to spend time with North Otago Angus breeders Neil and Rose Sanderson, and join a pre-forum tour through Canterbury, Central Otago and Queenstown.

They had been using genetics from the Sandersons' Fossil Creek stud and were very pleased with the results, they said.

The couple live in a town of a similar size to Oamaru, which is 350km from Uruguay's capital Montevideo, but from what she could see, Ms Popelka believed it would not have quarter of the services.

Previously, they lived on Mr Arrosa's family farm Torre Alta, on the north bank of the Rio Negro river, but moved to Young, 60km away, for the education of their three children, aged between seven and 12.

The 1125ha property was mostly in an intensive production rotation and a large percentage of the area was used for cropping production.

Another 700ha farm was leased in the north of Uruguay, about 350km away. That was where the cows calved and the calves were later sent south to fatten.

It was an example of a ''whole cycle'' operation. The business bred its own Angus calves and fattened them with mainly self-grown crops. Between 400 and 500 steers were finished in their feedlot each year.

They produced about 90% of the feed given to the cattle and their crop rotation system included soy, sorghum, wheat, lotus, ryegrass and other pastures.

Ms Popelka was also involved in a family-owned water well drilling company, while Mr Arrosa looked after the two farms and was an adviser for two others.

The land around Torre Alta was very good which was why cropping had been invading the area - the likes of soy bean, corn, wheat, oats and barley - and so production had to be intensive, Mr Arrosa said.

Good prices were being achieved for cattle even better than for prime New Zealand cattle and the future was looking bright. Prices being achieved looked ''impossible'' 10 to 15 years ago, he said.

A law was introduced for land sustainability, which meant rotation was required. An increasing amount of cropping area could move back to cattle and total cattle numbers were increasing.

Uruguay was also the first country in the world to introduce traceability for all cattle.

While it was traditionally Hereford country, the Angus breed was growing very fast in Uruguay.

''It's very good blood for our conditions. It's been performing very well,'' Ms Popelka said.

Mr Arrosa started switching from Herefords 15 years ago and was now running all Angus. The breed performed very well in the feedlot and the meat was sought after in the industry, he said.

In 2005, they bought their first 12 pedigree served cows from the Bayucuá stud.

As it was such a closed system, from breeding to finishing, they could really see what the genetics were doing.

Mr Arrosa was concerned there were only three of four owners in the meat processing industry in Uruguay which was ''not good''.

To get necessary scale, that had seen them join a group of farmers that sold between 30,000 and 40,000 cattle each year.

The dairy industry was growing in Uruguay. Sheep numbers were down to fewer than half the sheep 15 years ago - and they had switched from Romney to merino to get a better price for fine wool. Forestry was also competing, although Mr Arrosa said it was not strictly competition, as they were trying to bring cattle in to graze under the trees.

There was very little irrigation in Uruguay but the Government was encouraging investment in the area, mainly in dams.

One of the major differences between Uruguay and New Zealand was that Uruguay did not have permanent pasture.