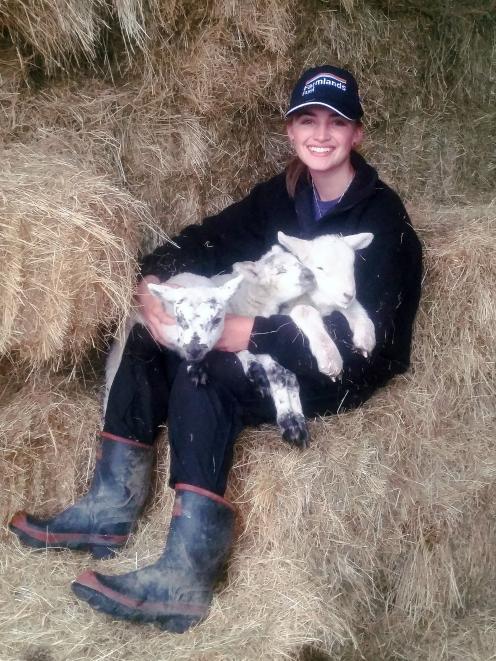 Scottish teenager Jessica England is enjoying an agricultural experience in New Zealand. Photo: supplied.
A long day in the sheep yards weaning lambs might not be everyone’s idea of fun  but Scottish teen Jessica England reckons she is living the dream.

Miss England (18), who left school this year, is having a gap experience in New Zealand working on farms.

Her family has a strong connection with New Zealand. She is the great-granddaughter of James Galloway who, with his father Robert, founded the J. W. Galloway business.

Scotbeef — one of the UK’s largest privately owned fresh meat companies — is a wholly owned-subsidiary of J. W. Galloway Ltd, and it processes product from the Alliance Group.

It was her late grandfather Ian Galloway’s wish for her to learn about New Zealand’s red meat sector "from the ground up".

He travelled widely before returning to head the company, including spending a long stint working on farms in New Zealand as a young man. Her mother, Suzie England, who works for Scotbeef, has also been to New Zealand on work-related trips.

Mr Mackie  worked with suppliers to arrange a series of homestays and she has spent time at Mt Nicholas and Walter Peak stations, on the shores of Lake Wakatipu, and at Barewood Station, between Outram and Middlemarch.

She is now at Caberfeidh, a 6000ha Lone Star Farms-owned property in the Hakataramea Valley.

Despite her family’s involvement in the meat industry, she was not from a livestock farming background. Her father, James, owned a cropping farm. Having never really worked with livestock before, she was loving "learning all the skills".

At Caberfeidh, she has been busy drenching and shifting mobs and, most recently, weaning lambs. With a 5am start and a 6.30pm finish and there were days when she was "shattered".

But it had been a "pretty cool" experience. She was also seeing the New Zealand countryside and gaining more independence.

"It’s definitely been worthwhile. I’d definitely recommend everyone do it," she said.

Horses were a major part of Miss England’s life and she was a keen eventer, training every day.

At Mt Nicholas, she mustered cattle on horseback, which was a memorable experience and she also did some riding at Walter Peak.