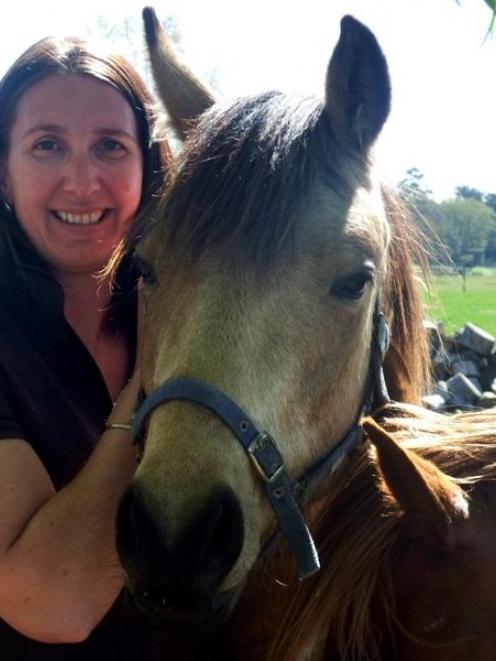 Natural resources engineer Keri Johnston at home on the farm with her horses. Photo supplied.
Keri Johnston was about halfway through her final year at St Kevin's College, in Oamaru, when she decided to pursue an engineering degree.

Ms Johnston had always loved science and mathematics but laughingly recalled how she hated the sight of blood, which ruled out anything in the medical profession.

After hearing a talk from a lecturer from the University of Canterbury School of Engineering, she decided engineering was something she might like to do.

Her first job as a graduate engineer was working for Meridian Energy on the second Manapouri tail race tunnel, working 10 days on, four days off, at the construction site. She was there when the big tunnel boring machine holed through.

After Manapouri, she did a stint with Meridian, in Twizel, doing dam safety. It was an area she was familiar with, having grown up in rural North Otago.

Marriage to Snow followed - he was farming on Banks Peninsula - and having realised that a long-distance marriage was not ideal, she secured a job with Environment Canterbury.

She started on resource consent work at the regional council and then moved into the river engineering section.

She was with ECan for three and a-half years before the couple moved to Mid-Canterbury to undertake dairy support, before she moved into consultancy.

Ms Johnston is now a natural resources engineer at Irricon Resource Solutions, a company founded in 2006 which provides a mix of environmental engineering, scientific and consulting services to a wide range of clients.

She also has a one-third shareholding in the company.

At Irricon, Ms Johnston said she had "gone back to her roots" doing a lot of dairy conversions and working on water storage and irrigation development, basically anything land and water related on the engineering side.

She enjoyed the variety of her work - every day was different - and she was "not stuck in the office day in, day out", which suited her.

About 50% of her work time was spent in the office and 50% was in the field. She juggled her job with her role as a mother of two primary school-aged children.

She worked mainly from home, which was a farm in Beautiful Valley, between Geraldine and Fairlie.

Once she had put the children on the bus in the morning, she had until they got home from school to do her work.

She enjoyed the variety and also the rural aspect of it.

Her clients stretched from Kaikoura, in the north, down to Central Otago.

"I do a few kilometres in a year," she said, laughing.

Water was a hot topic now and both ECan and the Otago Regional Council were starting to change the targets in terms of what the councils expected.

Farming practices would have to change accordingly.

Ms Johnston said she had "no qualms" about people having to do best practice.

There were people doing it "perfectly" while others did need to change what they did, she said.

Irricon was slowly expanding and had gone from being three individual owners to having six additional staff.

When the company was set up, it involved nearly all working parents and there was not the expectation that they should be in the office five days a week.

While there were once quieter times, during the past couple of years, with more of an emphasis on compliance issues, those quiet times "aren't there any more. It's just constant".

Coming from a rural background was an advantage.

"I talk the same language and understand you're dealing with people's livelihoods.

"I turn up and know the difference between a heifer and a cow. I normally wear jeans and gumboots, I don't turn up in a suit."

Her father was once a stock agent based in North Otago and she was now finding she was dealing with some of his clients.

Ms Johnston loved her busy lifestyle and, if work and family commitments was not enough, she was also a keen horsewoman and was rearing 150 beef calves "because I've just got nothing else to do", she said, laughing.

"Working from home, I have the advantage if it's a nice afternoon and I've had a gutsful of paper work, I can say ... I'm off to ride the horse. You've got that flexibility."

While she had her "day job", farming for Ms Johnston and her husband was their business and she still had an active role in the farm.

Her husband was very supportive of her. "I couldn't do what I do if it wasn't for him." She enjoyed the "fantastic" South Canterbury community in which she lived and it was also a central location from which to travel to clients and the Irricon office in Ashburton.