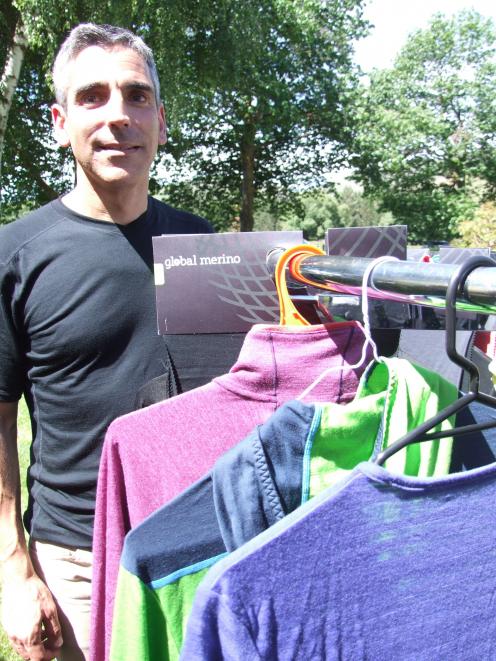 In August, the company’s founder and chief executive Jose Fernandez and his family moved from the United States to Spain.

The company itself remains based in California, there is an office in Bangkok, its technical director is in Melbourne and much of its merino wool is sourced from New Zealand.

Global Merino is a technical textile manufacturer, founded by Mr Fernandez in 2007, which uses merino wool as a primary ingredient and in a variety of ways.

Some of its textiles were 100% wool, others were blended and some were unique constructions. Customers included giant outdoor brands such as Patagonia, along with sports specialist brands catering for the likes of cyclists, skiers and runners.

Mr Fernandez had been in New Zealand recently and his visit included meeting growers at a gathering at Glenbrook Station, between Omarama and Twizel, where he outlined his business.

PGG Wrightson Wool business development manager Craig Smith said it was an opportunity for merino growers to interact with the end user of their wool.

They could find out where their wool had gone and in what products and brands it had been used.

Global Merino was an "exceptional" technical fabric maker and Mr Fernandez was extremely passionate about the wool he needed, Mr Smith said.

Three years ago, Global Merino sourced 20 tonnes of wool top from New Zealand and that had grown to more than 200 tonnes so growth had been "very, very quick", he said.

"One of the things I like about this programme, we’ve found a person that appreciates the wool that you’re growing," Mr Smith told growers.

One reason for Mr Fernandez’s shift to Spain was to grow Global Merino’s business which was skewed at 90% North American and 10% European.

Mr Fernandez hoped to balance that out, which meant doubling the business in the next five years.

At the same time, he thought it would be a good experience for his children and, while they were initially "shell-shocked" at being dropped into a different culture, they were now embracing the experience.

Mr Fernandez grew up in upstate New York and studied economics and sociology at university. His career started in retail and moved into product manufacturing.  He first ended up in New Zealand about 20 years ago, doing business with tanneries in the South Island. His work eventually evolved into taking the opportunity to start his own business. In simplistic terms, it was "product marketing and product development 101", he said.

It was about figuring out market opportunities and what customer need was and determining how to meet the need and then do that. It was not a complex formula, he said.

Global Merino looked at what a runner or a cyclist or a skier needed — and  their requirements were all different — and then examined the technical properties of merino and how to apply them  to those needs.

There were athletes among the staff members and Mr Fernandez himself was a keen cyclist and skier.

Technology in textiles and synthetics was always evolving. Global Merino’s challenge was to continue to service its customers as it expanded the business, making sure it continued to come up with new ways to add value to merino, he said.

The consistent message from customers was "we see things from you we don’t see elsewhere" and that helped Global Merino better position itself against the rest of the market.

There was a general trend towards natural fibre. He believed consumers, particularly young people, were looking for solutions that affected the environment less.

"It’s a bit more thoughtful approach to product evaluation. People just want to be a little bit more aware of the impact they are having," he said.

This year, Global Merino contracted 210 tonnes from New Zealand, 50 tonnes from Australia through contracts and another 100 to 120 tonnes were bought at auction.

Also this year, the company made a commitment to move away from commodity wool.  It was the first textile manufacturer to commit 100% to direct-sourced wool, so that 100 to 120 tonnes would now have to be obtained that way.

As for future plans — "besides taking over the world", he quipped — it was about continuing to be a resource for differentiation, he said.