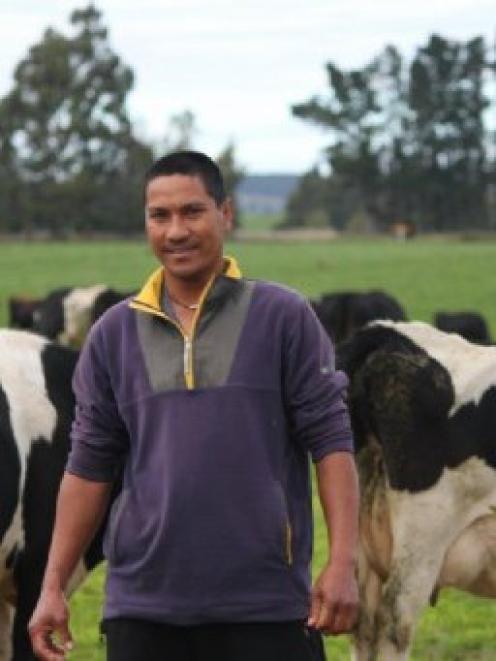 Joseph Alegado has worked for Duntroon dairy farmers Geoff and Jan Keeling for the past four years. Photo by Jan Keeling.
Two new guides to help migrant dairy workers and their employers work together more successfully have been launched.

There are now about 1500 migrant dairy workers in the country, making up 6% of the workforce, with the majority from the Philippines.

Demand had increased in recent years, as it had proved difficult to attract and retain local workers in some parts of rural New Zealand, Immigration and Associate Primary Industries Minister Nathan Guy said.

"The dairy industry is worth more than $13 billion in export value to New Zealand and is our largest single exporter. It's in everyone's interest that migrant workers fit easily into rural communities."

The guides have come out of the Migrant Dairy Workers Initiative, which was set up by Immigration New Zealand in February last year in response to concerns about the welfare of migrant dairy farm workers and their families.

Duntroon dairy farmer Geoff Keeling welcomed the guides, saying the working culture on dairy farms could be quite a shock when migrant workers first arrived.

There were the number of hours they had to work, the physical nature of it, and the fact they were expected to work in "rail, hail and shine".

The guides also made Kiwi employers realise the leap that those workers were taking, in what was a complete culture shock, Mr Keeling said.

He and his wife, Jan, employ two Filipino staff members among their seven full-time staff.

He said he found them very reliable, trustworthy and respectful, while other staff members also enjoyed learning about a different culture.

Filipino dairy farm manager Neil Molina, who has been in New Zealand about seven years, said the guides had to be a good thing. There were so many adjustments that migrant workers had to make.

Mr Molina, who works for Greg and Kelly Kirkwood and manages a farm in the Maniototo, has 12 Filipino staff.

Literacy North Otago manager Helen Jansen said the organisation was very mindful of the need for assistance for a lot of dairy workers, not just migrants.

But it was very difficult for them to regularly attend the centre in Oamaru, because of the hours they worked, and one of her focuses was to encourage trainee tutors from rural areas.