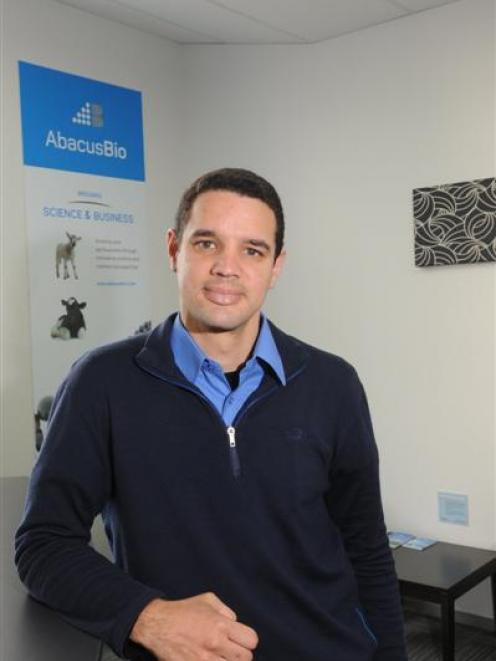 Mr Santos, who moved to the city in February to work for consultancy and new venture development company, AbacusBio, was joined by his wife, Renata, and their two young children last month.

He is no stranger to AbacusBio, having collaborated with the company on business development and technical projects in Brazil.

He also spent six months at AbacusBio in 2007-08 doing work on market research and genetic improvement.

Mr Santos has worked on sheep production for 10 years since graduating from Sao Paulo State University with a bachelor of animal science degree and a masters degree in animal nutrition and production.

He ran his own company in Brazil providing technical advice, strategic planning and genetic analysis services to agri-business companies, farmers and livestock breeders.

But then he and his wife, who is a large animal vet, specialising in reproduction, and the two decided they wanted a better quality of life.

They sold the business and also their 150ha sheep and cropping farm and moved to New Zealand "to start a new life".

They wanted a simpler life, in which they would spend less, live better and have time with family.

Mr Santos was also very enthused about his job, saying he was working "with the best guys in the world for genetics".

While he was from a city background, his grandparents farmed and he had always loved farming.

The sheep industry was not huge in Brazil, with about 16 million sheep, and consumption of sheep meat was low - about 600g per inhabitant per year.

Cropping, beef, oranges, sugar cane and coffee were the major agricultural earners in the country.

But sheep numbers were increasing and people were becoming more aware of sheep meat, especially lamb.

Farmers were selling lambs for about $US100 and a leg of lamb in a Brazilian supermarket cost about $US20 a kg, with a lamb rack at least about $US40 a kg.

The industry was the strongest in the northeast - where it was mainly for self-consumption and where the breed was predominantly Santa Ines, a hair sheep - and the south and-southeast.

Sheep productivity was low in Brazil, which frustrated Mr Santos, who said it could be "incredibly better".

That issue was not just confined to the sheep industry but also to dairy and beef.

Interestingly, the best dairy farm in Brazil, for milk quality, production and profitability, was a New Zealand model.

There were lots of opportunities but farmers were too focused on type and were resistant to change, he said.

Last month, Mr Santos attended the LambEx conference in Bendigo, Australia, and it was "just incredible" how advanced New Zealand was in the sheep meat industry. It was "so incredibly integrated".

While he was 'pretty sure" New Zealand's sheep industry was "recovering from the bad times", sheep farmers needed to be more profitable and the team at AbacusBio was trying to find ways to achieve that.

While the main customers for New Zealand lamb had traditionally been Europe, particularly the UK, new markets, including China, had been developing which was very exciting, he said.