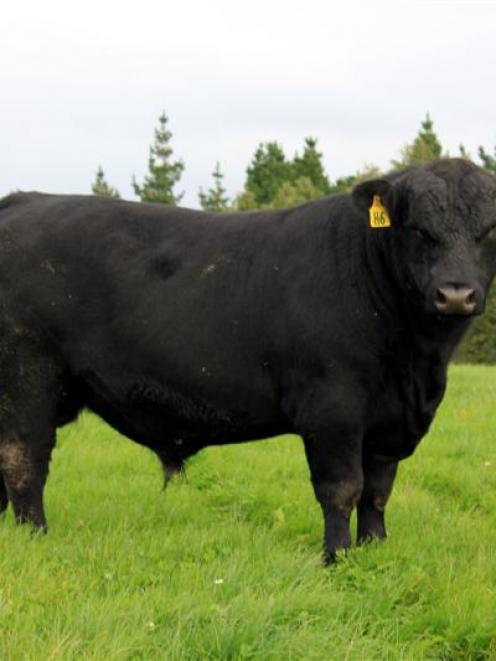 Fossil Creek Hero H006, which sold for $55,000. Photo supplied.
A joint record of $55,000 in this season's bull sales has been achieved by North Otago Angus breeders Neil and Rose Sanderson.

Fossil Creek Hero H006 was purchased by Tangihau Station, near Gisborne, at the Sandersons' recent on-farm sale at Ngapara.

Earlier this month, a Hereford bull from David and Rosemary Morrow's Okawa stud, near Mt Somers, also sold for $55,000 to the Kokonga stud at Tuakau.

A delighted Mr Sanderson said Fossil Creek Hero was a stand-out because of his very strong combination of type and also ''very, very good breeding values''.

He was very strong in his maternal traits, including very low birth weight, good calving ease and high scrotal circumference, and ''exceptionally good'' in fat cover.

''He ticked all the boxes,'' Mr Sanderson said.

There had been a lot of interest in the rising 2-year-old bull before the sale but ''not in our wildest dreams'' did the couple expect him to sell for so much and it was ''very humbling''.

He described the bidding as ''quite an electrifying time'' and it was also pleasing to achieve it at home.

Mr Sanderson was thrilled the bull was purchased by Tangihau, saying it was one of the leading studs in New Zealand.

Fossil Creek Hero was sired by imported American bull S Chisum 6175. A half-brother recently sold for $24,000 at Martin Farming's sale at Wakefield, and there was hype building around the sire, he said.

The sale was a highlight for the Sandersons in their stud breeding career and ''certainly up there'' with winning champion of champions with Fossil Creek Update at beef expo in 2008.

It was important the beef industry focused on performance and fertility as that was where productivity could be lifted, Mr Sanderson said.

''We've got to keep doing that in the beef industry to keep up with the dairy industry,'' he said.

He urged the industry to embrace the new entity Beef and Lamb New Zealand Genetics and find ways to maximise both reproduction and production from beef cows.