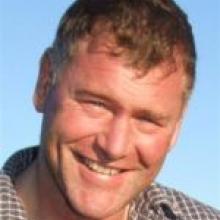 Richard Strowger wants to see farmers get a "fair deal".

Although New Zealand had a population of four million, there were just 45,000 farmers who produced "the wealth of the country" and Mr Strowger wanted to represent the farming community to help "give them a fair shot".

He has been a longtime member of the farmer lobby group, saying it was the voice for farmers and he was pleased to see membership growing.

After leaving school, Mr Strowger worked for Ian Morten at Orari Estate before spending a year milking cows in the North Island.

While he was studying at Lincoln University, where he completed a diploma in agriculture and an advanced diploma in field technology, he met his future wife, Colette, who is now CRT's North Otago district manager.

The couple spent some years in the dairy industry, on farms at Orari, Ashburton and Hinds.

Following a truck crash in 2005, in which he broke his neck, the couple moved to North Otago.

He had the fifth and sixth vertebrae rebuilt out of his hip bone and was left with permanent nerve damage.

They now live at Waianakarua, where they have a 122ha property running 1400 stock units, including a small Limousin cattle stud.

He saw "huge potential" in the F94L muscling gene found in Limousins. While the cattle had a reputation in the past for their temperament, he believed breeders had addressed that issue.

With 12 stud cows, it was a hobby that was slowly being developed.

Mr Strowger also has a consulting business, R J Agri-Service. He loved the dairy industry and that was why he decided to move into consultancy.

He has clients throughout South Canterbury and North Otago, along with some of his former neighbours in Mid Canterbury.

He particularly enjoyed seeing young people with drive and enthusiasm and helping them to grow their business.

While it was a busy lifestyle, community was important to Mr Strowger and he was looking forward to his term at the helm of North Otago Federated Farmers.

"It's about trying to get that fair go for the farmer," he said.