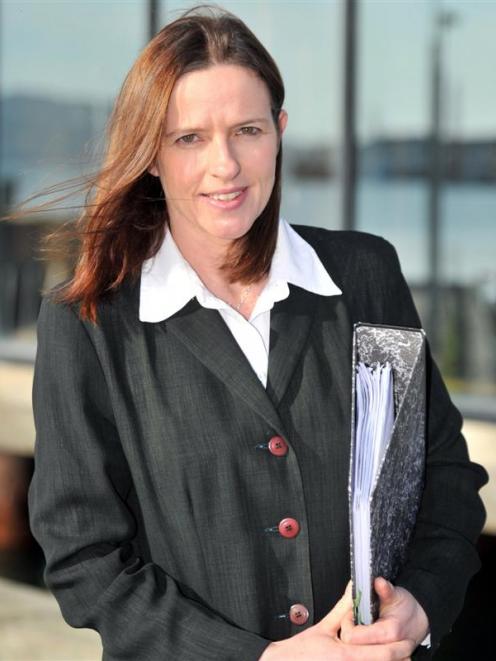 Federated Farmers regional policy manager South Island Kim Reilly describes the farming sector as being of huge importance to New Zealand. Photo by Linda Robertson.
Kim Reilly recalls how she was a ''ridiculous tomboy'', growing up in a farming family on the Taieri Plains, - so it was no surprise that she pursued a career in the rural sector.

Dunedin-based Mrs Reilly (41), a senior policy adviser for Federated Farmers, has taken over from Matt Harcombe as regional policy manager South Island, following his move to the Ministry for Primary Industries.

Working for the rural lobby organisation provided her with the challenge of utilising her tertiary qualifications, while also maintaining her passion for the rural lifestyle and a firm belief in the importance of farming.

She recalled how she grew up ''in woolsheds and dairy sheds'', on her family's mixed dairy, sheep and beef operation.

After leaving school, she studied law and commerce at the University of Otago, then headed overseas for three years.

Jobs followed in Alexandra and Wellington and she returned to Dunedin in 2000. Now with three children, she described it as a great place to raise a family.

Mrs Reilly, who joined Federated Farmers in 2011, said farming had become increasingly complex, from a regulatory point of view, and she enjoyed being able to ''take a load off the farmers'', by hopefully making their lives easier.

The agricultural sector was of ''huge importance'' to New Zealand, yet she believed that farming was underestimated and never given its true recognition.

She enjoyed seeing the passion for farming, whether from the organisation's members or its national board, and she also loved being able to see projects ''right through''.

While her past focus had been predominantly on the Otago-Southland region, Mrs Reilly's new role meant she had to get up to speed with issues South Island-wide. She was in charge of the South Island policy team which numbered six, including herself.

There was a lot happening throughout the island, particularly in regards to the environmental and water.

Having good family support meant she was able to balance work and family commitments. Growing up on a farm was a huge advantage, as it allowed her to have an understanding of issues.

Farming had changed ''hugely'' since she was a child. She was constantly learning from farmers and whether she was talking to board members or farmer members, there was a huge range of knowledge that needed to be tapped, she said.

Hopefully, farmers could see that the organisation could help to make a difference, she said.