One million beehives likely by Christmas 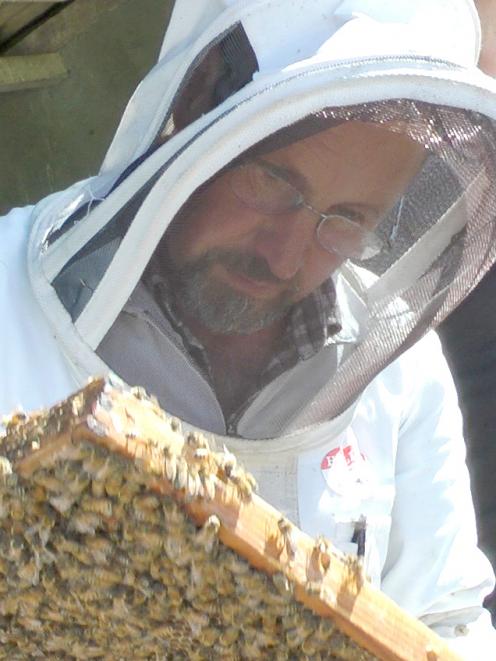 Southland Bee Society chairman Murray Christensen inspects a honeycomb. Photo: Supplied
The number of beehives in New Zealand is expected to hit the million mark by Christmas, and a Dunedin apiary equipment supplier is urging those interested in hobby beekeeping to ensure they have the appropriate mentoring, education and support networks in place before they start out.

Dunedin Beekeepers' Club president Brian Pilley said in the past two or three years he had seen a big increase in interest in the hobby.

The club has both commercial and hobbyist members from from a wide range of backgrounds, and provides education and expertise for the less experienced.

''We won't sell to people unless they have mentoring, a support network or belong to a club,'' Mr Pilley said.

''We are really conscious of people who have done a course, or get some hives and do not have a clue what they are doing.

''There is a more to beekeeping than most people realise as it is not like keeping a cat or dog.''

Inexperienced beekeepers could inadvertently cause problems for other apiarists in the area, particularly with issues such as varroa mite and American foulbrood.

''That could have a major impact on beekeepers so we have got to be responsible,'' he said.

Southland Bee Society chairman Murray Christensen said the number of hives nationwide was about 460,000 about five years ago but was expected to hit a million by Christmas.

The society ran presentations at events and he was often surprised at the number of people who attended.

''There is an insatiable appetite and beekeepers come from all walks of life.

''Out of a presentation we might get five or six new members and maybe two or three might become beekeepers.

''On top of that people perceive their honey produced in their backyard tastes better than anything else,'' he said.

The society also encouraged those interested in beekeeping to join a club for the education and support other members provided.

He said the manuka honey demand in the North Island was ''hoovering'' up spare hives in the South, particularly as the incidence of diseases was quite low.

Apiculture New Zealand non-commercial board member Paul Martin said the number of beehives and beekeepers had been rising ''exponentially'' for the past 10 years.

''Certainly, a huge proportion of those are hobbyists.

People were seeing the earning potential of the manuka honey ''gold rush'', which had led to an increase in the demand for hives in the North Island.

He agreed it was important hobbyists, some of whom would go on to become commercial apiarists, belonged to clubs for the support network.

''In addition, as soon as they start selling commercially, the food safety regulations come through.''

He said while there tended to be less risk associated with hobbyists' hives as they were not moved as often, hobbyists still needed to know what they were doing, to be able to manage and identify diseases, and understand legal requirements around registrations and inspections.

''The industry is at a stage of phenomenal growth and we need to manage that growth.

''It is also important to enjoy the hobby and that is where bee clubs come into their own.