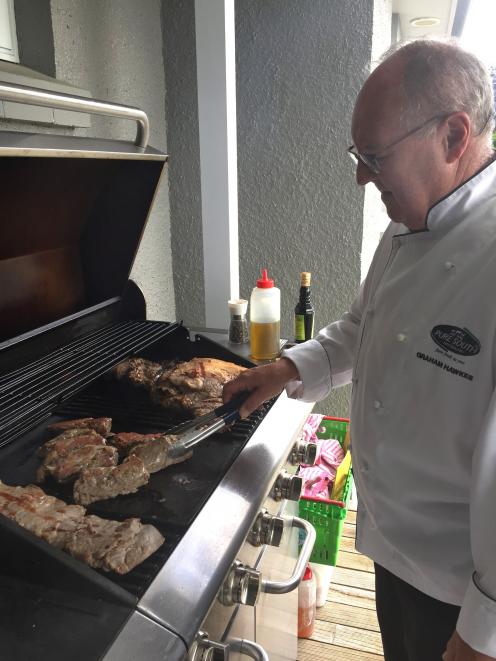 Chef Graham Hawkes barbecues Omega lamb during a gathering of farmers and chefs in Southland. PHOTO: SUPPLIED
It might still be early days for the Omega Lamb Project but feedback has been ``overwhelming'', general manager Mike Tate says.

The project involves bringing healthy fat back on to the menu by producing lambs with naturally higher polyunsaturated fatty acids, intramuscular fat and omega-3.

Promoted as being the world's tastiest and healthiest lamb, the project is a collaboration between Alliance Group, Headwaters Group and the Ministry for Primary Industries.

Last week, a gathering was held in the South, bringing chefs from throughout the country together with farmers in the Omega Lamb pilot group.

The aim was to raise awareness of the project in the food service sector and connect farmers with chefs.

Chefs from Auckland, Wellington, Christchurch and Central Otago attended and were hosted to a barbecue and discussion at The Lodge at Walter Peak Station, before visiting two farms - Stag Valley and Waifield - in Southland.

The lambs were bred in the hill and high country and brought down to graze selected chicory and chicory/red clover pastures.

The project had been about bringing together people from the entire value chain, from farmers, processors and scientists, to chefs and users, with relationships being developed with restaurants throughout the country, Mr Tate said.

The chefs loved seeing where the product came from while farmers involved got a ``real buzz'' from seeing what chefs did with it.

Some of the chefs had not visited the South Island before and they were ``blown away'' by the environment.

The farmers in the pilot group had been there throughout the project and understood the effort that had gone into focusing on quality.

It was now the second pilot year of production and the focus was on scaling up and getting all on-farm systems in place, he said.

At the moment, about 15,000 lambs were grazing on chicory and the majority would be processed at Alliance Group's Smithfield plant, at Timaru, where special measurements would be taken to ensure they met specifications.

The underlying thing for farmers was seeing that if you put effort in and focused on product quality and management, the market could ``tell the difference'' and reward you.

It was not a matter of producing kilograms of product, but about producing a fine food item, he said.

Describing it as a ``fabulous'' product, chef Graham Hawkes said the Omega lamb ``ticks the three boxes'' chefs were looking for - taste, tenderness and succulence.

A comment that came back repeatedly from chefs was also how easy the meat was to handle, Mr Hawkes said.

He was excited about the potential of Omega lamb, saying it was going to improve returns for farmers and opportunities for chefs on the plate.

``I never come across anything that's had so much work done on it prior to it coming to market,'' he said.

It was very important that the market survey was being done in New Zealand with chefs and the public.

Southland farmer Simon Saunders, from Stag Valley, said the project was getting to the exciting stage.

Hearing the enthusiasm of chefs meant ``you know the work we're doing behind the farm gate is paying off''.

For sheep farmers, the last few years had been a ``hard grind'' as far as lamb prices were concerned. Being part of a project that was ``really doing something quite different'' and getting feedback from the people that were using it was exciting.

Mr Saunders believed the project could be a game-changer in the industry. All involved had to keep working ``exceptionally hard'' to make it happen.

It was also about doing things differently. He and his team had to make a lot of changes in how the Stag Valley operation was run but they had embraced the challenge.