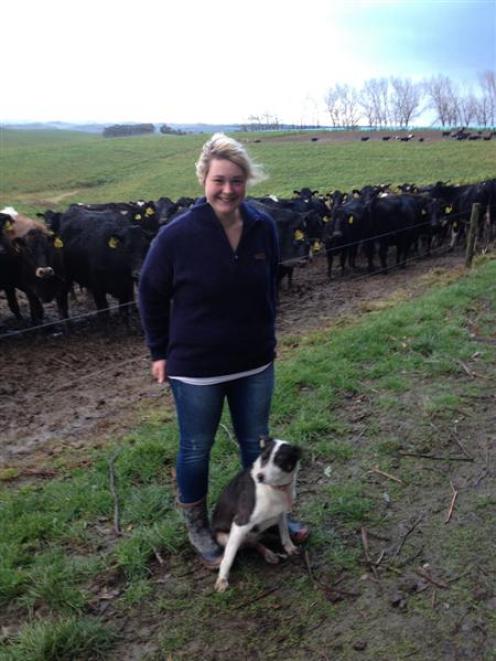 Maigan Jenkins is herd manager on a 450 cow farm at Clydevale, in South Otago. Photo supplied.
When it comes to succeeding in the dairy industry, Maigan Jenkins believes passion is needed.

''You've got to want to be out there. It's not a job where you go to work just for the money,'' the young Clydevale herd manager said.

Brought up in South Otago, Miss Jenkins (21) had always enjoyed being around animals and wanted to be a vet from a young age.

When her parents moved off the dairy farm where she spent her childhood, Miss Jenkins missed farming life. She got a job helping out with calves down the road from the farm.

She candidly admitted she was not particularly keen on school - ''I didn't really agree with school. It wasn't somewhere I wanted to be'' - as she much preferred being outside working.

After leaving school, she decided she would like to make farming her career so enrolled to further her studies at Telford, a division of Lincoln University, near Balclutha.

She thrived at Telford and the practical experience it afforded and it cemented her decision to become a farmer.

She encouraged others keen on farming to go to Telford, saying it was also probably the most fun year of her life.

''There were not many times you woke up and you were like, `I don't want to go to school today.' I'd go back any day,'' she said.

After spending a year at Telford, where she completed certificates in agriculture and farm management, Miss Jenkins moved to Ashburton and worked for six months as a farm assistant on a 110-cow farm.

It was a big move, away from the familiarity of home, but it made her stand on her own two feet, she said.

''It was scary but it was good for me. Looking back now, I hated my time up there but I'm so glad I did it.''

She returned south and worked as 2IC on a 420-cow farm at Drummond, in central Southland.

Now at Clydevale, Miss Jenkins is herd manager on a 450-cow farm, working her way up to management level, which she hoped to achieve by the end of the season.

She has continued her studies through Primary ITO and was third in the junior trainee class last year and third in senior trainee this year.

She was proud of what she had achieved, having gone from farm assistant to ''almost managing'' in two and a-half years.

Her job was ''pretty full on'' and she was left with the day-to-day running of the farm, but help was available if needed.

Her boss was a believer in letting her make her own mistakes and learning from those.

He was also very good about giving her time off for her ITO commitments and she enjoyed those studies.

''It's good to just go to class, have a yarn and compare stuff with the other people,'' she said.

There was also constant learning during her day-to-day work and she was often trying different things.