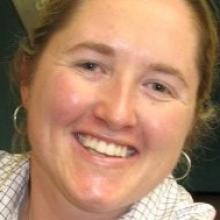 Olivia Ross.
Olivia Ross lives by the mantra: "make the most of every day".

Miss Ross (28), of Longridge North, near Balfour, is one of five young primary industry leaders to receive the inaugural ANZ Future Leaders scholarship.

Open to New Zealand Young Farmer members, the scholarship, worth up to $10,000, was designed to give future leaders in the primary sector a "step up" by providing them with financial support for their planned path of study or professional development.

Miss Ross, who is Beef and Lamb New Zealand southern South Island extension manager, planned to use her scholarship for personal development programmes.

She is taking part in the eight-day Outward Bound Discovery course in May and  also hopes to be accepted for the Kellogg Rural Leadership programme next year.

She has several projects in mind, relating to either the Future Farmer programme or improving collaboration with industry-good bodies.

She is heavily involved with Young Farmers, including as vice-chairwoman of the Balfour club, and is a member of the committee that has applied to host the grand final of the FMG Young Farmer of the Year in Invercargill in 2018. She is also third vice-president of Balfour Lions Club and a volunteer firefighter. Over the next two years, Miss Ross also intends to complete her ATCL (Associate of Trinity College London) in public speaking.