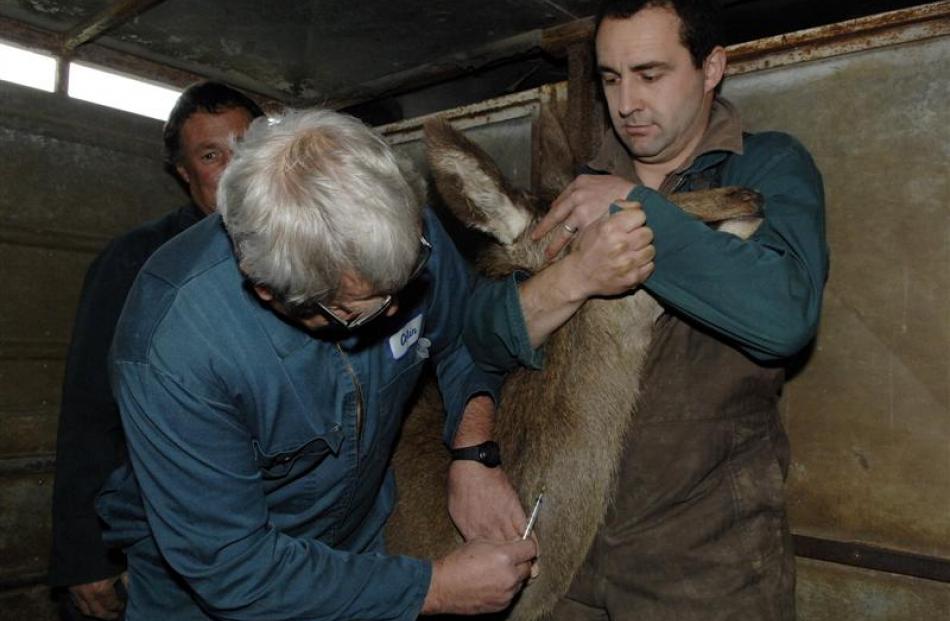 Dr Colin Mackintosh administers an anaesthetic to a deer before a CT scan at Invermay. The deer is held by research associate Bryan Thompson. 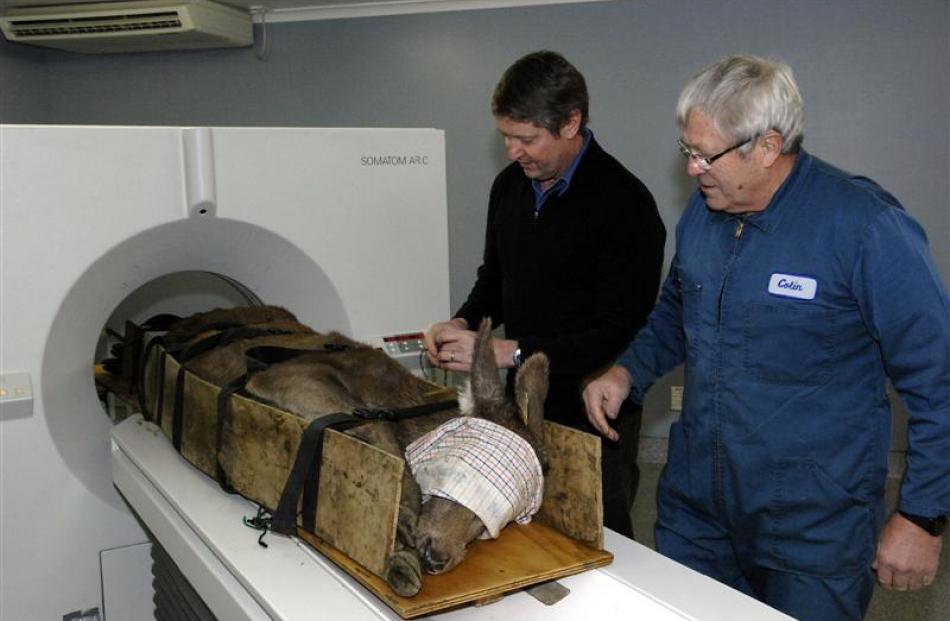 Dr Colin Mackintosh finds deer fascinating. The AgResearch veterinary scientist has spent 30 years working at Invermay, where his primary focus has been deer.

When he started, it was "more or less" the beginning of the deer industry in New Zealand and very little was known about deer diseases.

He likened it to being presented with a blank piece of paper and then spending the last three decades trying to fill in that piece of paper.

Last year, Dr Mackintosh (63) was honoured with the 26th Deer Industry Award, acknowledging his contribution to the industry.

Dr Mackintosh spent his first 18 years in Auckland and, while he lived in the city, he had lots of relatives on farms and spent his holidays with them.

That led to his decision to study to become a veterinarian and he graduated with his veterinary science degree in 1971.

That was followed by two years in general practice in Tauranga before he headed to Australia, where he did locum jobs, and then to Europe, before heading home via Africa. Working in a research laboratory near London had awakened his interest in research and he returned to Massey, where he completed a PhD in leptospirosis in 1981.

That was followed by a shift to Otago for Dr Mackintosh and his wife and fellow vet, Dr Marjorie Orr.

Some of the "nice successes" he had been involved with included the development of yohimbine, a reversal agent for sedation in deer which revolutionised anaesthetising deer and getting them back on their feet quickly, and the development of the Yersiniavax vaccine to combat yersiniosis.

New ways had to be found of controlling parasites which were becoming resistant to pour-on anthelmintics and how to breed deer for more natural resistance to parasites was also being studied.

He enjoyed working with "fantastic" colleagues and also the very good support from the industry.

"It's been a great 30 years and hopefully, I can carry on for a few more years."

It did not seem like three decades - "if there's a lot going on, time just flies and it's still flying" - and there were new challenges every day.

Dr Mackintosh, who is also the site veterinarian at Invermay, said deer were fascinating animals and he was passionate about deer farming.

He enjoyed the research aspect of his work, saying he had a "tremendous curiosity" about things. "I keep wondering what makes things tick and why things do things."

After spending half his life in Otago, he had no desire to head back to Auckland.

"It's fun to visit but I'd hate to live there.