Tracy Crossan with Trevalda Mountain Storm, all breeds supreme winner at the Canterbury A&P Show. Photo: Michelle Clarke.
On a farm near Ranfurly, there is a big grey stallion living the life of Brian.

Ballineen Blue Mountain, aka Brian, is making a name for himself in equine circles. As well as the Irish Draught’s own plaudits, success is now coming for his offspring, notably Trevalda Mountain Storm, who was recently recognised as one of five outstanding exhibits at the Canterbury A&P  Show in Christchurch.

Such an accolade was "pretty cool" and "a little bit unexpected" for Trevalda Mountain Storm’s breeder and Brian’s owner Tracy Crossan.

It was the culmination of much hard work for Mrs Crossan, who first took out a student loan when she was 19 and went on a search for a horse.

She bought an Irish hunter, one of the first crop by imported stallion Kingsway Diamond, and fell in love with the breed.

"I’ve really had at least one Irish sitting in the paddock since then," she said.

She started buying young horses, the only way she could afford to have "really nice horses", breaking them in herself and bringing them on. Then she decided to dabble in breeding, breeding close to 20 foals by Irish Draught stallion Coalmans Touch. 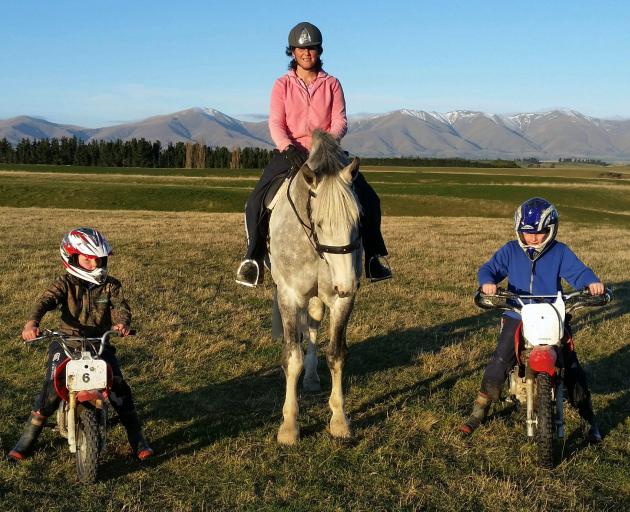 They thought if they were bringing one stallion, they might as well bring another, and looked around to see what was needed in the country.

At that stage, there was only one Irish Draught stallion so they scouted around in England and found Brian.

Brian’s breeder Enid Lord initially did not want to sell him but they managed to talk her around, Mrs Crossan said.

Brian was a fully classified stallion who had gone through the classification process in England. He was a class one stallion, the only one in the southern hemisphere with that grading. Sixty horses went forward for grading that year and only four passed with the class one grading.Brian stood at stud for one season in Hawkes Bay and Mrs Crossan had talked to his owners about using him.

When a thoroughbred mare was advertised for sale in-foal to him, she thought that would be a good option. But it had already sold so she told them to let her know if anything else came up.

Three weeks later, there was a message on Mrs Crossan’s phone saying they might have something she would be interested in — they wanted her to take Brian, as they were returning to England.She had already looked into possibly importing a purebred colt and she decided it was a great opportunity.

He arrived in the Maniototo in 2012 and during the first couple of days working with him, she set some boundaries.

"As soon as we worked each other out and knew who was in charge, he was just a totally different horse," she said.

He quickly knew his place and was very relaxed, with an "exceptional temperament".

"He’s an absolute pleasure to have around," she said.

Sons Hamish (9) and Ryan (8) groomed Brian, painted his hooves, plaited his forelock and rode him.

Mrs Crossan had been very careful to "define his jobs". He knew when he was working as a stallion and, when she was riding him, he was "totally switched on".

"He’s just a showman; he loves attention," she said.

Mrs Crossan and her husband Gavin farm a 720ha traditional sheep farm in conjunction with Mr Crossan’s parents James and Jenice. While Mr Crossan was not horsey, he had been  supportive and had proven very useful when it came to building projects, building her stables, a tack room and the infrastructure needed to collect semen from Brian.

This season had been "very, very busy" with fresh chilled semen dispatched as far afield as Kaitaia.

Those wanting to breed him  were looking for temperament, soundness and bone and he had those attributes.

"I want to make sure we stamp ourselves in Irish horse history in New Zealand. I’m pretty certain that’s going to happen," she said.

New Zealand had been "a bit slow to catch on" when it came to Irish-bred horses. An Irish Draught, when crossed with "something else", produced an Irish sport horse,  which  were competing in all Olympic disciplines.

Andrew Nicholson’s three-time Burghley winner Avebury, described by Horse and Hound  magazine as one of the greatest event horses of all time, was an Irish sport horse.

She has also imported four mares from Australia, including a mare originally imported from Ireland whose breeding was "probably some of the best in the world".

The stud took a lot of work and dedication and it was a team effort. For someone who had always been  independent and self-sufficient, it had been tricky for her to have to rely on other people.

But it required three people to collect semen from Brian and, whenever she took him out to a show, she had to have a handler with him.

"Brian babies", as she dubbed his offspring, were just starting to get "out and about", with the first ones starting to be broken in and they were proving  easy.

Trevalda Mountain Storm, known as Zak, was Mrs Crossan’s first-born by Brian and while she had bred some lovely foals over the last couple of years, which she had sold, she had always had a soft spot for Zak.

She broke him in and started him over the winter and he was "awesome" under saddle.

"He’s going to be a nice, quiet gelding in my old age," she quipped.

The five-hour trip to Christchurch for the Canterbury A&P  Show was only the second time Zak had been on a horse-float. Two weeks earlier, he had been to Alexandra to get measured.

"He coped amazingly [at the show], he was brilliant. He’s just been a breeze to do everything with. He’s very much like his father — he couldn’t really care what you’re doing to him as long as you’re paying attention to him," she said.

Zak won his 3-year-old hunter class on the Wednesday and then went on to win supreme champion in-hand horse, going forward to claim the all breeds supreme award.

That meant he was then up for the supreme livestock exhibit of the show, which was judged in the ring on the Friday.

But Mrs Crossan had always planned on returning home on the Wednesday night, as she had farm and family commitments, so she left Zak in the care of friends in Christchurch who prepared and showed him for the supreme livestock judging.

Out of all the livestock on display — ranging from poultry, goats and sheep to horses and cattle — the judges pulled forward five outstanding exhibits, including Zak.The title was eventually won by a Charolais cow and calf exhibited by the Fisher family from the Silverstream stud at Greenpark.

Zak’s success at the Canterbury A&P  Show had  opened up some big opportunities for the Trevalda stud and it was "pretty exciting".

"I only ever started breeding horses to breed the perfect horse for me. My problem now is I think I’ve cracked it," she said.