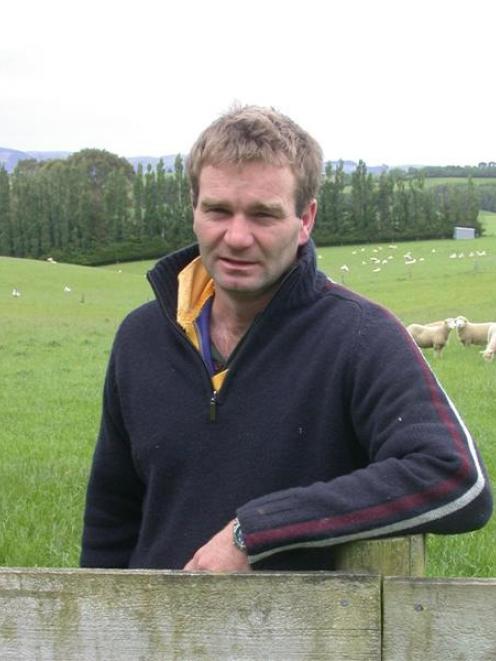 Blair Robertson, Merrydowns stud Waikoikoi, who is expanding the size of his studs because he believes sheep farming has a bright future.
Four generations of Robertsons have sold Romney rams under the Merrydowns prefix, and the latest is as enthusiastic about the future of sheep as the first.

Blair Robertson and his wife Sally are now the masters of the Waikoikoi-based stud, which was started in 1937 by Blair's great grandfather David Robertson and was subsequently run by the legendary D. H. Robertson and then Blair's father, Graham.

Today, Mr Robertson runs stud Romney and Southdown ewe flocks on the 236ha, and he is not shy in expressing his confidence in the sheep industry.

"If I won Lotto tomorrow, I would buy another farm it fill it up with Romney sheep," he said.

That optimism is based on the growing world shortage of wool and lamb, but he confesses to having a passion for farming sheep, evident by continuing the never-ending pursuit to improve carcass confirmation and the wool quality of his flock.

"If you are passionate about anything, you will do a good job with it." 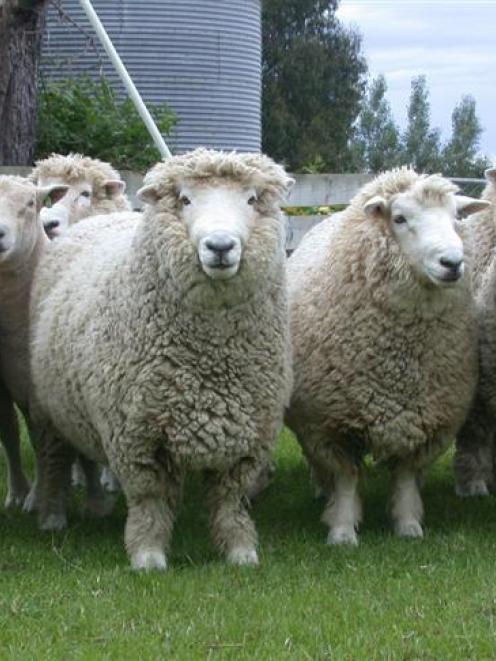 Merrydowns stud Romney and Southdowns rams. Photos by Neal Wallace.
Mr Robertson believes too many commercial sheep farmers rely on hybrid vigour for productivity gains, and said to cement in traits such as fertility, carcass confirmation and wool quality took generations of breeding, but the gains would last.

It is a philosophy he has followed since before he took over Merrydowns, which he merged with his own Wainfleet stud, in 2003.

Even when wool made $2.60 a kg and lambs $60, Mr Robertson took a long-term view towards breeding.

"We banked on the theory that if we were getting $2.60 a kg, someone with poorer quality sheep was getting $2.40 a kg. Our sheep shear 8kg and their sheep shear 4kg, but it cost the same to shear."

He measures his income and productivity on the basis of dollars per stock unit, and said quality was a key driver of that calculation.

For that reason, he sees performance recording systems such as Sheep Improvement Ltd (SIL) as a breeding tool, not a marketing tool.

"We're of the opinion we're breeding sheep, not indexes."

He said a high-ranking ram on SIL might not have all the attributes needed by farmers, and he said ram selection still came down to quality control and selection for genetic traits needed by commercial farmers.

When he selects rams, he leaves breeding data at home and eyes the soundness of each ram lamb from the ground up.

It is important to be impartial so selection was not based on breeding.

"Once I have a line that I like on type, I will put them up the race and look at the figures."

The result is an annual sale of about 180 two-tooth rams, the top 25% of rams from each breed.

Sheep breeding was ingrained in Mr Robertson from a young age.

He had his own Romney stud, Wainfleet, as a child and was making decisions about which ewes went to which rams.

Mr Robertson said he was fortunate to buy the Wainfleet prefix and some ewes from the established and respected breeder, John Sutton.

When he took over Merrydowns in 2003, he decided to combine the two flocks.

On leaving school Mr Robertson spent time in 1992 in South America, working on a Romney stud, and in 1997 worked on an Angus stud in North America.

He also worked with legendary Canterbury sheep breeder Tug Burrows, in what he said was an intentional move to surround himself with and learn from leading livestock breeders.

Mr Burrows had Romney, English Leicester and halfbred sheep and Hereford cattle, and Mr Robertson said a key to his education was to work with people who had different opinions and ideas, so his own thoughts and ideas were challenged.

On leaving Canterbury, he returned to the home farm at Waikoikoi and eventually took over his family's studs.

Ewes shear 8kg and his rams, which were shorn as lambs in late February, were shorn again in late July and clipped 5kg. Lambs are killed at 17kg to 32kg.

His love of stud breeding was difficult to describe but it was a passion he says he was born with.

He likened his enjoyment and dedication to a sportsman wanting to constantly improve performance in the same way he wants to improve the quality of sheep he bred.

Those sheep were different from what his family bred in the past, but Mr Robertson said it was not fair to be critical, as the the type of sheep they bred suited the needs of commercial farmers of the day.

Today his rams are more moderately framed, selected for productivity, carried more meat and had more open legs and head.

Looking ahead, Mr Robertson intended increasing the size of stud to not only give him a larger selection base, but also as also a conscious vote of confidence in the industry.