Stint as ocean-going shepherd an eye-opener 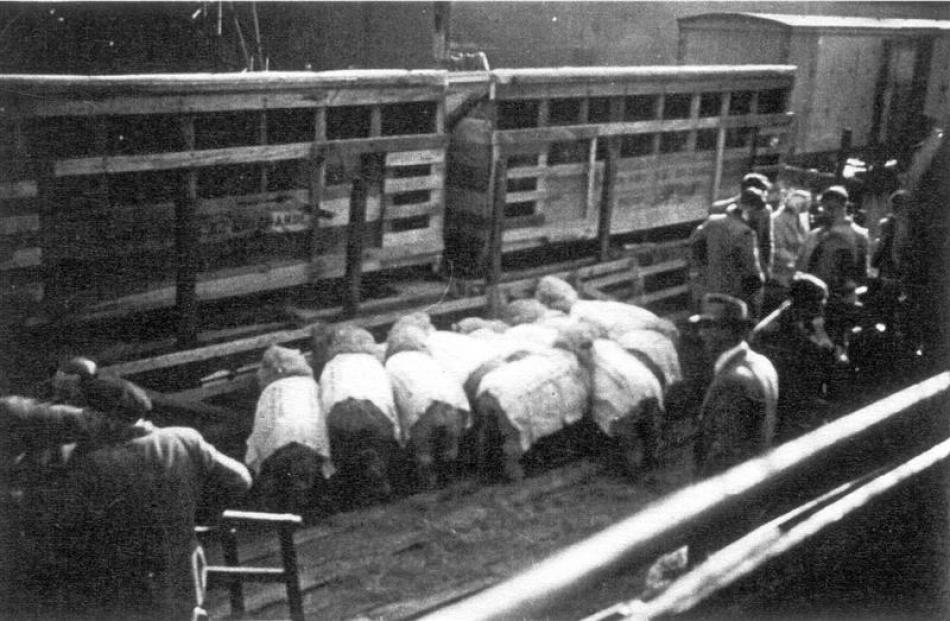 Sheep destined for Brazil on board the New Zealand Shipping Company's Papanui. Photo by Fred Ellis.

When Fred Ellis boarded a ship at Port Chalmers in 1957 in charge of a consignment of stud sheep bound for Brazil, he was ''dead scared''.

His only previous sea experience was crossing Cook Strait on the Wellington-Lyttelton ferry in his school holidays.

It reminded him of his own exploits 57 years ago and he wondered where the sheep came from and how many subsequent exports of sheep to South America there had been.

It was during a casual conversation with the manager of a Wellington wool store, where he was wool-classing, that he mentioned he would like to go overseas before he ''settled down''.

He forgot about the conversation until a couple of months later, when he was asked how serious he was, as a shipment of stud sheep was leaving Port Chalmers two weeks later.

The plans of the pair who were to take the 140 sheep around Cape Horn to Brazil as deck cargo had fallen through and replacements were urgently needed. If he could find a mate, he would be offered the job.

An old school friend, Gavin Dowling, was working in the same store and he readily agreed.

They arrived at Port Chalmers in time to see the sheep being loaded on to the New Zealand Shipping Company's vessel, the 10,000 tonne Papanui.

It was a refrigerated cargo vessel taking lamb to the United Kingdom and the live sheep were housed in 14 purpose-built, covered wooden crates, secured by wire hawsers.

Each crate contained 10 sheep, comprising merinos, Corriedales and Romneys, both rams and ewes.

''Frankly, both of us wereprivately dead scared. For my part, my only sea experience of ships was the Wellington-Lyttelton ferry on which I had travelled during school holidays,'' Mr Ellis said.

About 1am on the second night, he was awoken by a crew member who told him a large wave had dislodged some crates.

One crate was completely smashed and some sheep were wandering about the deck.

The pair's main job was to feed and water their charges and clean the pens during the 18-day voyage.

As they entered lower latitudes, the weather became increasingly colder and wetter and there was less daylight, until it was dark about 3pm and dawn at 9am.

On arrival, a reception on board had been arranged by the importing agents, Wilson and Sons, so the importing farmers could see the sheep before disembarking.

''I remember the officers' saloon full of non-English-speaking gaucho farmers who had filled their pockets with some oats still in the corners of the troughs. These quickly littered the carpet, causing annoying frowns from the captain.

''One farmer ... who spoke a little English, asked if there were any more and I naively said that there were nearly four sacks he could have. However, we learnt later that the subsequent crop was a failure.''

Mr Ellis' next 13 months in South America, working in the wool trade, were also a steep learning curve.

He had to learn the language and ''every now and then'' he would meet someone who could speak English.

The quality of sheep was not ''terribly good''. They were able to teach the South American farmers a lot, and learnt a lot, too, he said.