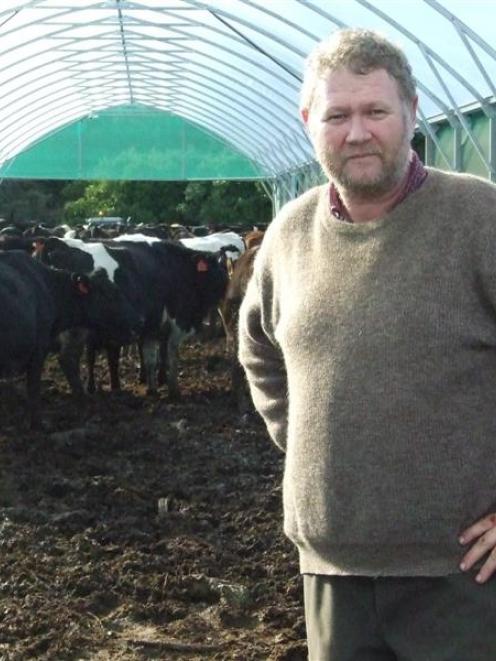 Telford dairy farm manager Justin Pigou enjoys working alongside students and sharing his knowledge. Photo by Hamish McLean.
Having worked in the dairy industries in both Africa and New Zealand, Justin Pigou says they are like ''chalk and cheese''.

Now dairy farm manager at Telford, a division of Lincoln University, in South Otago, Mr Pigou (50) is sharing his experiences in the industry.

Brought up in Zambia, he was from a farming background, which included beef, sheep, tobacco, cropping, maize and soya beans.

He studied at an agricultural college in the United Kingdom and it was during that time that he met his future wife, Gaylene, during her OE.

It was now Mr Pigou's second time working at Telford - he worked there in the early 1990s, before going sharemilking for six years and then into an equity partnership.

He then left the dairy industry and did a teaching degree. He taught for a year and then accepted a job in Zambia in 2007.

He spent two years on an 800-cow dairy unit, trying to sort out the unit and increase production. There were issues around having the funding to do the things he wanted to do and he left to go to a job in the Sudan, setting up a dairy unit on what was previously a desert site.

He was then offered a job in Zambia, as funding had surfaced, so he returned in 2012.

The majority of dairy farming in Africa was containment dairy. Cows were housed all year round, although there was potential for grazing systems. The farm where he worked in Zambia was one of the first to establish Italian ryegrass, growing it under centre-pivot with ''very spectacular results''.

They were producing probably double the New Zealand milk production average, averaging around 30 litres a day and with year-round milking, although there were high input costs.

The milk price was around NZ65c-70c a litre, which was one of the highest in the world.

But herds were not large in Zambia and he estimated there were between about 20 and 25 commercial farms.

While there was potential for dairying to grow in Zambia, there was not so much in Sudan, due to climate. Temperatures there reached 50degC in summer.

Mr Pigou jumped at the opportunity to return to Telford. Already familiar with the facility, he liked the idea of passing on some of the things he had learnt.

It was also a challenge, as there was a lot of work still to be done on the property.

While a new 54-bail rotary dairy shed was opened in July 2012, the potential of both the land and facilities was not being realised and he wanted to start pushing production figures and efficiencies.

Mr Pigou also enjoyed working alongside students and passing on his knowledge. More people were needed in agriculture and there were ''huge opportunities'' in the sector which were only going to get better over the next few years.

There were very few career pathways like the dairy industry, where someone could ''go from nothing to farm ownership within a relatively short period of time'', he said.

Mr Pigou was also relishing the opportunity to be back involved in farming in a hands-on way.

In Zambia, his role was very much management and there was a very large labour force that did most of the day-to-day work. He was also on the board of the Dairy Association of Zambia.

He estimated he had probably milked only 100 to 200 cows over the past seven years and to be outside ''actually working with cows again'' was very nice.

However, arriving back in New Zealand during winter had come as something of a shock, having left temperatures in Zambia of around 25degC. Mr Pigou's son, Ryan, has followed in his footsteps and is a herd manager on a Milton dairy farm, and his daughter, Megan, is a midwife in Balclutha.