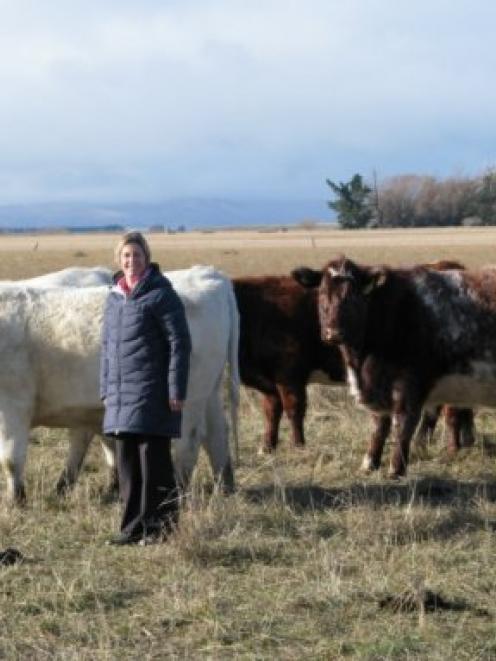 Bev Helm with some of her rising 3-year-old cows which are second calvers. Photo supplied.
Maniototo stud cattle breeder Bev Helm was thrilled to achieve the top price at the South Island Shorthorn sale in Temuka.

Rough Ridge Primo 1004 sold for $10,200 to Bill Callwood, of Northland. It was also the top-priced Shorthorn bull in New Zealand this year.

Mrs Helm, who farms at Gimmerburn with her husband Malcolm and their three children, was "absolutely stoked" with the result.

They took four bulls to the sale and averaged $6325, also selling the second top-priced bull at $7400.

Rough Ridge Primo was a bull that the couple had seriously thought about retaining in their stud.

Describing him as a thick-muscled bull with a good head and good bone, he was a "soft, easy doing sort of bull", she said.

Mrs Helm bought 14 Shorthorn cows from Nic Clarke 16 or 17 years ago, her interest whetted by her father who had always liked the breed.

Since then, she had added to the numbers, most recentlybuying eight cows at Austins' Shorthorns dispersal sale in South Canterbury in March.

Stud breeders from throughout New Zealand and also the UK competed strongly for cattle from the renowned stud.

The Helms have about 40 stud cows this year and were keen to continue to lift numbers, ideally taking a larger number of bulls to future South Island sales.

Mrs Helm liked the breed's good nature and also the look of them - "they have grown on me even more since I got them".

She also enjoyed the genetic side of stud breeding. They imported semen last year from an Australian bull and were looking forward to the progeny.

The Shorthorn is one of the oldest British breeds, with a recorded history of well over 200 years. The first Shorthorns in New Zealand were two cows and a bull that arrived from Australia in 1814.

At the Atahua Angus sale in the North Island, 44 bulls sold for an average of $10,900. Otago stud breeders were among the buyers with Fossil Creek buying a bull, jointly with the Sudeley stud from Canterbury, for $36,000. Earnscleugh Station, in Central Otago, paid $28,000 for a bull, and Waimara Angus (East Otago) and Nethertown Angus (Middlemarch) bought a bull together for $20,000.