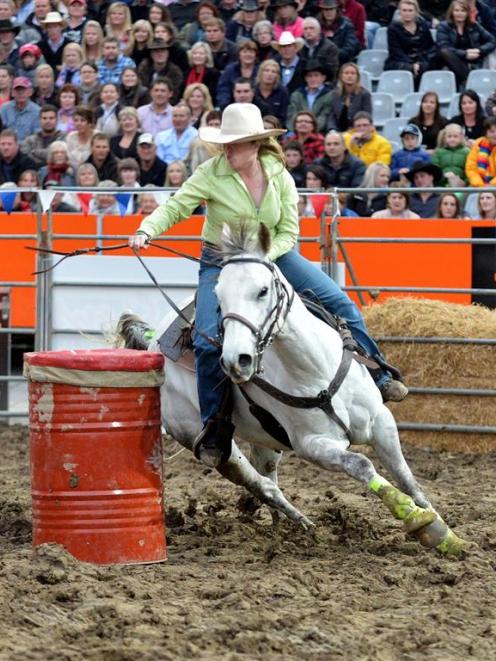 Olivia Ross is more used to a saddle on a horse than one on a bicycle. Photo by Stephen Jaquiery.
A cycle seat is not the sort of saddle that Olivia Ross is ordinarily accustomed to.

But Miss Ross (27), a keen equestrian rider and barrel racer, has been enjoying a change of horsepower.

As Beef + Lamb New Zealand's southern South Island extension manager, a keen Young Farmer, and supporter of all things rural, she has embraced Farmstrong, an initiative launched in June last year to promote wellbeing for farmers.

The programme, which is a joint initiative between FMG Insurance and the Mental Health Foundation, aimed to help shift the focus of mental health from depression and illness to wellbeing.

Farmers could access practical tools and resources that would help them take care of themselves, with information on topics such as nutrition, managing fatigue, exercise, the importance of getting off the farm, and coping with pressure.

It also helped farmers connect with each other and share experiences, including such initiatives as the Farmstrong Fit4Farming cycle tour.

In March, the inaugural tour will travel the length of the country to raise awareness about the benefits of being more active for rural communities.

Until then, there was the Farmstrong Challenge as a twist on the traditional cycle tour. Farmers, staff and families were encouraged to walk, run or cycle to achieve a goal of 4million kilometres of physical activity by July.

The actual tour, which runs from March 18 to April 2, will travel the country, with a core ‘‘peloton'' of 20 farmers and sponsors riding from Ngatea to Bluff to raise awareness about the importance of keeping fit on the farm.

Miss Ross, who acknowledged she was ‘‘used to four legs'', has been training to cycle from Cromwell to Millers Flat.

She was also involved with organising the last of five key stops throughout the country, at Gore on April 1, and was trying to get 100 farmers to cycle the 63km from Gore to Winton, with an option for those ‘‘less enthusiastic'' to ride 23km from Hedgehope.

Schools were also getting involved, making banners to have along the roadside. It was all about participation, rather than a race, she said.

Once riders reached Winton, there would be a celebration of Farmstrong and rural communities and what such communities were all about, she said.

Last month, Miss Ross racked up just over 100km on a road bike borrowed from a farmer and she was ‘‘quite enjoying it''.

‘‘It's something really new to me. It's a great way to keep fit and get rid of those Christmas puddings,'' she said.

With people leading such busy lives, it was often difficult to find the time to exercise, but she encouraged farmers to get involved.

While farmers were generally fairly fit, sitting on a cycle was a ‘‘totally different'' fitness, she said.

They could register online and she advised them not to leave training until the day before, or they might not be able to walk for a few days afterwards.