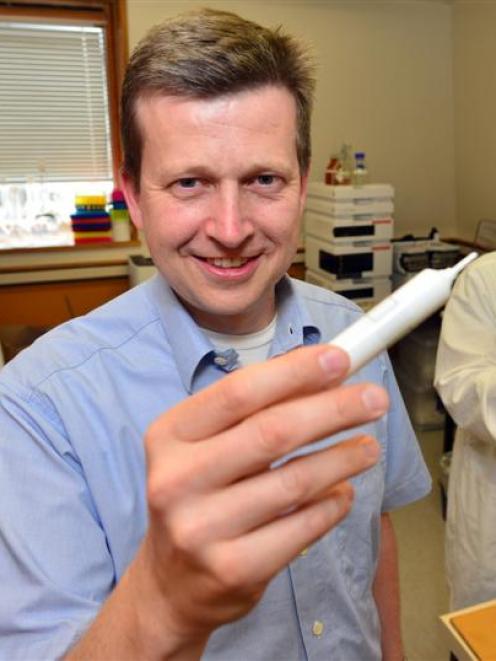 Dr Olaf Bork (front) works on mastitis research in the laboratory at the University of Otago's school of pharmacy, along with Dr Rohit Jain (left) and Chris Wicky. Photo by Peter McIntosh.
A mastitis product, developed through the nationally collaborative Mastitis Research Centre, involving researchers at the University of Otago, could result in significant savings to New Zealand's dairy industry.

Mastitis, which is inflammation of the udder, is a major financial burden to the dairy industry, both in New Zealand and globally.

It was a finalist in three categories - innovation in environment and agriculture, innovation in health and science, and innovation excellence in research, in the recent New Zealand Innovators Awards.

It involved a novel formulation approach which enhanced efficacy of mastitis treatment and shortened the period during which milk must be compulsorily dumped.

The research at the University of Otago was led by Prof Ian Tucker and Dr Olaf Bork and it was ''quite an exceptional'' situation in that it was sponsored by industry, Dr Bork said.

X-imm24 had been through the development phase and gone through a large trial with ''fantastic results'' and it was now in the registration process.

The first market would be New Zealand and Dr Bork hoped it could be on the market by the end of next year. There was potential that it could go further afield in the future.

While it could result in substantial savings in the industry, those savings were hard to estimate, he said.

Mastitis was a disease that was a massive problem globally. Existing products on the market were between 20 and 30 years old yet the milk yields of cows had significantly increased over the years, there was a much more commercial focus and cows were under more stress.

X-imm24 had taken less than five years to develop which was extremely fast for the animal health industry, he said.

It was very exciting to be involved in developments in all stages from an idea through development, animal trials and then the registration and patent processes, he said.

The team was ''absolutely excited'' to be named as finalists in the awards and were driven to bring and develop more innovation.

The problem was not going to be solved with a single potential innovation, the situation was much more complex and required much more sophisticated research.

At the same time, the research had to be able to be transferred from academic institution to the development stage, he said.

There were a ''number of other things in the pipeline'' they wanted to further evaluate, Dr Bork said.