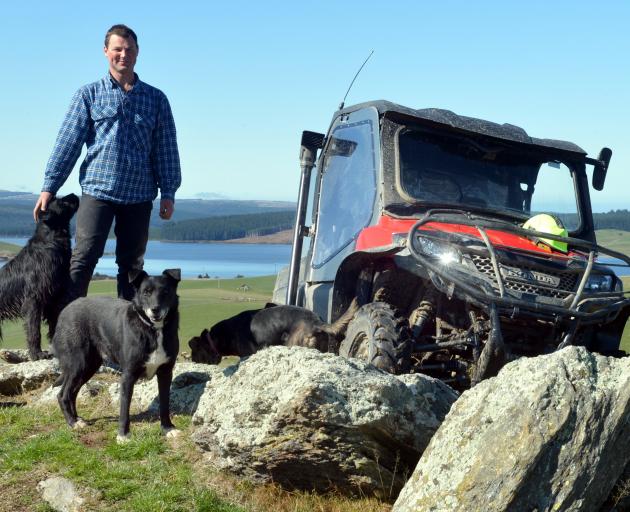 Thornicroft Station deer manager Caleb Neilson with one of the new side-by-side ATVs to be used on the property. Photos: Stephen Jaquiery.
It's out with the old and in with the new with vehicles on Landcorp-owned farms.

Keeping people safe was the driver behind a review of vehicle safety by New Zealand’s largest corporate farming operation.

The review established a set few vehicles to be used on the basis of what worked for particular farms and terrain.

By the end of this year, quad bike numbers would be down to about 100 from more than 300 last year and they would be fitted with roll cages.

Quad bikes now redundant from Landcorp properties are moved by truck and trailer.
Quad bike safety has been a hot topic in New Zealand.

On average, 850 people are injured  and five die each year while riding quad bikes on farms.

There was now a range of quad bikes, side-by-side ATVs and motorbikes that farm staff could use on about 140 farms throughout the country, a Landcorp spokesman said.

The property, which runs 21,0000 stock units, comprises rolling hill country with steep gullies and has five staff, including Mr Cunningham.

Doors had been fitted on the new side-by-sides at Thornicroft.

It could get "bloody cold" and the doors gave some protection from the elements for staff.

"There’s a reason why those ... are there," he said, indicating the nearby wind turbines on the Mahinerangi wind farm.

Dog boxes on the back of the vehicles could take four or five dogs quite comfortably.

There were no issues with staff embracing safety measures, which included always wearing a helmet when riding ATVs, he said.

The side-by-sides would not operate unless a seatbelt was worn and their speed was governed.

They were also fitted with Farm Angel, a transmitting device that would activate if the bike overturned.