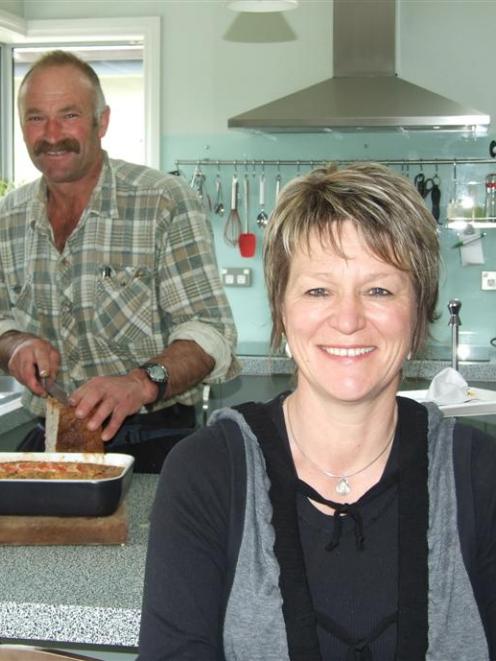 That is the message from Nellie McNab, who farms with husband Peter at Lochindorb, between Clinton and Owaka.

Mrs McNab made the plea at Wednesday night's post-storm support meeting in the Balclutha Town and Country Club.

The meeting was attended by about 120 people.

Mrs McNab also questioned why support meetings, organised by Federated Farmers, were focused on beer drinking, saying she did not think it was a good idea to offer alcohol to already depressed people.

And she wondered why so few women attended the gathering.

Farmers' wives were also under emotional pressure, she said.

"It's made out to be a man's thing. I don't think we are considered. They wouldn't be here if it wasn't for their wives."

Federated Farmers national president Don Nicolson, who was at the meeting, told the Otago Daily Times yesterday Mrs McNab's comments were pertinent and he understood where she was coming from.

"With regard to the storms, the women and children have been out there doing as much as their dads and husbands," he said.

The meetings had been advertised as family events and there had been varying numbers of women in attendance at each of the three meetings.

Federated Farmers was not a chauvinistic organisation.

While he hoped farmers' wives could turn to Federated Farmers, other supporting organisations were available for them if they felt they could not.

Mrs McNab acknowledged Federated Farmers had been excellent in organising support for farmers but she was critical of the sorts of events being hosted and was "really annoyed [at] having all these beer shouts".

Mrs McNab asked why Federated Farmers could not substitute tea, coffee and meals, and let people buy their own alcohol.

Wives were also worrying about their husbands attending beer shouts when they were already tired, and then driving home again, Mrs McNab said.

Mr Nicolson agreed the last thing people needed to be doing was going out and having "a leer-up", and while people at Wednesday's meeting might have had a couple of drinks, nobody imbibed too much.

Mr Nicolson said he approached Mrs McNab after she made her comments, and had what he believed was "a really good chat".

Mrs McNab said yesterday her biggest stress was watching her husband and his distress over all the dying calves.

"Every time Peter comes in and says there is another dead calf, my heart goes to my stomach," she said.

"He was doing everything physically in his power ... but it was just so bitterly cold they were still dying ... he was getting to the stage where he couldn't even lift them anymore because he was so tired."

Farmers tended to be very staunch and turned down help when it was offered, she said.

"They don't think about how this is affecting us ... We go through it more emotionally than they do," she said.

"I go to so many of these things and women aren't there."

Wives needed to be at the meeting.

"It seems women don't think it's their place to be at these things, or they are not interested. At a time like this, they should be."