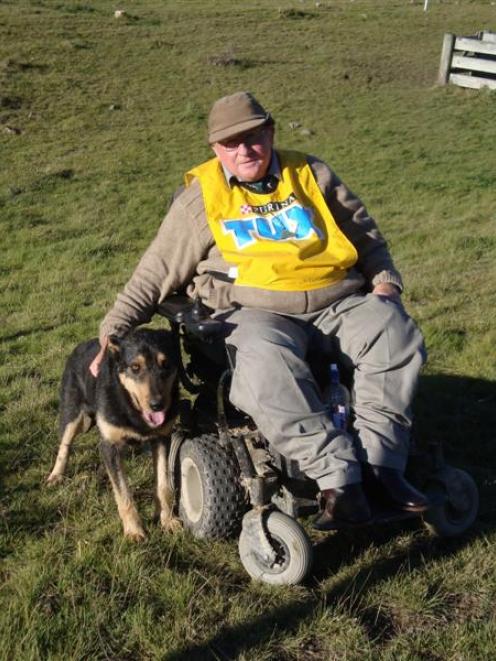 Grant Calder pats his dog Cramp after winning the South Island zigzag hunt championship at Hakataramea. Photo by Margaret Vickers.
Grant Calder pulls no punches when he says "life in a wheelchair is a bit of a s ... ".

However, he hopes his remarkable success at the recent South Island sheep dog trial championships will send a message to disabled people that "it's not the end of the world".

Mr Calder (63), from Lauder Station in Central Otago, broke his neck in a quad-bike accident on his property in 2004.

Earlier this month, he and his young dog Cramp won the South Island zigzag hunt championship at Hakataramea, which he described as "a dream that's come true".

No-one in a wheelchair had previously won an island title and the win was "very special" for disabled people, he said.

When he left Burwood Hospital, he thought his dog trialling career was over. He could not even blow his whistle.

But the determined farmer had a goal of being able to work a dog again and, with the support of his family, he has not only managed to work a dog but train one to compete at the top level of the sport.

He has had to adapt his training methods to break in a dog from his wheelchair, saying he now had to do it "totally differently".

Unable to handle ropes, which he previously used, he welded "all sorts of bits and pieces" to the front of the wheelchair, which had a pole in the front.

Halfway through breaking in Cramp, when he was "doing no good", he decided to design a harness, which had proved "brilliant", particularly given the limited use of his hands.

Two-year-old Cramp was bred out of a bitch of Sam Jamieson's by Mr Calder's son Robert's good dog Hood.

Mr Calder has high praise for Cramp, who he had only run at five trials, saying he reckoned he was as good as any dog he had owned at that age.

The pair were "best of friends" although he was treated no differently to the other dogs in Mr Calder's team.

At Hakataramea, the hunt course was "very, very hard" and New Zealand's top triallists were competing.

While Mr Calder was used to working merino sheep, which were used on the hunt courses, there were 250 competitors "that could walk".

He ran his first dog when he was 7 and said he did not get nervous.

"Determination will blow nerves out the window."

He attributed his success to the great team behind him.

'My family take all the credit,"he said.

Without their support, he would not be at the trials.

Mr Calder has been helping several "young fellas", who came from farms and who have had accidents and were in Burwood.

He hoped his success would send them a message.

"I've now proven it's not the end of the world."