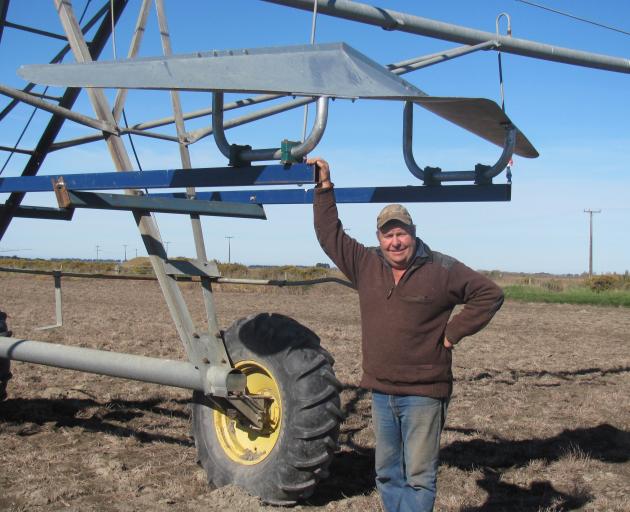 Greg Lovett stands under the irrigator stabilising wing. Photo: Maureen Bishop
The design trials are over; now the field trials have begun for a new irrigator ''wing'' aimed at providing stabilisation in times of high winds.

The galvanised wing is the brainchild of farmer Greg Lovett and kite-maker, inventor and engineer Peter Lynn.

The high winds of spring 2013 which destroyed hundreds of irrigators, prompted Mr Lovett to look at some method of stabilising irrigators which could prevent them toppling over.

He sought expertise advice from Mr Lynn. As a pioneer of kite surfing and buggying, and the holder of the record for the world's largest kite, Mr Lynn knows a lot about wind and its power.

The pair, with help from others such as Snow McKenzie, of Ashburton, have designed the 3sqm steel wing, which can be fitted to irrigators.

Recently they took delivery of three of the wings from a Chinese manufacturer and fitted them to irrigators on Mr Lovett's farm.

Early designs were tested by fitting them to a Unimog vehicle and testing it on roads around the farm. Now the wings are out in the field, waiting for a real test in high winds.

Mr Lynn said the wings were designed to cope with winds up to at least 120kmh. He is sure they will prevent irrigators from tipping over in winds of that speed.

He is confident the design is right, although production methods may change to get a lower cost per unit.

A wing is needed on either side of a pivot but it may be possible to get away with just one wing fitted to laterals, Mr Lynn said.

Although the men have applied for patents for their stabiliser in both China and New Zealand, they have not yet named the product.

The product has been examined internationally and passed with flying colours, Mr Lynn said.

''Itdoes the job, it is needed, it is economic, it solves a problem, has no moving parts and is just a single piece of steel,'' Mr Lynn said.

''We just had the right team in the same place at the same time.''